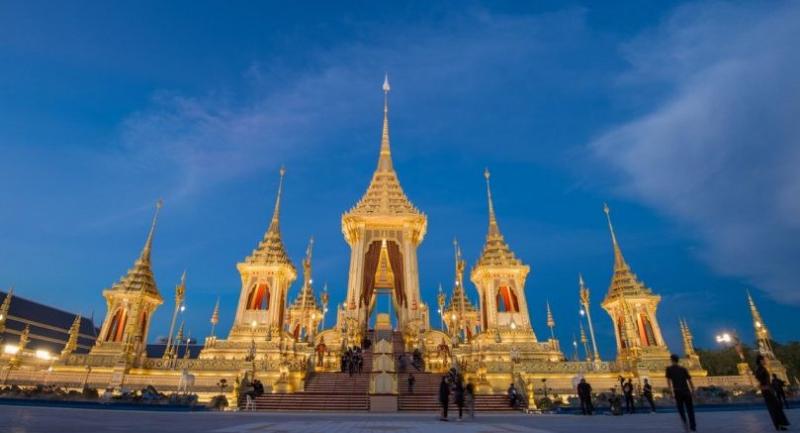 ONE OF THE more intriguing aspects of funeral rites for a Thai king or queen is a tradition dating to the Ayutthaya Period known as “Luk Phra Sop” – stealing the royal body.

The term “stealing” is used only because the ritual takes place beyond the public’s view, and at nighttime.
“There is no official announcement of the ceremony, but the process will be recorded in the Royal Archives,” said a leading historian on the matter, Chitssanupong Titalakana.
In his book “Thamniam Phraboromasop Lae Phrasop Chao Nai”, published by Matichon, Nontaporn Yumangmee explained that the tradition began as a means of avoiding delays in the funeral ceremony.
Transporting the ruler’s remains to the crematorium at the same time royal processions were taking place would have caused unnecessary delays and also affected transferral of the royal regalia.
“For the sake of convenience in preparing for the cremation ceremony, the process of transferring the deceased is done during the tranquil night on the eve of the cremation.”
As an example, Nontaporn wrote that Prince Mahamala Kromphra Bamrab Porapak lived on Na Phra Lan Road, far from the cremation grounds, so for his funeral in 1886, his remains had to be taken first by boat to Wat Phra Chetupon and then to Sanam Luang.
Doing so on the day of the cremation would have taken too much time in past ceremonies.
He pointed out that the many mourners camping close to Sanam Luang in hopes of getting the best vantage points when the gates open will be able to witness in the early hours of tomorrow the Luk Phra Sop motorcade travelling from the Grand Palace to the crematorium.
“They should realise that this tradition is taking place and be absolutely silent, to show the greatest respect for His Majesty King Bhumibol [Adulyadej].”
Chitssanupong confirmed that changes have been made amid the strict traditions of the occasion.
Since the King’s remains rest in a coffin and not an urn, the Royal Urn instead contains a golden plaque bearing his full name and birth date.
With citizens expressing curiosity about Luk Phra Sop, the “Thai Historical Archives” page on Facebook recently posted historical documents about the ceremony.
The funeral pyre itself, or Phra Chittakathan, has been modernised. Electric burners are now used, as seen for the first time at the cremation of Her Royal Highness Princess Galyani Vadhana in 2008.
They were introduced because of a near-mishap at the cremation of Her Royal Highness Princess Mother Srinagarindra in 1996, when the flames almost got out of control and disrupted the ceremonies.