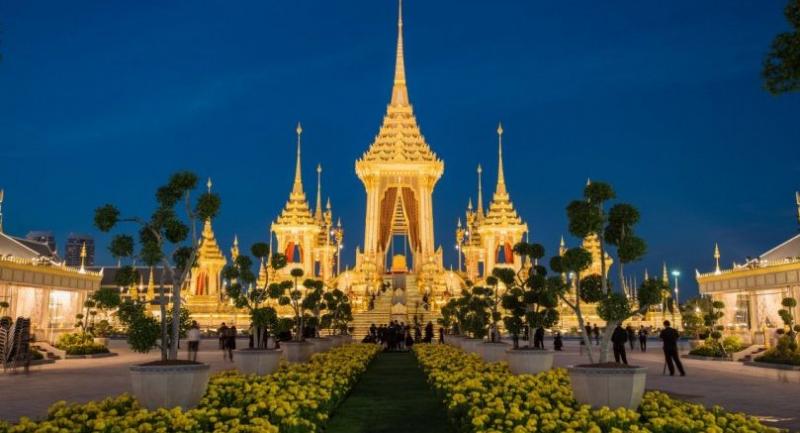 Crematorium open to public from November 2-30

STARTING from Thursday, people will be able to visit the gold-gilded Royal Crematorium for HM the late King Bhumibol Adulyadej.

The grand structure will welcome visitors from November 2 until the end of the month. In addition to the main feature, exhibitions and performances will honour the late monarch. The compound will be open each day from 7am to 10pm.
Up to 5,000 visitors will be admitted at one time to the compound, where they will be able to explore the zone in front of the Royal Crematorium, which represents the mythical Mount Sumeru. The landscape reflects many royal initiatives of the late, hard-working monarch.

Visitors can also check out exhibitions inside several buildings in the compound. While most of them are about the life and works of the late King, there is also an exhibition on the construction and concept of the Royal Crematorium. One exhibition is specially designed for the visually impaired to ensure that even though these visitors cannot see the grand structure with their own eyes, they can feel them by touching sculptures on display. Hand-language guides will be on hand to provide assistance for the hearing impaired.

Visitors will be given just one hour inside, before officials clear the area for the next group of visitors to ensure as many people as possible get the see the exhibitions.
Music will play in the compound from 8am to 5pm. There will be various kinds of performances from 6pm until 10pm and Khon shows will be performed at weekends.
Visitors have to comply with a dress code: No shorts, sleeveless blouses or spaghetti-straps are allowed, but women may wear trousers, provided they are “polite”.
The Royal Crematorium has already been in the spotlight for many months because it was a key structure for the Royal Cremation Ceremony for the late monarch, whom Thais regard as the “Father of the Land”.