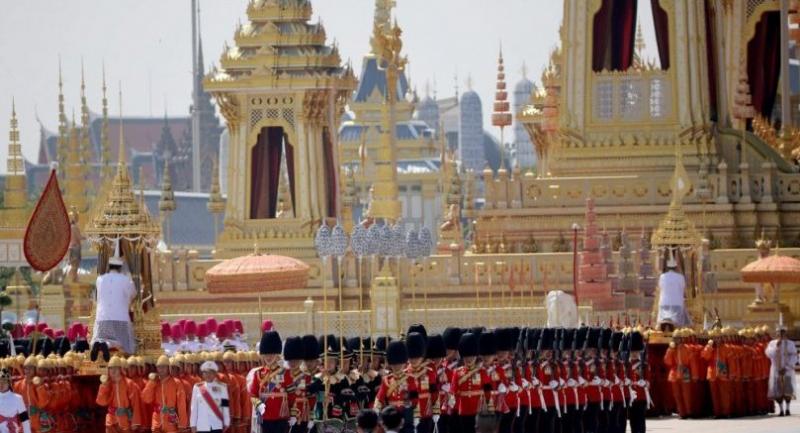 Mourners weep as royal relics, ashes head to palace and the temple of the emerald buddha

HIS MAJESTY King Maha Vajiralongkorn presided over the Royal Ceremony for the collection of the late King Bhumibol Adulyadej’s Royal Relics and Royal Ashes from the Royal Crematorium in Sanam Luang and their transfer to The Grand Place yesterday morning.
HM the King arrived at 8.45am, accompanied by members of the Royal Family including Her Royal Highness Princess Maha Chakri Sirindhorn, HRH Princess Chulabhorn Valayalaksana, HRH Princess Bajrakitiyabha, HRH Princess Sirivannavari Nariratana and Princess Ubolratana Rajakanya.

HM the King collected the late monarch’s Royal Relics, which were reshaped into a human figure and wrapped with cloth before giving robes to nine monks led by His Holiness the Supreme Patriarch Ariyavongsagatanana for chanting prayers.

Later HM the King divided and stored them in six Royal Reliquary Urns. The main Reliquary Urn was transferred to The Grand Place for a merit-making ceremony. Five of the urns were shared with the late King’s immediate family including King Rama X, HM Queen Sirikit, Princess Sirindhorn, Princess Chulabhorn and Princess Ubolratana. The Royal Ashes were collected into cone-shape container that will be placed tomorrow in two royal temples, Ratchabophit and Bovoranives.
After chairing the collection of the late monarch’s Royal Relics and Royal Ashes, the officials transferred them to Songtham Pavilion, to be received by another 30 venerable monks from royal temples throughout the country.
Thirty monks then chanted a prayer. After the monks’ prayer, the King gave them food, robes and the royal cabins used for storing the Tripitaka or Bali Canon which were made especially for the Royal Cremation.
After the merit-making for collection of the Royal Relics and Royal Ashes, the King and Princess Sirindhorn joined the procession for transferring the Royal Relics and Royal Ashes from the Royal Cremation at the Sanam Luang ceremonial grounds to the Dusit Maha Prasat Throne in The Grand Palace. Princess Ubolratana, Princess Bajrakitiyabha and Princess Sirivannavari also joined in the procession.

The fourth procession, which featured the Royal Reliquary Urns containing the Royal Relics, was transferred to the Royal Palanquin with Four Poles – or Rajendrayan Busabok Palanquin – from the Royal Cremation to Dusit Maha Prasat Throne in The Grand Place.

The Royal Ashes in the cone-shaped container on the small Palanquin with four poles – or Rajendrayan Noi – was transferred to Phra Sri Rattana Chedi in the Temple of the Emerald Buddha. Supporting the Royal Reliquary Urn, and the Royal Ashes in a cone-shaped container, were the late monarch’s personal doctors, Dr Pradit Panchavinnin, director of Siriraj Piyamahakarun Hospital, and Dr Prasit Watanapa, Dean of Faculty of Medical at Siriraj Hospital.

During the three-hour ceremony for the collection and transfer of the Royal Relics and Royal Ashes, huge crowds carrying the late monarch’s portraits paid their final respects with tears in their eyes for their beloved King. Many of them stayed overnight on Thursday, Royal Cremation Day, at the Sanam Luang ceremonial grounds in order to witness the fourth procession.
Thursday night at 10pm was the memorial moment where the ceremonial grounds fell silent. The live TV broadcast, which was supposed to air the actual Royal Cremation, was suddenly cut off.

Viewers were left in some doubt about what was happening. Thousands of mourners at Sanam Luang were also in the dark, as the private Royal Cremation was done exclusively involving members of the Royal Family.
The silence was finally broken when the smoke was seen streaming from the Royal Crematorium at around 10.30pm. The sound of mourners weeping echoed around the ceremonial grounds, while dancers on stage performed their final farewell, sending the late King’s soul to heaven.
According to Thai tradition dating back to the Ayutthaya era, the public performances began the signal of the official ending of the mourning period. The authority announced that the mourning period would end tomorrow.