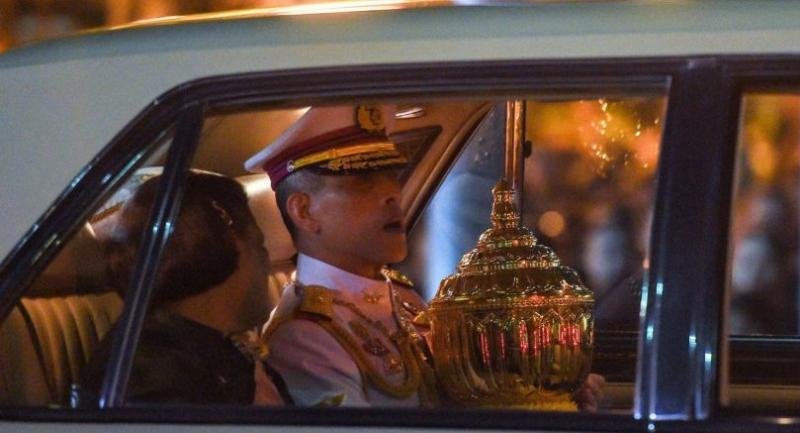 THE FIVE-DAY Royal Cremation Ceremony for His Majesty the late King Bhumibol Adulyadej ended yesterday with the highest tributes to the “King of Hearts” and “Soul of the Thai people”.
The ceremony began on Wednesday but thousands of mourners were still camped out yesterday at the Sanam Luang ceremonial grounds and along the route of the last procession transporting the Royal Ashes to their final resting place at two of Bangkok’s hallowed temples.
Since dawn yesterday, black-clad mourners were seated along the roads from the Grand Palace to Wat Rajabopidh Sathitmahasimaram and Wat Bovoranives Vihara as they wished to witness the final farewell for the much-revered monarch.
The final day of the Royal Cremation Ceremony for the late King started yesterday morning with religious rites and the fifth procession to transfer the Royal Relics from the Dusit Maha Prasat Throne Hall to be enshrined in the Heavenly Abode of the Chakri Maha Prasat Throne Hall.

His Majesty King Maha Vajiralongkorn arrived at the Dusit Maha Prasat Throne Hall in the Grand Palace at 10.30am to preside over the religious rites. He was accompanied by members of the Royal Family including Her Royal Highness Princess Maha Chakri Sirindhorn, HRH Princess Bajrakitiyabha, Princess Ubolratana Rajakanya, Her Royal Highness Princess Siribhachudabhorn and Her Royal Highness Princess Aditayadorhkitikhun.
After lighting candles to pay respects to the late monarch in front of his Royal Reliquary Urn, 30 venerable monks led by the Supreme Patriarch His Holiness Ariyavongsagatanana chanted a prayer.
The next session featured five monks led by Phra Phrom Methi from Wat Samphantawong giving a sermon.
They were followed by another 89 monks – their number relating to King Bhumibol’s age at death – who performed ritual chants.
After the three-hour religious rite, the King and Royal Family members joined the procession featuring the Rajendrayan, or Royal Palanquin with Four Poles, carrying the Royal Reliquary Urn to the nearby Chakri Maha Prasat Throne Hall.
The Royal Palanquin with Four Poles was carried by 56 men while the fifth procession included a troop of 550.
Supporting the Royal Reliquary Urn was the |late monarch’s personal doctor, Dr Pradit Panchavinnin, director of Siriraj Piyamahakarun Hospital. The procession covered the 63 metres in about 10 minutes.

The late monarch’s Royal Relics then were kept in the Throne Hall’s Heavenly Abode, alongside the Royal Relics of Kings Rama IV through VIII.
In the evening at 5.29pm, the sixth procession began the last elaborate procession of the Royal Funeral as a troop of King’s Guard cavalry transferred the Royal Ashes from Phra Sri Rattana Chedi in the Temple of the Emerald Buddha in a car to Wat Rajabopidh and Wat Bovoranives.

Royal Family
The Royal Ashes were carried on Phra Saliang, or small palanquin with two poles, before being transferred to the motorcade procession, in which His Majesty King Maha Vajiralongkorn and |Her Royal Highness Princess Maha Chakri Sirindhorn accompanied their father’s ashes to the two temples.

The second route ran from Wat Rajabopidh to Atsadang Road, Sanamchai Road, Ratchadamnoen Klang Avenue, Phra Meru Road and Wat Bovoranives.
Dressed in her military uniform, the multi-talented Lt-Colonel Princess Sirivannavari is a commander of the 29th Cavalry Battalion King’s Guard. She led troops of the 2nd Division Royal Palace Guard Cavalry and the Metropolitan Police Commission.
The precise performance of the cavalry procession resulted from extensive training for the event. Princess Sirivannavari’s horse, W-Calata, an 11-year-old Holsteiner mare from Germany, has been highly trained and has won many show-jumping equestrian events in Europe. The horse is 170-centimetres tall and suitable for short-walking according to the rhythm of the procession.

The 29th Cavalry Battalion included 78 horses selected for their physical appearance and colours according to royal traditions. Each horse appeared to be in good condition, obedient and highly trained, which was very important as they traversed the city roads and were required to move both forwards and backwards.

The most difficult part of the training was matching each rider with a horse, as riders had to be able to control their horses with one hand holding the bridle and while the other hand was holding a weapon. It took three months of training both the horses and the riders to familiarise them with each other.
Grieving people broke into tears, particularly when the procession moved from Wat Rajabopidh to Wat Bovoranives by passing Sanam Luang against the backdrop of the illuminated Royal Crematorium.

Mourners prostrated themselves to show respect as it seemed the entire nation came to a standstill.
The procession later wended along Ratchadamnoen Avenue where the silence was broken only by the sound of horse hooves. When another portion of his Royal Ashes rested at the final destination – beneath the base of Phra Buddha Chinnasi at Wat Bovoranives, it signified the actual departure of the divine King from Earth.
At Wat Rajabopidh, King Bhumibol’s Royal Ashes were laid beneath the base of the Phra Buddha Ankhirot, the temple’s main Buddha statue, situated in the Phra Ubosot ordination hall. Also beneath the statue are the remains of Kings Chulalongkorn and Prajadhipok (Rama VII) and the latter’s consort, Queen Rambhai Barni.

At the west side of the temple is a royal cemetery that King Chulalongkorn established for the internment of the remains of his queens, consorts and descendants. It contains more than 30 memorials of varying designs. One of the Rangsi Vadhana holds the cremated remains of King Bhumibol’s parents – HRH Prince Mahidol of Songkhla and HRH Princess Srinagarindra – and his elder sister, HRH Princess Galyani Vadhana.

The other temple, Wat Bovoranives, is where King Bhumibol resided while he was ordained as a monk in 1956. The Phra Ubosot houses the revered Phra Buddha Chinnasi, a statue believed to have been sculpted in 1357, and his Royal Ashes |were enshrined at its base, near those of King Rama VI. Wat Bovoranives was established in 1829 under King Rama III.
The temple is where Kings and princes have traditionally spent time as monks, including King Bhumibol and his son, King Maha Vajiralongkorn. The temple’s first abbot in 1836 was Prince Mongkut, who was a monk for 27 years and abbot for 14 years before being crowned King Rama IV.