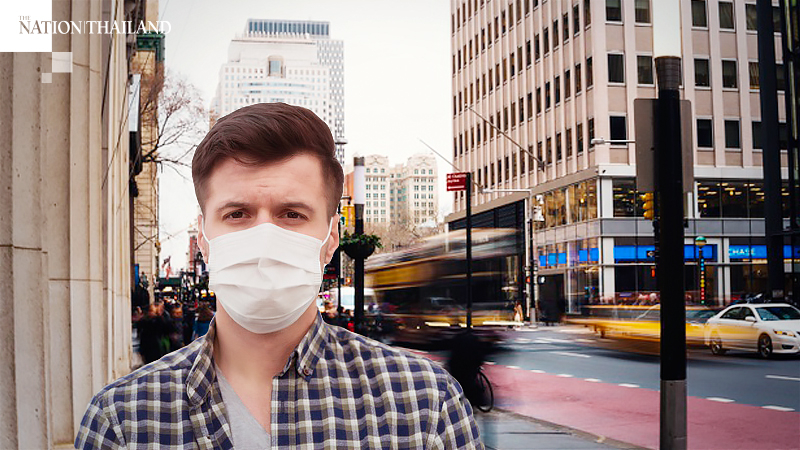 They have emerged as an unlikely symbol of partisan divide and a source of bottomless derision for President Donald Trump.

But masks on Wednesday moved ever closer to becoming a new national reality in America's pandemic-scarred life, with businesses, states and health experts preaching their promise as the country's last line of defense against a fast-growing viral threat.

Even as the White House continued to resist pushing for a national mask mandate, evidence abounded that face coverings were becoming a de facto requirement - and not only in big cities where they have been in widespread use for months.

Alabama's governor, who leads one of the country's most conservative states, on Wednesday said people would be obligated to wear masks when leaving the house. The announcement, which came as Alabama recorded a new single-day novel coronavirus death record, means nearly half of all states now have a mandate.

The world's largest retailer and a staple of rural communities nationwide, Walmart Inc., issued the same requirement for shoppers in its stores. A powerful trade group quickly embraced the choice, raising the prospect that other major chains will soon follow.

"Shopping in a store is a privilege, not a right," said the National Retail Federation. "If a customer refuses to adhere to store policies, they are putting employees and other customers at undue risk."

The moves came only hours after Robert Redfield, director of the Centers for Disease Control and Prevention, declared that coronavirus outbreaks - now raging across much of the country - could be "under control" within one or two months if the public adopts widespread mask use.

So far, that hasn't happened - despite a toll that on Wednesday topped 134,000 deaths and hit nearly 3.5 million cases. Health experts say that if masks aren't more routinely used, governors will have little choice but to continue rolling back economic reopenings as cases surge.

Trump has led the charge in casting doubt on mask use, mocking those who don one and refusing for months to wear one in public. He has recently endorsed their use, but only grudgingly, and late last week wore one in public for the first time.

Trump's contempt has been emulated by rank-and-file Republicans, who polls show are significantly less likely than Democrats or independents to wear masks, as well as by GOP officeholders.

One such official, Oklahoma Gov. Kevin Stitt, on Wednesday became the first state chief executive to announce that he has tested positive for the coronavirus. Just over three weeks ago, Stitt appeared unmasked at a Trump rally in Tulsa, where the president joined thousands of others in dispensing with face coverings.

Stitt said he felt "fine" and would be isolating. The governor, who urged residents to flock to restaurants early in the outbreak even as other state leaders were shutting down, said he did not believe he had contracted the virus at Trump's rally.

The news came as Oklahoma reported more than 1,000 new coronavirus cases - a single-day record as the average number of new deaths also increases.

In Florida, which has the dubious distinction of leading the nation with an average of more than 10,000 cases a day over the past week, hospital officials said they had seen a spike in covid-19 patients that caught them off-guard.

Carlos Migoya, president and CEO of Miami's Jackson Health System, Florida's largest hospital group, told CNN on Wednesday that the number of patients with covid-19, the disease caused by the coronavirus, jumped from 129 on June 14 to 420 patients on July 14.

One of the main culprits, he said: resistance to wearing a mask.

"The biggest issue is that we have a lot of aggressive noncompliant people, people that just do not believe that masking is the right thing to do," Migoya said. "A lot of the young people are saying, 'So what if I get it? If I get it, it doesn't mean anything.' "

The evidence that masks are effective in stopping the spread of the coronavirus has existed nearly as long as the virus itself has. But the messaging about whether the public should wear them has often been muddled.

Early on, the country's top scientific and medical officials warned against them.

"Seriously people- STOP BUYING MASKS!" U.S. Surgeon General Jerome Adams tweeted in late February as the coronavirus was beginning to circulate in communities across the country. "They are NOT effective in preventing general public from catching #Coronavirus."

He changed his mind in early April, telling the public that "the better part of valor when you're out and you can't maintain that six-foot distance is to wear some type of facial covering."

Trump, however, has remained resistant and has mocked Democratic rival Joe Biden for wearing one. That has, in turn, fed conservative suspicion of masks as an infringement on personal liberty - a refrain repeated at city council meetings nationwide and in viral videos as shoppers insist on their constitutional right to not mask up.

Health experts on Wednesday applauded Alabama Gov. Kay Ivey, a Republican, and Walmart for doing what the federal government has not, which is to insist that masks are not a choice.

"It's the right thing to do. We can't afford for this to continue as an us-versus-them issue or as a science-versus-politics issue," said Marc Hahn, president of the health-sciences-focused Kansas City University. "We've got to come to a point where we can adopt sound public health strategies."

And the time for that is limited, Hahn said. He compared the drive to promote masks to the push for mandatory seat belt use in the 1970s.

The urgency was underscored by Ivey's decision Wednesday, which came after prominent public health officials in her state urged a mandate.

Coronavirus hospitalizations and new cases in Alabama have risen sharply in recent weeks, while daily covid-19 deaths have hit a record high for the third time in six days. The state reported 47 new deaths Wednesday, and on Tuesday, it reported 1,365 current hospitalizations, though officials say some of the recent increase stemmed from a change this week in hospital reporting methods.

More than 20 other states have mask mandates, including California, Maryland, New York and Virginia. Some states, such as Ohio and Texas, require masks only in counties where coronavirus infection rates have hit a high level. Ohio Gov. Mike DeWine, a Republican, had attempted to institute a statewide mandate in early May before backing down in the face of fierce resistance.

Walmart's decision to require masks - with its potential to alienate the company's clientele in red states and rural areas - echoed its choice last year to end the sale of ammunition following a mass shooting at its store in El Paso, Texas.

The Arkansas-based retailer announced the mandate in a Wednesday news release, citing the recent resurgence in U.S. covid-19 cases and the need for consistency across its operations. Walmart said roughly 3,500 of its more than 5,300 namesake stores and Sam's Club locations already comply with public health mandates in their respective markets.

"We know some people have differing opinions on this topic," according to the news release from Dacona Smith and Lance de la Rosa, the chief operating officers of Walmart and Sam's Club, respectively. "We also recognize the role we can play to help protect the health and well-being of the communities we serve by following the evolving guidance of health officials like the CDC."

The CDC on Tuesday stepped up its efforts to promote masks, publishing an editorial in the Journal of the American Medical Association that concluded "cloth face coverings are one of the most powerful weapons we have to slow and stop the spread of the virus - particularly when used universally within a community setting."

The agency pointed to the example of two hair stylists in Missouri, both of whom exhibited covid-19 symptoms for days as they snipped and cut and both of whom later tested positive for the virus.

But because they were wearing masks, as required by law, investigators found that "none of the stylists' 139 clients or secondary contacts became ill, and all 67 clients who volunteered to be tested showed no sign of infection."

Redfield told an interviewer Tuesday that mask-wearing may be the key to allowing businesses to stay open and, if employed widely, could set the United States on a very different trajectory.

"If we could get everybody to wear a mask right now," he said in a JAMA Live webcast, "I really think in the next four, six, eight weeks, we could bring this epidemic under control."