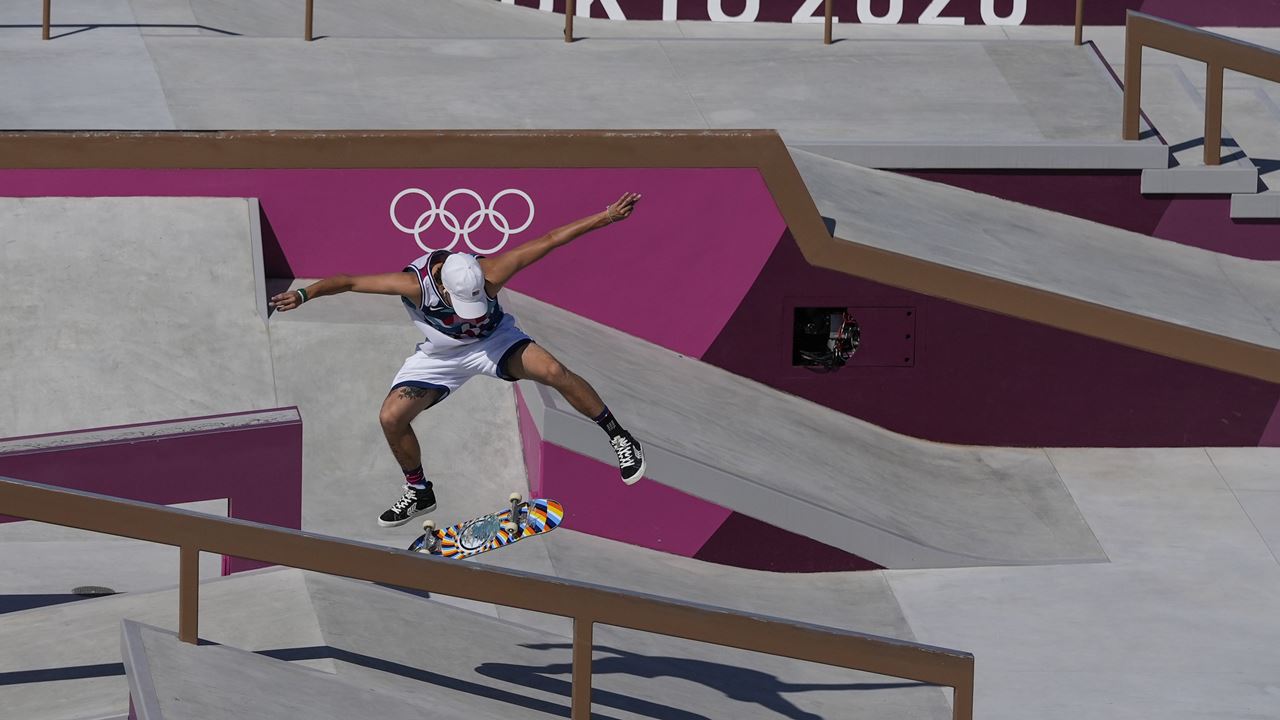 In Olympic debut, skateboarding learns to take itself seriously

TOKYO - Jagger Eaton had just won the first Olympic skateboarding bronze medal ever Sunday morning, so he started running. He ran off the course at Ariake Urban Sports Park, through a tunnel under the stands and across the road outside.

Somewhere behind him was the gold medalist, Japan's Yuto Horigome, standing with his country's flag around his shoulders. Photographers were taking Horigome's photo. But Eaton kept running, too happy with his new medal to stop for pictures, too.

On the day street skateboarding debuted in the Olympics and a sport once derided as the pastime of misfits went mainstream, the 20-year-old from Mesa, Ariz., wasn't going to scoff at his bronze medal with the indifference of a longtime skater too jaded to celebrate something as establishment as the Olympics.

So Eaton kept running. He ran behind the media tent, around the wooden practice half-pipe and up the steel outdoor stairs that led to the skaters' locker room on the second floor of a temporary building. He raised his arms and began chanting "U-S-A! U-S-A! U.S.A!"

"Other [skateboarding] competitions just aren't the Olympic Games and that's a fact," Eaton said, after he finally had stopped running. "Anybody who tells you that it isn't is lying."

Skateboarding has brought to these Olympics a strange convergence of cultures, mixing the boundaryless world of street skateboarding with the more rigid, often uptight structure of more traditional sports. For those accustomed to the stoic marches of swimmers or the fierce determination of gymnasts, the silly, almost giddy cool of the street skateboarders Sunday had to be jarring.

The sport itself is essentially a competitive form of the invisible competition street skateboarders have with themselves on ledges or park railings or the concrete stairs of office building plazas. The Ariake Urban Sports Park was designed to replicate such places with a layout of ramps and stairs and railings in front of a wall of blue bleachers, empty except for a sea of writers and photographers. It is not like any other summer Olympic playing surface. Almost to emphasize this, the skateboarders rolled off the rails and ledges with carefree laughs.

"What can skating give to the Olympics?" asked American star Nyjah Huston, who has a body covered with tattoos and 4.8 million Instagram followers. "Some great competition, some new vibes, some new energy that I think was kind of needed."

The skateboarders all talked about how they are great friends both in and out of contests, as thrilled for each other's success as they are when a pal on a street corner lands on his board after flipping off a building ledge. They referred to each other as "homies" and constantly gave bro hugs when a competitor walked past.

But an unfamiliar urgency trickled through all the easygoing banter Sunday. Though the street skateboarding Olympians regularly compete in leagues and events such as the X-Games, the Olympics had become something very much different for them. They had become packaged and marketed, pushed into a glossy world that seemed new. It's one thing to brand for skateboard and clothing companies that sell a vision of being an outsider. It's quite another to be pushed toward a world that has never so much as glanced at kids skating off the walls in the park.

There was tension Sunday, and it got to many of them. Huston, who is Horigome's prime rival and was a medal favorite, crashed on all four of his final trick attempts in the finals, landing on his backside each time.

As the finals wore on, Eaton kept pulling his phone from his shorts, changing the music that pumped into his tiny wireless earphones, going from Playboi Carti to country in honor of his suburban Phoenix roots to ultimately Lil Wayne's "John" on his final trick attempts because nothing gets him hyped like Lil Wayne's "John."

"The most high-pressure situation of my life," Eaton called it.

This was no X-Games. And no one felt that intensity Sunday more than Horigome, who was competing in the very ward, Koto, where he grew up learning to skate at a local park. Skateboarding is not fully embraced culturally in Japan, and several questions to him Sunday were about how there are official signs in the neighborhoods around the Olympic grounds banning skateboarding.

Though Horigome lives in California now he seemed to be carrying the hopes of many here that a gold medal somehow would change public perceptions of skateboarding. Among the other skateboarders, Horigome is respected for his willingness to try things the others would never attempt. "A progressive skater," Eaton called him.

On Sunday, he looked tense, at one point sitting on a ledge with his head down, looking distraught when an early run did not go well. But when he landed his final trick, earning a 9.3 out of 10, he raced off the course with a wide, relieved smile.

Asked later, in a news conference, what his victory meant for skateboarding in Japan, he did not smile.

"I would like to commemorate the beauty of skateboarding going forward," he said in Japanese.

Beside him, Eaton couldn't stop grinning. As a child, his family ran gymnastics gyms, and the Olympics were always something revered in their home. And even though he eventually turned to skateboarding, captivated by the feeling of freedom the board gave him, he also understood the power of what an Olympic medal means. As he sat at the news conference, he caught the eye of Brazil's Kelvin Hoefler, the silver medalist, and laughed if for no other reason than he still couldn't believe what had just happened.

Eaton was asked where he planned to display his medal. He paused. He had no idea.

"I don't even have a house," he said, still a skateboarding kid, trying not to grow up on the day street skateboarding became adult.