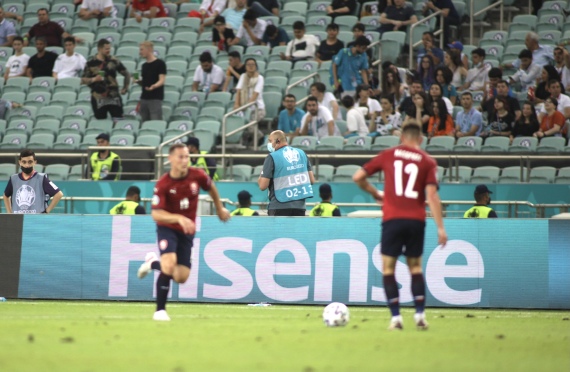 enmark advanced into the semifinals at Euro 2020 following a 2-1 win over the Czech Republic here on Saturday.

The team whose victory at the 1992 tournament was regarded as a miracle, will play either Ukraine or England at London's Wembley Stadium next Wednesday.

This was Denmark's first quarterfinal at the European Championship since 2004, when they went down 3-0 against the Czechs, but they soon proved that the result just belonged to the past.

The Czechs then managed to send many free kicks and crosses into the box, but Denmark defended well to maintain the scoreline.

Minutes before the end of the first half, Denmark launched an attack from the left flank with Joakim Maehle running deep to send in a wonderful cross. Kasper Dolberg cooly steered the ball into net to make it 2-0.

The Czech Republic pulled one back four minutes after the interval as center forward Patrik Schick tucked Vladimir Coufal's cross into the bottom corner to grab his fifth goal of the tournament.

Denmark still had chances to score late in the second half but Czech goalkeeper Tomas Vaclik made them fruitless with at leat two great saves.

However, the 2-1 victory was enough for Denmark to continue their Euro 2020 journey which has been quite emotional and unbelievable.

"We make history that we achieved the semifinal now," Stryger said. "It's been many many years ago since Denmark was there. ... We know Denmark is going crazy right now."

The Danes suffered a traumatizing moment when midfielder Christian Eriksen collapsed on the pitch due to cardiac arrest in the first half of their first group match against Finland in Copenhagen on June 12.

Denmark chose to resume the game later on but lost to Finland 1-0. Then they were defeated by Belgium 2-1, but thrashed Russia 4-1 in the last group match to advance into the knockout stage as the runners-up of Group B.

Prior to the victory over the Czech Republic, Denmark thrashed Wales 4-0 in the round of last 16.