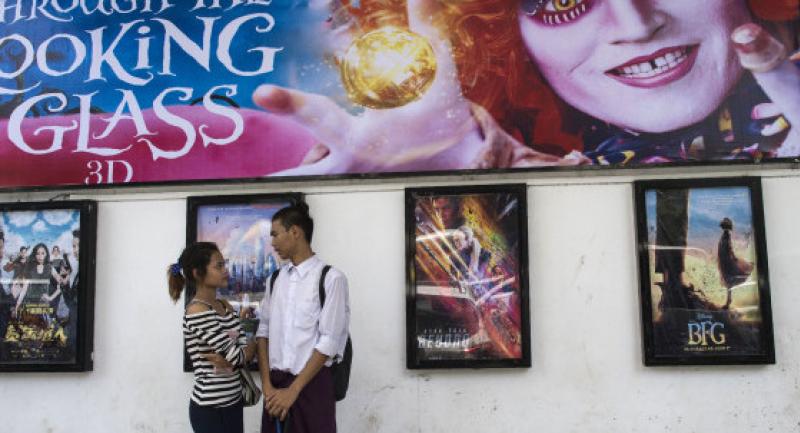 A couple standing next to movie posters at the Naypyidaw cinema in downtown Yangon. Photo/AFP

With turquoise columns propping up a pink and yellow portico, Myanmar’s art deco style Thwin cinema is a rare relic from a golden age of movie-making that dazzled audiences more than half a century ago.

Myanmar’s film industry, once the most vibrant and prolific in the region, shrivelled under a military regime that smothered the arts and ravaged the economy during its ruthless 50-year reign.

Now as the fledgling democracy emerges from the doldrums of junta rule, the stage is set for a film industry renaissance.

But the first step is repopulating the poor country with cinemas.

In its heyday Myanmar had nearly 400 theatres spread across its hilly terrain. Today only some 50 remain, mostly in urban Yangon.

“That is not enough for 53 million people,” said Tin Maung Win, a garrulous businessman trying to bring movies back to the masses with a plan to build 100 new cinemas in two years.

The Thwin is the only theatre still selling tickets on what used to be known as Yangon’s “cinema row” – a major city artery that once boasted six movie houses.

The others have been knocked down to make room for more lucrative development, while one stately cinema dating back to the 1920s has been boarded up for years.

The dearth is even more pronounced in the rural and impoverished provinces, where theatres have all but vanished after they were sold off by the former military regime.

Tin Maung Win and his business partners were inspired to take up the “100 cinema project” after hearing about a 2012 film shot near the border with Thailand, where local actors were unable to see their work because there was no screen for miles.

“We got this idea that we needed to create cinemas all over Myanmar,” he said, sitting next to a model of the low-cost, one-screen theatres with 300 seats, where tickets will go for around a dollar (Bt35) each.

While they will not rival the grand movie houses built during the industry’s peak, the hope is that a rapid increase in theatres will inject cash into an industry where the majority of movies now go straight to DVD.

Myanmar’s motion picture industry reached its peak in the 1950s – a time when optimism was flowing after independence from Britain and before the army seized power and clung on for five decades.

Stylish stand-alone cinemas like the Thwin cropped up in towns across the country, with crowds filling their teak wood chairs to watch romances, thrillers and foreign movies.

In the country’s inaugural Academy Awards ceremony in 1952, the first best picture award went to “Chit Thet Wai”, a tale of love between a city boy and a country girl who must contend with a jealous sister.

But after its 1962 power grab, the junta increasingly leaned on the industry to crank out socialist propaganda.

Scripts were vetted by censors, who issued stringent and often bizarre bans on everything from ghost stories to blue jeans in a bid to ward off foreign influence.

“The quality kept decreasing,” said Mighty, a director who has been in the business since the 1980s and feels his generation was robbed of the chance to reach their creative potential.

“They intentionally made it so we did not become educated people,” the 51-year-old, who only goes by one name, said of the country’s military oppressors.

“Now there is no one who knows about the art of film perfectly,” he added.

Censorship has eased since the end of junta rule in 2011 and horror flicks are now a box office favourite.

But many say that despite growing freedoms and improved technologies, mainstream production houses have yet to veer off script and grapple with political issues or other sensitive topics.

A class of Burmese students at the Yangon Film School responded with an emphatic “no!” when asked if they liked contemporary Myanmar movies during a break from analysing scenes of “Taxi Driver”, the 1976 American classic starring Robert De Niro.

“They (Myanmar films) are somehow good in technical skills, like colour grading, and sound design,” said student Myat Minn Khant. “What annoys me are the stories and casting. The keep making the same cheesy stories.”

Myanmar’s leading man Lu Min, who looks to Tom Hanks as an idol, concedes that many directors still rely on tired story lines and cost-cutting shortcuts.

But he says the desire is there to raise the bar. “Some people are trying hard to improve our industry,”  he said during a break from filming his latest action thriller.

He and hundreds of other actors, producers and directors recently gathered to discuss industry reforms at a three-day forum called “Time to Change”.

Many are pushing to see the government’s censorship board revamped as a ratings committee that only warns viewers of racy or violent content.

Lu Min is also hoping that rebuilding the country’s network of cinemas will be the launchpad. “Our film industry depends on the quantity of theatres,” he added.