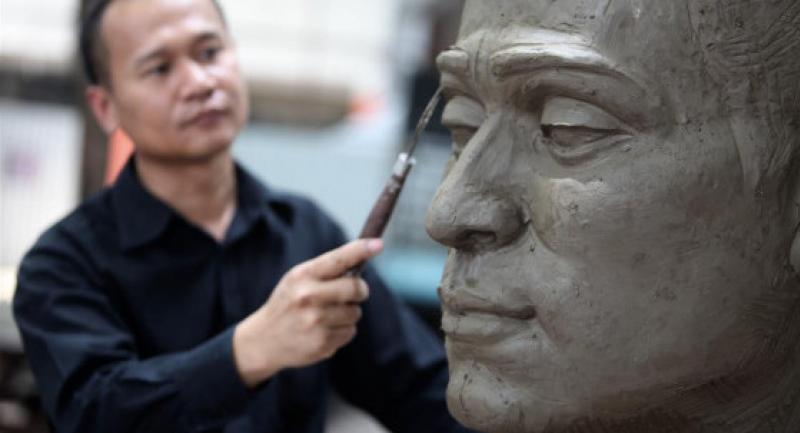 Pongpan Chantanmattha works on the clay model for a largescale bust of His Majesty that will be rendered in white marble. Hinon Co is donating the stone quarried in Saraburi.

THESE PAST WEEKS, amid tears and aching hearts, artists and art students across Thailand have been rendering portraits of His Majesty King Bhumibol Adulyadej in public places, but youngsters at Silpakorn University, led by sculptors Pongpan Chantanmattha and Khemarat Kongsook, have taken on monumental missions.

Near the statue of the school’s founder, Silpa Bhirasri at Silpakorn’s Tha Phra campus, Pongpan’s students are creating a likeness in clay of the King at age 19, when he ascended to the throne.

The 87-centimetre-tall bust, titled “Phra Bhumibol”, will be moulded in plaster within two months. Pongpan will then spend the next 10 months sculpting it from a 500-kilogram block of white marble. The final piece – standing 89 centimetres tall, signifying His Majesty’s age – will be completed in time for the royal cremation.

“We usually see bronze sculptures of the King,” Pongpan points out. “Marble is rarely used because sculpting it requires great skill, and high-quality marble is quite expensive.”

As rare as the marble itself, the chance to devote their efforts to the King’s memory – and to history – represents an important moment for the students. The small team assembled for the project began their work on October 24 and will remain involved in the process throughout the year.

Pongpan, 42, sees it is a valuable lesson for them, in both art and in the perseverance that His Majesty always counselled.

Now an associate dean of painting, sculpture and graphic arts, Pongpan was an adviser to the students who in the days after the King’s death painted the remarkable array of nine portraits of the King on the front wall of the university facing the Grand Palace.

“Carving marble is very complicated – it requires patience, precision and careful planning,” says Pongpan, who studied at the Academy of Fine Art Carrara in Tuscany on an Italian government scholarship.

“I decided to use white marble because it’s natural and pure and represents the power of nature, as reflected in the title ‘Phra Bhumibol’. Phra means ‘superb’ or ‘purified’.”

Carrara sits in a region famed for its white marble. Eight years ago, while Pongpan was still studying there, he sculpted a 60-centimetre-tall bust of the King in that very |marble.

While working previously in the monuments division of the government’s Fine Arts Department, he’d

wondered why the country had no marble statues of its monarchs. “So when I went to Italy I took a plaster model of the King to carve there. And when I went to buy the marble, the quarry owner asked whom I planned to carve and I told him King Bhumibol. He gave me the marble for free.”

That sculpture has ever since been kept out of sight at the Fine Arts Department, given the widespread belief that royal monuments should not be made before the ruler’s death lest they incur bad luck.

Like others, Pongpan’s piece has instead been of value in teaching the craft. For “Phra Bhumibol” he was able to study sculptures of the King made by Silpa Bhirasri and Sanan Silakorn. He also scrutinised Silpa’s model of King Taksin in Silpakorn’s Sculpture Hall.

He had proposed a King Rama IX monument before, but the idea was deemed inappropriate. So he turned his attention instead to King Rama IV, creating the two bronze sculptures now displayed at Saranrom Palace in Bangkok and Khao Wang Palace in Petchburi and another in marble in front of Chomklao Hospital in Petchburi.

He is fully prepared to honour King Bhumibol in the same way.

“This sculpture will be in the contemporary style, realistically human but with a peaceful Buddhist ges

ture. His Majesty was handsome and his anatomy perfect. Physically, he was square of face, with a sharp nose and a little bit broad in the ears.”

Pongpan will get a 500-kilogram block of white marble from the well-reputed Hin-on Co in Saraburi, like Carrara another renowned source of the stone. The company is charging nothing for the marble, happy to help the sculptor pay tribute to the King.

Meanwhile, at Silpakorn’s Sanam Chan campus in Nakhon Pathom, National Artist Khemarat and his team are fashioning an even bigger bust of His Majesty – 3.5 metres in height. The clay model will eventually be re-rendered in fibreglass.

Khemarat started work on October 29, the day after the United Nations’ special session in honour of the King.

“I found the speeches very moving,” he says. “It showed that our King wasn’t just a great King for Thailand but also for the whole world. He was praised for his ideas on sufficiency and sustainability and December 5, his birthday, was designated World Soil Day due to his dedication to soil science and conservation.”

Khemarat, who is 69, is depicting His Majesty between ages 65 and 70, drawing inspiration from a fond childhood memory as well as a lifelong study of the King’s philosophy, speeches and hard work on behalf of the people.

“When I was 10 I went to pay respects to the King when he visited my hometown in Surin. I truly expected him to descend from the sky, like an angel, but he was indeed a human being.

“As I grew older and learned more about his devotion to the kingdom, I understood that we really did have a great king.”

Khemarat’s sculpture will show His Majesty standing on a book entitled “Thailand”, its surface etched with the script of the 13th-century Ramkhamhaeng Stele “to underline the civilisation of the kingdom”.

It was Khemarat who sculpted the bas-relief minted on coins in 1986, the design taken from a famous photo of the King toiling in the countryside, a bead of sweat at the end of his nose.

The artist’s current project dwarfs that memorable image in scale, but history has a place for all sizes and all emotions.

HISTORY IN THE MAKING

- Khemarat Kongsook’s sculpture will be shown – along with 89 paintings of His Majesty done by Silapkorn University alumni – in an outdoor exhibition on the school’s Tha Phra campus on November 26 and 27.

- Visitors will at the same time be able to view Pongpan Chantanmattha’s work in progress, “Phra Bhumibol”.