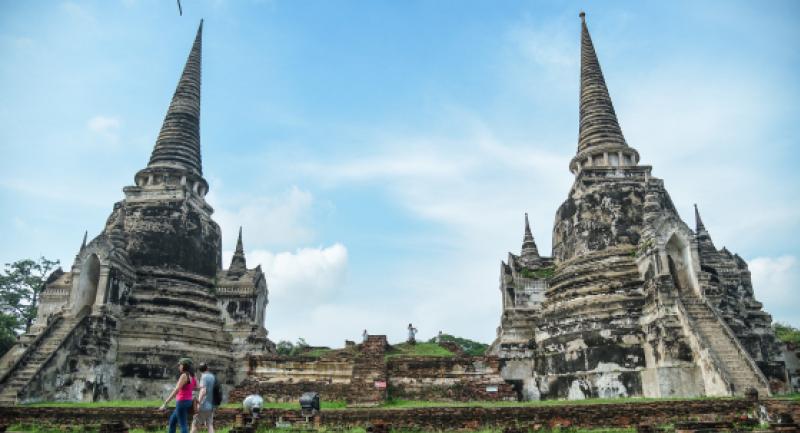 International conservation experts gathered in Ayutthaya recently for a symposium on the conservation of brick monuments. Nation/Chalinee Thirasupa

By Manote Tripathi
Special to the Nation

As conservators fret, a symposium seeks for fresh-solutions to protect the ancient capital’s historical temples Since its heyday as the capital of the Thai kingdom, Ayutthaya has always been vulnerable to the forces of nature. Now as the crown jewel of Thailand’s cultural tourism, and a Unesco world heritage site, Ayutthaya’s brick monuments need constant attention as they face up to the perennial threats of seasonal flooding, rain, humidity and bio-growth.

“The International Symposium on the Conservation of Brick Monuments at World Heritage Sites”, organised by the Fine Arts Department in conjunction with Unesco and the Netherlands Funds-in-Trust for Unesco, brought together a vast array of international experts in archaeology and conservation from Thailand, Cambodia, Vietnam, India, Sri Lanka, France, Germany and the United States. They shared views on how to best conserve the brick monuments of Ayutthaya, drawing upon professional experiences from each of the participating countries.

Since Ayutthaya was designed from the start to cohabit with the tropical climate – the rains and seasonal floodwaters – damage from natural threats is inevitable. The old city’s major temples were partially submerged in the great flood of 2011. Since then levees and floodwalls have been built, resulting in complete protection of the famed temples against seasonal flooding. The temples of Ayutthaya need constant conservation work as a result of the forces of nature. Photos courtesy of the Fine Arts Department

Add to this the ever-present scourge of humidity and soil subsidence during the rainy season and it’s clear why the historical park’s brick monuments are under constant threat.

Ayutthaya’s conservation work dates to 1908 when governor Phraya Boran Ratchathanin Samuhathesa-piban improved the landscape within the ancient palace, resulting in protection against private ownership within the designated area.

In 1991, Unesco’s inscription of Ayutthaya as a World Heritage Site gave rise to the city’s first 10-year conservation master plan. It stipulates that that the standard of archaeological intervention has to rely on the principles and standards of Unesco and the International Scientific Committee on Archaeological Heritage Management (ICAHM).

The current master plan, which contains some revisions, sets out to introduce advanced research data to conservation work, as well as revitalise the historic physical characteristics of the city for modern use. Planned regulations will tackle such unresolved problems such the growing population’s and street vendors’ encroachment on the archaeological sites and lax zoning policy.

Apichat Suwan, a specialist art researcher based at the department’s Conservation of Paintings and Sculptures Division, notes that conservation work in Ayutthaya is mainly about tapping into the Ayutthaya-period traditional construction wisdom as well as modern techniques. For stucco, conservation involves traditional materials with the same or similar characteristics and properties to the original materials used to build monuments. Lime mixed with molasses or animal skin is preferred to cement.

Substitute materials like certified synthetics from scientific methods can be used to replace traditional materials in some processes of conservation.

To restore damaged murals, conservators use certified Paraloid B-72 that acts as glue connecting the foundation and paint layers to the lime plaster. It replaces the tamarind-seed glue, a traditional adhesive material.

However, conservation work has been hampered by two major problems.

“We lack skilled craftsmen and budget. Our contractors tasked with restoring some historical structures usually lack a proper knowledge in traditional construction methods and in restoring brick monuments of Ayutthaya. They tend to use modern construction materials like cements as their solutions,” lamented Pratheep Pengtako, director of the 3rd Regional Office of the Fine Arts Department based in Ayutthaya.

The symposium provided Ayutthaya with some solutions as it exposed local technicians to new and familiar perspectives in conservation.

Dr Ly Vanna, Director of the Department of Conservation of Monuments in the Angkor Park, said the use of traditional materials and techniques ensures the durability of a brick monument’s authenticity.

“New materials and techniques are only allowed in case old materials are no longer usable, and traditional techniques cannot secure the structure,” he said, adding new bricks are great as interlocking pieces.

Dr Christophe Pottier, head of Ecole Francaise d'Extreme-Orient (EFEO) in Siem Reap, agreed, adding that Angkor is facing broadly similar challenges. Some 100,000 tourists visit Angkor each day yet because Siem Reap remains one of the poorest cities, many monuments are vulnerable to seasonal flooding.

“We need to control urban development, improve the city’s irrigation system, and take local communities into consideration,” he said.

Dang Khanh Ngoc, from Vietnam’s Institute of Conservation of Monuments, Ministry of Culture, Sports and Tourism, presented an update on conservation work at the World Heritage Site of My Son. He is of the view that monuments should be preserved as they were found.

“Only partial reconstruction by anastylosis can be initiated using the original materials found on site. The introduction of traditional or new materials different from the original ones (as steel, concrete, cement mortars, etc) should be in principle forbidden to avoid incompatibilities,” said Ngoc. Dr Gurmeet Rai identified types of damage to the walls of Wat Mahathat. Photos courtesy of the Fine Arts Department

Dr Gurmeet Rai, a conservation architect and director of the Cultural Resource Conservation Initiative (CRCI), has directed restoration projects throughout India, including the Moghul Empire’s Serai Lashkari Khan and Qila Patti of Tarn Taran District. She recommended removal of vegetation on archaeological sites using organic products like a mixture of asafoetida and lime putty instead of herbicides.

Experts from Japan and Germany have undertaken restoration work at temples in Ayutthaya in collaboration with the Fine Arts Department. Leisen advises the use of traditional materials for restoring Ayutthaya ruins. Photos courtesy of the Fine Arts Department

Dr Hans Leisen, a professor emeritus at the University of Applied Sciences, Cologne, has led a four-year safeguarding project at Wat Ratchaburana since 2012. The project, to be completed early next year, aims to slow down the temple’s damage process through a systematic procedure: anamnesis, diagnosis, and therapy.

“This approach is necessary as every intervention is also a risk to the preservation of the monument,” he asserted.

Leisen introduced in-depth scientific investigations into the state of the temple, which was greatly damaged by the 2011 flooding, and developed individual conservation concepts for each part of the temple: from stucco to brickwork.

Through scientific analysis, Leisen found that the stucco showed a different weathering behaviour compared to brick or laterite. Besides the material properties (water transport, water storage, water vapour diffusion), external damaging factors like moisture, mechanical stress or load played an important role in development of damage at an individual monument.

Leisen tried different traditional materials for mortar such as a mixture of lime and river sand, and a mixture of lime, sand and molasses. He found the latter recipe resulted in the surface darkening over time.

Masahiko Tomoda from the Tokyo National Research Institute for Cultural Properties, found that salt weathering at Wat Mahathat occurred as a result of water evaporation from the surface and subsequent salt crystallisation. During the restoration process, he experimented with the use of hydrophobic resin to prevent water penetration into the surface. The method ensured durability of the treated brickwork but resulted in darkening of the surface over time.

“Bring back the protective city walls. Then construct a drainage system within the walls. Plant bamboos, which grow quickly, or other trees at places where water is expected to flow. Pratheep was full of praise for the symposium, saying that such meetings provide instructive forums for exchanges of views.

“There’s no one-size-fits-all solution to any conservation work. I like the fact that foreign experts were on hand to give advice and new ideas. Whatever techniques are introduced; they need to be adjusted to the local context. Our concept is that Ayutthaya has to co-exist with communities, people and water,” he said.

For the updated symposium documents, visit