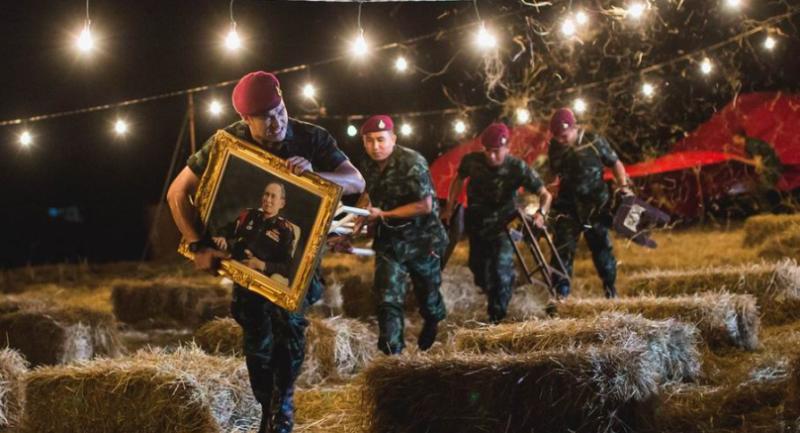 Colonel Nueng protects a portrait of His Majesty the King after a tent collapses in a rainstorm.

A new docudrama based on the "Power of Human Energy" projects shows how the late Monarch's sufficiency philosophy is bringing salvation to drought and flooding stricken areas.

AS THE nation continues to mourn the passing of His Majesty the King Bhumibol Adulyadej while celebrating the accession to the throne of his son, King Rama X, a new docudrama comes to the small screen that pays tribute to the development works of the late Monarch. Titled “Tam Roy Phra Raja Jak Phupha Soo Maha Nathee” (“Follow in the King’s Footsteps from the Mountain to the Sea”), it is the third in a series of TV programmes adapted from the “Power of Human Energy: A Journey Inspired by the King” project, which itself is inspired by the sufficiency economy philosophy of the late King.

“TV drama is probably the most influential medium these days and the best way to motivate Thais people to follow in His Majesty’s footsteps,” says Thissana Duendao, managing director of Mind & Matters.

The “Power of Human Energy: A Journey Inspired by the King” project was initiated in 2013 by Chevron Thailand’s Exploration and Production division in collaboration with the Agri-Nature Foundation, after the Pa Sak Jolasid Dam overflowed in 2011 leading of some of the worst flooding the country had known.

“His Majesty the King was very concerned about the water resource management of the Pa Sak River Basin and said, ‘I could help more if I could leave hospital’. He was being treated at Siriraj Hospital at the time but we took his words to heart and two years later, the ‘Power of Human Energy’ project became a reality,” Thissana explains.

“It is based on His Majesty’s sufficiency economy philosophy, local wisdom and the social landscape. Our aim is to show the successes achieved by Thais who have followed in the King’s footsteps and over the four years of the project, we have captured a lot of footage.” Two docudramas, “Yen Sira Nam Phra Thai” (“The Will of The King”) and “Paendin Nee Mee Rak” (“This Country Has Love”), have been produced to date, each on a different concept, and have received a warm welcome from small screen viewers. “Tam Roy Phra Raja Jak Phupha Soo Maha Nathee” (“Follow in the King’s Footsteps from the Mountain to the Sea”), which shows on Monday, is also expected to get a warm reception.

“The first focused on a teenager who was forced to take part in the project but ran away because he wasn’t interested. The adolescent later came to realise he had made a mistake and tried to make amends by becoming a volunteer. The second series showed the constant war of words between an actor and actress and was based on His Majesty’s 2004 New Year card, which conveyed the message ‘unity is power to support Thailand’,” Thissana explains. The “Power of Human Energy” project gained more support after Prime Minister Prayut Chan-o-cha, who was the Army’s commander-in-chief at that time, watched the docudramas and sent 500 soldiers to Mab Euang Agricultural Nature Centre in Chon Buri to learn His Majesty’s philosophy and bring the lessons back to the Special Warfare Command in Huay Kratak, Lop Buri.

“After attending the centre, the SWCOM changed the shape of the local kaem ling (monkey cheeks) reservoir from a square to a more natural form. This made it much more useful as a fish habitat and allowed for more spawning. The Kaem Ling Reservoir, which is the centrepiece of the 600-rai learning centre, the biggest in Thailand, is expected to become a new tourist attraction in Lop Buri,” Thissana says.

Each of the docudramas has been praised for its presentation and timely storytelling and “From the Mountain to the Sea” is very much in tune with this era of start-ups. It centres on Nara (played by Thai-Hong Kong actress Alice Tsoi), a 26-year-old working woman who lives in the city. The holder of an MBA, she is cheerful and alert, qualities that her father knows will land her a secure, life-long job with a big company. Nara, though, has other ideas, preferring to change her father’s abandoned land into an organic farm. Her father disapproves and refuses to lend his support but Nara isn’t put off. She eagerly accepts the help offered by Nueng (Natchara Nuntaphodej), a 30-year-old military officer who is in charge of the 600-rai Erawan Project. Nueng’s character is based on Col Roengrit Chaloeyreek, chief of the Special Warfare Command’s service division and the docudrama is directed by Somkiat Vituranich of “October Sonata” fame.

“This year’s episode clearly shows how adopting His Majesty’s knowledge can be a live-saver in today’s uncertain times. For example, we know of a middle-aged woman who was shunned by her neighbours over money issues. That all changed after she participated in the ‘Power of Human Energy’ project. She spent a full year developing her organic farm and now has enough money to live comfortably. Most importantly, she has also won the respect of her neighbours for her perseverance.” Thissana says.

“Local villagers used part of this state property land, which is under the responsibility of Special Warfare Command, to earn a living and it was later used to solve the problems related to the 2011 flooding. Lop Buri province supported the budget for the monkey cheeks project and SWCOM wrote the Erawan project to develop the land into a learning centre. Once we had completed the monkey cheeks phase of the project, we focused on developing the area into nine learning camps,” says Col Roengrit.

“We looked at successful water catchment models in several provinces and adapted them into the Pa Sak model for our land. We use both the khok nong na (swale) and the loom khanom khrok (catchment) models, which have proved successful in solving water problems both in times of drought and flooding and we now have the biggest loom khanom khrok in the country with s capacity of 1.5 million cubic metres.”

The Erawan Project is divided into three 200-rai zones. Zone A is a home to the monkey cheeks reservoir and is set aside for tourism and sport. Zone B is a learning centre based on sufficiency economy philosophy and zone C is devoted to agriculture.

This new docudrama will later be released in DVD format.

TUNE IN AND LEARN

- “Tam Roy Phra Raja Jak Phupha Soo Maha Nathee” (“Follow in the King’s Footsteps from the Mountain to the Sea”) will be broadcast on Monday on Channel 5 at 9.09am, and again on Amarin TV Channel 34 at 1pm.