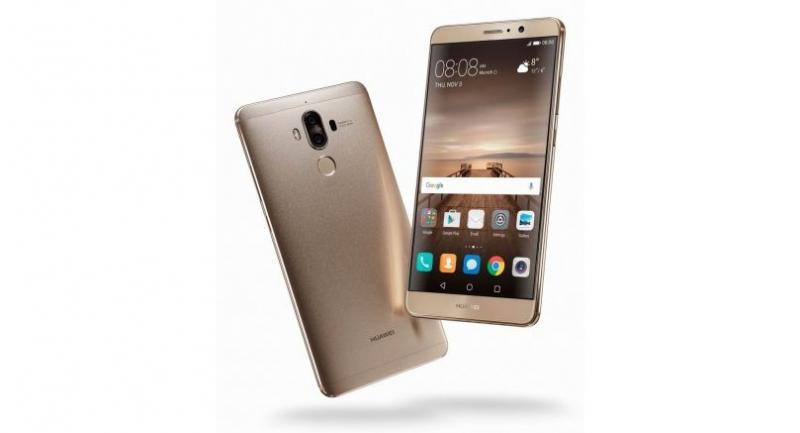 By Paisal Chuenprasaeng
THE NATION

SLEEK AND ELEGANT, the Huawei Mate 9 is a new flagship smartphone from the Chinese manufacturer with good performance and impressive cameras. Mate 9 uses the same dual-lens set-up as the Huawei P9 and P9 Plus and the camera system has been co-designed with Leica to capture impressive snapshots.

At just 7.9mm thin, the Mate 9’s metal unibody is compact yet still manages a 5.9-inch Full HD display surrounded by a frame of just 78.9x156.9mm. Adding to its elegance, Mate 9 features polished sides with a brushed finish.

The Mate 9 is available in five colour options – Space Grey, Moonlight Silver, Champagne Gold, Mocha Brown and Ceramic White. I got to try the Champagne Gold one and it earned plenty of compliments.

The phone is powered by a fast octa-core processor and is equipped with fast working memory and fast internal storage. Huawei uses its Kirin 960 processor in the Mate 9. The processor is made of four A73 cores running at 2.4GHz and four A53 cores running at 1.8 GHz. Mate 9 also uses Mali-G71 octa-core GPU to deliver fast graphics performance. It uses 4 GB of DDR4 RAM that increases its bandwidth by 40 per cent and for storage, it uses 64 GB of UFS 2.1 flash memory whose data transfer rate is 100-per-cent faster than eMMC 5.1 memory.

Huawei says its Mate 9 automatically manages resources by prioritising CPU, RAM and ROM for optimal performance and it also warns you to close memory intensive apps that run in the background so that the smartphone will always have good performance.

Mate 9 has very fast LTE 4G connection. I tested it on TrueMove H’s LTE network and was impressed by the connection speed. For example, a 72-megabyte app was downloaded in a snap. Snapshots were backed up to my Google Photos cloud storage in no time. In fact, they were backed up so fast that my colleagues didn’t have time to delete the photos they didn’t like!

I used Ookla speedtest app to measure the speed and Mate 9 achieved the download speed of 109.54 Mbps and upload speed of 32.15 Mbps.

Mate 9 has excellent cameras. Both main and front cameras captured excellent quality shots during the test.

The main camera uses dual-lens set-up and it is co-developed with Leica. And the camera app is intuitive to use. You simply swipe the viewfinder screen to the right side to display the list of shooting modes or swipe left to access camera settings.

Buttons for selecting filters and colour modes as well as flash modes can be found on the top of the screen.

There is also an Ultra snapshot mode that allows you to shoot a snapshot even when the phones’ screen is off. You simply point the camera at a desired object and double-press volume-down key and the camera will automatically take a photo. And when using the main camera, you can use the volume button as the shutter.

Mate 9 features a second-generation Leica Dual Camera with a 12 MP RGB sensor and 20 MP monochrome sensor. The RGB sensor captures vivid colours while the monochrome sensor picks out the finer details and composition information from the two sensors to ensure a high-quality image.

Information from the two sensors allows the main camera to have a 20-million-pixel resolution or 5,120x3,840 (4:3) pixels. You have options to shoot in lower resolution of 12M, 9M, 8M and 6M resolutions. For video filming, Mate 9’s main camera is capable of recording 4K clips in H.256 video compression standard that allows the file size to be compressed by up to 50 per cent.

During the test in The Nation’s newsroom, we were impressed with this bokeh effect. Our subjects’ faces stood out beautifully from the blurred background. But the fun did not stop there. You can later use the Gallery to adjust the focal point in each of all photos that were captured in the wide aperture mode.

There is also a Beauty mode that our female colleagues were happy about. The mode brightens up the faces of the subjects and gives them smoother-looking skin.

Mate 9 also captures beautiful lights in the Night shot mode. In this mode, you can also manually adjust the ISO and shutter speed values to achieve your desired results. You need to hold the phone steady and if possible, you should use a tripod. When you press the shutter button, the main camera will automatically take several images and merge them into one photo.

I tested the main camera at Centra by Centara Maris Resort Jomtien and captured beautiful night shots of the hotel including the restaurant lit by a decorative pool.

Mate 9’s main camera also comes with Light Painting mode that enables you to take stunning shots of light trails. There are four shooting options from which to choose – Tail light trails, Light graffiti, Silky water, and Star track. Since the mode uses longer exposures, you need a tripod or at least place your phone on a stable surface.

Mate 9’s 8MPselfie camera also takes beautiful shots with its autofocus function. You can set it to auto-shoot yourself by smiling. You can also shoot yourself by touching the fingerprint sensor located on the back cover below the lens. The selfie camera automatically applies a facial enhancement algorithm to make you look good.

Fingerprint recognition is one of several safety features that come with Mate 9. Others include a function to encrypt your microSD card, VPNs, App Lock, Harassment filter, and creation of a secure storage space.

Mate 9 has a good battery life. It comes with 4,000 mAh battery and smart power-saving technology. I could comfortably survive a day with a lot of usage, including photo taking, after one full charge. Huawei says a full change can provide up to 20 hours of video playback or 105 hours of music playback or 20 hours of 4G browsing.

It also comes with Huawei SuperCharge technology that is 50 per cent faster than Mate 8. The technology allows 20-minutes charge for one-day use.

Another feature that I love about Mate 9 is that it can play High-Resolution Audio music files with good quality. I tested this feature with Sony’s MDR-1ABT headphones and I found that Mate 9 played Hi-Res Audio format of FLAC 24bit/192kHz files with good details and powerful bass.

The phone’s stereo speakers also sound good and loud. In the portrait mode, the earpiece speaker plays highs while the bottom speakers boost mids and lows. The stereo environment is however much better in landscape mode. Mate 9 runs on Android 7.0 with Huawei’s EMUI 5.0 beautiful and smart user interface.

And it’s not even ridiculously expensive. Huawei Mate 9 has a suggested retail price of Bt23,900.