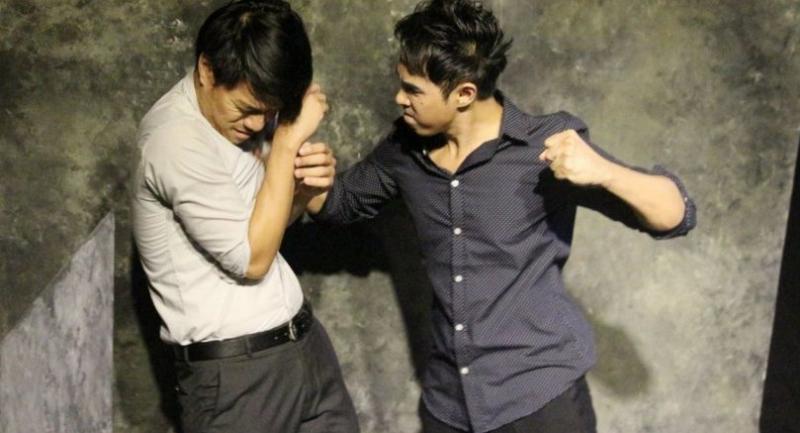 Fists fly after Satha discovers that Wichit had an affair with his wife Nam. Photo/Monkey Army Theatre

By Stage Review
Pawit Mahasarinand
Special to The Nation

The 2017 stage season started very early, only a few days after the New Year holidays in fact, with Monkey Army Theatre’s “The Chanchila: Phop Na Yang Ma Mai Theung” opening on January 6 at Syrup The Space, a new intimate theatre studio and cosy caf้ that’s been converted from a commercial unit in a rundown plaza on Sukhumvit 55.

While contemporary Thai theatre has recently been known internationally for movementbased and political works, we should never forget that an indication of the vibrancy of theatre also depends on the quality of playwriting. And in this regard, the new play by Sornchai Chatwiriyachai is a positive sign for the future.

In this compelling twohour, intermissionless drama, the main character Wichit is killed in an accident and finds himself in a state of limbo. However, the Almighty can’t decide where to send him next due to doubts whether his sins during his life were actually based on his decisions. So an angel in training accompanies him back to reexamine important moments in his life and make his case clearer for the final judgment.

While the setup is familiar – we’ve seen many films with this setting – the content is not. It reminds us that in this democratic country, we don’t actually get to make a lot of decisions and when we do, our decisions may later be deemed invalid by those who are more powerful than us. We don’t need to get too political, as in the case of Wichit, for whom such decisions as what to study at university and whom to marry were not totally made by him. Thais can easily empathise with this character and his problems.

That said, I don’t think that the fact that Satha, Wichit’s university friend whose wife Nam had an affair with him, worked for a mining company whose business was affecting local residents in a rural area was a valid reason to organise a postshow talk on this environmental issue with people who’re suffering from this problem. After all, it’s not even a subplot of this play. Besides, Wichit’s extramarital affair – and it’s again debatable if this was his decision or if she led him into it – is quite predictable and makes the play seem like a TV drama.

Seasoned actor and acting coach Chaiphai Pitisuktrakun is compelling in the lead role. He doesn’t try to do too much but achieves a lot. And that’s notwithstanding the fact that he, rarely in such an important role, occasionally looks and sounds like a reluctant hero who doesn’t really want to carry the whole play on his shoulder. His acting style is quite different from that of Naphat Kietkawankun who’s more comfortable as Legaro and frequently steals the limelight from Wichit. The rest of the acting ensemble has nine members, plus three guest actors who takes turn performing a university professor. I cannot remember watching a production this small with such a large number of actors: this number could have easily been cut in half had the director simply asked them to do double roles—and most of their previous credits prove they can.

Watch it this weekend

“The Chanchila” continues at Syrup The Space, in Liberty Plaza, Soi Thong Lor (right on Saen Saep canal) from Friday to Sunday at 7.30pm, with 2.30pm matinees on Saturday and Sunday. It’s In Thai with English surtitles.