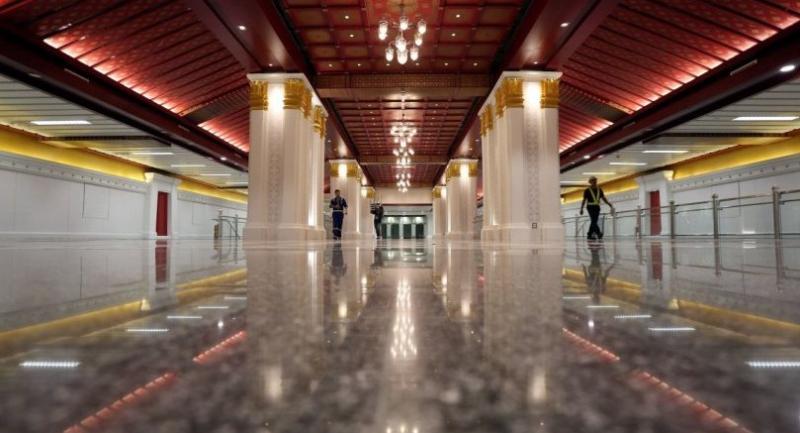 The Sanam Chai subway station is decorated with elements of Thai traditional art to relate to the elaborate structures of neighbouring sites including the Grand Palace and Wat Pho.

WITH AN ELABORATE interior borrowed from traditional Thai arts, the Sanam Chai subway station promises to be Bangkok’s most elegant when MRT’s Blue Line extension goes into operation probably in 2019.

The first station located in Bangkok’s old inner zone, it is within easy walking distance of such significant cultural attractions as the Grand Palace, Wat Phra Kaew and Wat Pho and its design offers an advance taste of the spectacular architecture found outside. When commuters ascend from the platform to the concourse area, they’ll be immersed in decorative elements mostly found in the temples and palaces. The solid pillars along the walkway are decorated with lotus blossom-shaped mouldings and tiles with the decorative pattern of prajam yam, the red brown ceiling is painted in an intricate pattern of dao lom duen (moon surrounded by stars) while the walls mimic the ancient wall of the Grand Palace. The ceiling is red brown, a shade normally found in the temples and palaces, and painted with the intricate dao lom duen pattern.

Designed by noted architect and National Artist Pinyo Suwankiri, the station is now fully complete, though no trains will be running through it for at least another two years.

“This station is much more than just a passenger terminal. I’ve applied traditional Thai art elements to communicate the value of our arts. To give the solid and massive pillars a graceful and lighter appearance, the top is decorated with one-tier, lotus-shaped mouldings in gold while the recesses at the base are a multi-faceted structure that adds dynamism to the design,” says Pinyo. The station’s solid and massive pillars are enhanced with a tier of lotusshaped mouldings and tiles with a floral pattern to add grace and light.

As the station will be the stepping off point for the Grand Palace, the walls are designed to resemble those used in ancient constructions though without bai sema (the boundary stone designating the sacred area). The area above the walls is painted in gold, taking its cue from the grandeur of the shining gold-plated architecture inside the Grand Palace.

The red doors in the white walls are inspired by the gates in the walls of the Grand Palace though these open to reveal inspection panels. The wall takes its cues from the ancient wall of the Grand Palace.

“The design aims to evoke the ambience of the neighbouring area while blending a modern transport mode with the unique Thai way of life. It promises to be a tourist destination in itself,” adds Pinyo.

The station is part of the 27km MRT Blue Line extension being built from Bang Sue to Tha Phra and from Hua Lamphong to Bang Khae under the operation of the Mass Rapid Transit Authority of Thailand (MRTA). Ch Karnchang is one of the five contractors assigned by the MRTA to build the Sanam Chai station, which links to Isarapap station on the Thon Buri side through a 200-metre-long rail tunnel under the Chao Phraya River. A rail tunnel under the Chao Phraya River will connect Sanam Chai to Isarapap station on the Thon Buri side.

The Sanam Chai station is 32 metres below ground level and as it’s located in the city’s ancient cultural area, Ch Karnchang has worked closely with the Fine Arts Department throughout the construction. The digging yielded the foundations of an ancient site as well as numerous artefacts like coins, ceramic bowls and terra-cotta sculptures.

These artefacts are now under care of the Fine Arts Department and will eventually be showcased both at the station and at the Museum Siam right next door to the station’s entrance. Digging the foundations for the new subway station led to the discovery of an ancient site and many artefacts including coins, ceramic bowls and terracotta sculptures.

“The station is 23-metres wide and 270-metre long and before construction, we had to set up five excavation zones along the route by digging a total of 138 holes – each 1-by-1-metre wide, and 2-by-2-metre deep. We recorded all the artefacts found and handed these over to the Fine Arts Department,” says Kittikorn Tanpao, director of the MRTA engineering and architecture department. Sanam Chai is not the only MRT station mirroring the traditions of bygone days. Wat Mangkon Kamalawat station, which is close to Chinatown in Yaowarat, draws on the area’s rich Chinese heritage while Isarapap station will be decorated with swan motifs in a nod to nearby Wat Hong Rattanaram, whose name means swan.

Sanam Chai sits in front of the main entrance of Museum Siam, which is already considered the gateway for visitors to explore the historical sites in the old town area. The neo-classic style building, once home to the Office of the Permanent Secretary for the Ministry of Commerce, is undergoing renovations in preparation for the new permanent exhibition “Decode Thainess”, which is expected to open late this year. Sanam Chai station is in front of the main entrance of Museum Siam, the gateway for visitors to explore the historical sites in the old town.

“We aim to be the first-stop destination in alerting visitors to the history of our nation and the significant sites nearby, giving them a wider perspective through our creative learning exhibitions and events. We’re well aware of the history, culture and traditions of our surroundings. Learning about the past allows us to better understand our present,” says museum director Rames Promyen.

The museum is part of the Tha Tien community, one of Bangkok’s oldest. In the latter part of the Ayutthaya Period, Tha Tien was both militarily strategic and a port for foreign ships entering Siam. When the capital was moved to Thon Buri, it became a trading centre for agricultural produce, and that aspect blossomed when King Rama I had the Grand Palace rebuilt on the eastern bank where it still stands. The station is fully completed though the trains won’t start running for another two years.

Some 30 million tourists visited Thailand last year and the easy access to the Rattanakosin Island offered by Sanam Chai station when it opens will certainly attract more visitors to the area.

“The museum is the centre for cultural and learning-based tourism of Rattanakosin Island, and provides information and guides to the attractive sites including Wat Pho,” Rames adds.

Wat Pho is famously renowned as the country’s first public university, becoming a seat of learning at the insistence of King Rama III when he ordered its restoration. Among the “lost sciences” whose principles are inscribed in stone for the public’s edification, was the art of massage.

It was Rama I who amassed a collection of traditional pharmacopoeia and commissioned statues of hermit monks contorted in various healthy exercises.