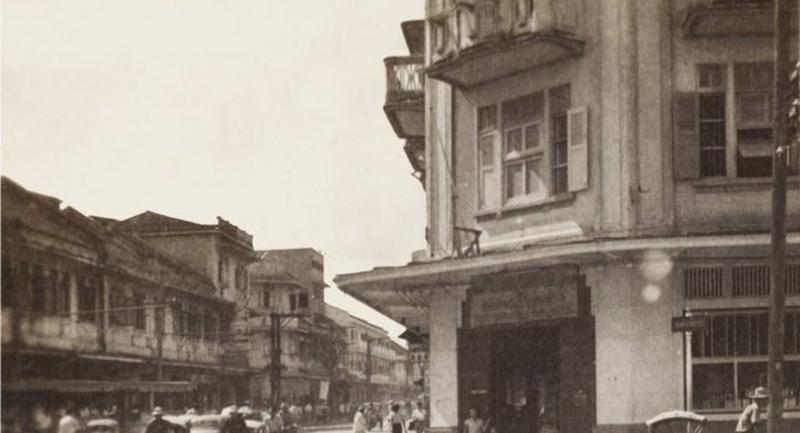 An old photograph shows the building

STANDING amidst the construction chaos of Bangkok’s Chinatown where developers are cashing in on the extension of the new underground mass transit system, the yellow four-storey European-style building on the corner of Sua Pa and Charoen Krung Road has a proud, erect bearing that conjures up images of an elegant past.

Just 200 metres from revered Chinese temple Wat Leng Noei Yi, the century-old building that’s home to the Berlin Pharmaceutical Museum has undergone refurbishment to better narrate the history of Chinese immigration, the development of Western medicine and the drug-making business.

In 1932, long before the area became known as the best place to buy the accoutrements for Chinese-style worship and mobile phone accessories, Tsai Yen-Kiang, later Dr Chai Chainuvati, set up the Berlin Dispensary, one of the first private clinics offering Western medicine in the Chinatown neighbourhood during the reign of King Rama VII.

Known as Dr Berlin among his patients, Dr Chai gradually expanded into the drug-making business and by 1954 was producing his own medicines. Today the company, which is now called Berlin Pharmaceutical Industry, is one of the five largest medical manufacturers of treatments for cardiovascular and gastro-intestinal diseases. A century-old Europeanstyle building at the corner of Sua Pa intersection has been refurbished and turned into the Berlin Pharmaceutical Museum to tell the history of Chinese immigration, the development of Western medicine and the drugmaking business. An old photograph shows the building’s exterior in 1932 when Dr Chai set up his private clinic.

Although the entire production process relocated to a new factory on Rom Klao Road in suburban Bangkok in 1988, the clinic’s second to the fourth floors are still used as the firm’s offices. Prof Termchai Chainuvati, Dr Chai’s son, decided to transform the entire first floor into a museum in memory of his late father and opened it to the public late last year.

“My purpose in opening the museum is not only to honour my father who passed away in 1978 at the age of 75, but also to bring another cultural attraction to the Chinatown neighbourhood. It’s not a place to promote a particular business but relates the country’s development of medical services. It will also tell the young generation how a young Chinese guy whose parents migrated to Siam was able to build himself up through sheer hard work and make his own medicines widely accepted,” says gastroenterologist Termchai, 77.

Gridthiya Gaweewong and Somsuda Piamsumrit from the Jim Thompson Art Centre are serving as the curatorial consultants to make Termchai’s dream come true. The museum is arranged in chronological order starting with a profile of Dr Chai, whose father, Tongyong Sae Chua, migrated from Guangzhou to Siam in the reign of King Rama VI and settled in Sri Maha Pho district of the Eastern province of Prachin Buri.

“A museum can be either object-based or story-based. In this case, we don’t have a lot of historical stuff to narrate the interesting story. We’ve created a mock-up of Dr Chai’s office that is as close to the real one as possible using photographs and the data gathered from his family members and people who used to work with him,” says Somsuda. Visitors to the museum are greeted by an old wooden sign bearing the name of the Berlin Dispensary, old photographs of Dr Chai and his family members, and a glass cabinet showcasing some old documents.

Visitors to the museum are greeted by an old wooden sign bearing the name of the Berlin Dispensary in Thai, English and Chinese that has hung at the entrance to Dr Chai’s clinic since its early days. Next to it is an old photograph of the building’s exterior that also shows a tram, tricycles and bicycles making their way along Charoen Krung Road.

The building has its own history too. Constructed during the reign of King Rama IV, it was considered an architectural gem. Spread over five blocks, Dr Chai rented the building from the property bureau of Queen Rambhai Barni – the Queen Consort of King Rama VII – until he was able to take over ownership. A glass cabinet showcases some old documents including a 1969 letter from the property bureau demanding the rental fee, Dr Chai’s travel document issued by the Chinese Embassy Bangkok and his name card bearing his previous name Tsai Yen-Kiang. Despite the family’s meagre income, Chai was sent at a young age to stay with his relatives in Shanghai for further education. Intelligent and hard-working, he won a scholarship to study at Tongii German Medical School – now Tongii University – founded by German physicians in Shanghai. All courses were taught by German professors and he completed his degree with the highest honour in 1932.

“While living in China, he said he had no rice to eat and had to dig up potatoes as satisfy his hunger,” Termchai says.

“My father taught us to study and work hard and be thrifty with money. Trained by German professors, he was disciplined and taught his children to be the same. He never ate out to save money and the dining table became our classroom,” adds Termchai, who has his own clinic on Bangkok’s Phetchaburi Road. Chai’s professor was so impressed by his young student that he proposed a teaching job at the medical school. Chai turned down the offer, determined to return home to open his own clinic. The professor then asked him for one favour – that Chai name his practice in his homeland as a tribute to Germany. And so the clinic was became the Berlin Dispensary.

“My father was known for his devoted care to patients and often treated them free of charge. In some cases, he even paid the bus fare for his poor patients to return home,” says Termchai who is also the chairman of the Liver Foundation.

The mock-up of his office features his working desk and examination table, both recreated from photographs and the memories of his disciples. Hanging on a wall is an old photo of Dr Chai at work. A glass cabinet displays his hand-written notebooks, medical dossiers, German textbooks and medical equipment. A mock-up of Dr Chai’s office features an old photo of him at work, his desk and examination table, both recreated from photographs and the memories of his disciples.

At that time, Dr Chai used the second floor of his clinic for the diagnosis and treatment of his patients and the first for the dispensary. The dispensary counter has also been reproduced and boasts a display of old-fashioned medicine bottles and old prescriptions.

“Most of the medicines at that time were taken in liquid form. There were no capsules. My father would prescribe the formula and grind the medicine with a mortar and pestle, then put the single doses into paper twists that the patients would mix with water at home. We’re in the process of making a video to illustrate how the medicine was made, packaged and dispensed in the old days,” Termchai says. The dispensing medicine counter has also been rebuilt and boasts a display of bottles containing the ingredients for medicine and old prescriptions.

In 1954, Dr Chai started his own drug-making business, using the second floor of the building for administration. The third floor was converted into the production area for the compounded medicines while the fourth floor was set aside for storage. A replica of the hoist used to lift the ingredients from the first to the production unit upstairs has been installed to better narrate the history. A replica of the hoist used to lift the medicine ingredients from the first floor to the production unit upstairs when Dr Chai started his drugmaking business.

Among the medicines first manufactured here were Berlin balm, Neo-Tonin, a purple liquid medicine to enhance appetite, the cough syrup Houstonin and Begesic cream for muscle and joint pain relief. Some of the liquid medicines are also on display at the museum.

In contrast to the company’s computer-programmed pharmaceutical manufacturing machines today that can produce about 6,000 tablets per minute, the museum displays the first tablet press machine Chai acquired from Germany in 1969. It’s a single punch machine and with a production capacity of 200 tablets per minute, was considered very fast for its time. Also on display at the museum is the first tablet press machine Dr Chai acquired from Germany in 1969.

“I’m working with the curatorial consultants on how we can reproduce the ambience of medicine manufacturing when we were just a small family-run firm,” says Termchai, adding that the company is now under the direction of his daughter.

Adjacent to the exit is a small cafe for visitors to indulge in a cup of good coffee. A drug store will soon open in the same compound.

The Berlin Pharmaceutical Museum is right at the corner of Sua Pa intersection on Bangkok’s Charoen Krung Road. It’s open daily, except Tuesday, from 9am to 5pm.

Admission is free for now but from next month onwards, visitors will have to pay Bt40. Bt20 of the fee can be redeemed for a drink or a medicine when the drug store opens.