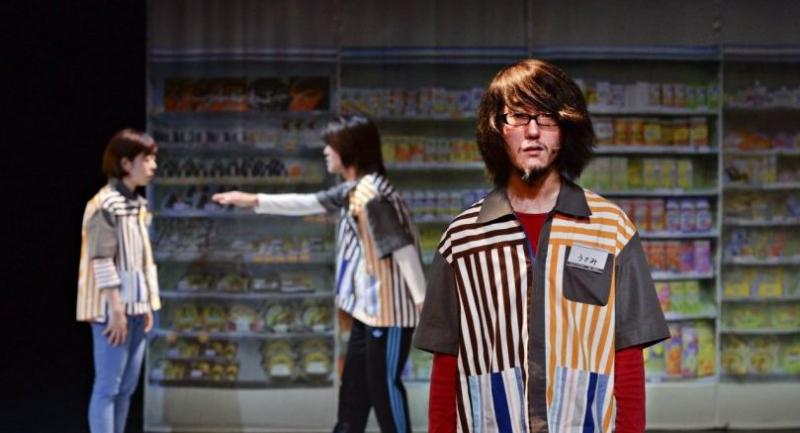 Okada returns Bangkok this weekend for staging his new production

Back in 2010,  the Japan Foundation Bangkok introduced Thai theatre lovers to playwright and director Toshiki Okada whose chelfitsch Theatre Company – the name comes from children’s pronunciation of the word “selfish” – staged his acclaimed play “Five Days in March” at Patravadi Theatre’s Studio 1. Audiences were astounded not only by the actors’ speed of delivery of their dialogues but also intrigued by the unique physical movements accompanying their words. The play brought Okada Japan’s top theatre award and when he adapted it into a short novel, he was honoured with another prize. The Thai translation is now available in bookstores. In fact, the dialogue is so colloquial that Japanese scholars and critics refer to it as “super-real” Japanese. Likewise, the body language is so dance-like that it clearly underlines Okada’s passion for working with dancers and choreographers.

In an interview with Japan Foundation’s Performing Arts Network Japan website, Okada says he was inspired by director and playwright Hideki Noda’s language while he was still a business student at Keio University in early 1990s. Thai audiences might remember seeing Noda’s “Red Demon” later that decade as well as Nikorn Sae Tang’s Thai production of his “Girl of the Soil” 11 years further down the road.

“Some people might say I should try to write scripts that are more articulate,” Okada adds. “But if I did that, part of what is important to me would be lost. I reproduce the real, inarticulate way that the average person actually speaks, because one of the things I want to express is what lies within that ineptness, the larger content.

“Some people might say that since we are living in such an inarticulate world, we should at least try to use articulate Japanese in our theatre. But I think this attitude is limiting. To me, the Japanese that people actually use is even richer and more positive than the formal language.”

Okada will further explain this in his talk, in Japanese with Thai and English translation, this Wednesday afternoon.

And as for his actors’ physical movements, he says, “This goes back to the influence I received from Hirata, about diverting the consciousness of the lines by shifting consciousness to the body. In this respect I’ve continued to follow Hirata’s example. But, just as focusing too much attention of the words kills them, shifting too much attention to the body movement also kills the body presence.

“There must be something within the human being that precedes the script or the bodily expression. When you say something or make a gesture, there must be some underlying reason. That’s where I want to take the consciousness. That’s what I’m now encouraging the actors to develop within themselves in the studio when we practise and rehearse,” he explains.

“I’m always telling the actors that the body and the words are not connected or integrated. In reality, it’s extremely rare for body movements to complement or reinforce the words we are speaking, and most of the time our movements are completely unrelated to our speech. The nature of the body is very rich. And in that sense, I think that our natural, real body movements are richer than those of actors on the stage. That’s why I want to get closer to the richness of the actual body by creating plays that are modelled on reality.” Actors who are wondering how this actually works can join Okada’s workshops this Saturday and Sunday afternoon.

From Friday to Sunday, thanks to Japan Foundation Bangkok who’s celebrating the 160th anniversary of Thailand and Japan’s diplomatic relations, we’ll get to watch another work by Okada. More comical and with a more familiar setting of a chain convenience store, it has the delicious title “Super Premium Soft Double Vanilla Rich”.

Set to the accompaniment of all 48 preludes and fugues that make up JS Bach’s “The Well-Tempered Clavier” transmuted into cheap background music piped into the store, the play’s social criticism promises to be biting and merciless.

Thanks to our familiarity with the setting, laughs are also guaranteed. For example in one scene, the new part-timer complains that the barcode reader sometimes doesn’t beep with the “read” signal no matter how many times she puts it to the code, even though she is sure that she is flashing it on the code correctly. The manager comes and explains that the ice cream product the customer is trying to buy, namely “Super Soft Vanilla” is one that the head office has decided to stop carrying and has been taken of the barcode list. Deeply disappointed, the customer says, “But I loved this flavour so much!”

Asked why he chose this for Bangkok audiences, Okada tells XP, “Because I’d like to question Thai people about consumerism”. He adds that he regards Japanese convenience stores as “contemporary temples in contemporary Japanese society” and that there they’re “in the state of heat death” while their Thai counterparts “seem much more chaotic.”

Premiered in 2014 at Theater der Welt festival in Mannheim, the play has since been performed at several international events including London International Festival of Theatre (LIFT) and Festival d’Automne de Paris, though nowhere in Asia except Japan.

Okada notes that despite convenience stores in Europe being very different from those in Asia, “I could see that the audience enjoyed this play. We shared thoughts on such topics as consumerism, later capitalism and so on if they were not familiar with [our style of] convenience stores.”

His works are now being seen more often outside Asia – for example, last month he premiered a new work at Munchner Kammerspiele in Munich and staged another play at Asia TOPA festival in Melbourne.

“I’m not sure why but I would guess that in general theatre is much more popular in Europe than Asia,” he says.

For audience members who’re afraid they might miss his actors’ physical movements while focusing on the surtitle screen above the stage, he says, “My suggestion is that you don’t stick to surtitles. You can use surtitles like sticks while skiing: you don't always have to lean on them.”

- It’s in Japanese with Thai and English surtitles.

- Okada’s talk, in Japanese with Thai and English translation, is on Wednesday at 4 in Room 303, Maha Chakri Sirindhorn Building, Faculty of Arts, Chulalongkorn University. Free admission.

His workshop, in Japanese with Thai translation, is on Saturday and Sunday, 4 to 6pm, on the sixth floor of the same building. Pre-register at [email protected]