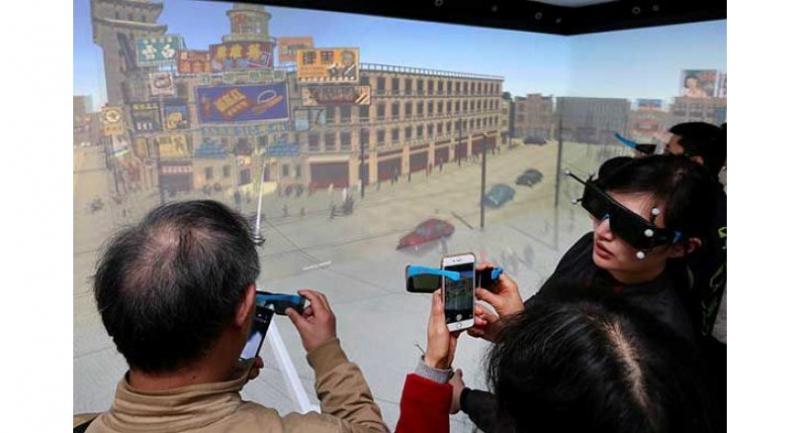 People use the augmented reality feature at the Shanghai Dashijie. Also known as the

How the modern world is preserving old culture

The virtual reconstruction of Beijing’s city gates is not the first attempt to preserve cultural heritage through the use of digital technology. In fact, augmented reality, along with other tools such as virtual reality, three-dimensional printing and drones, has already brought new possibilities for the conservation and preservation of cultural heritage across the globe.

With the help of interactive computer technology, VR replicates and simulates a 3-D immersive environment, while augmented reality supplements our view of reality via such computer-generated sensory input as sound, video, graphics or GPS data.

“The use of VR and augmented reality in the preservation of cultural heritage, such as digital preservation and virtual restoration, is not only beneficial to the conservation of relics but it also increases their public exposure,” says Zhou Mingquan, director of the Virtual Reality Applied Engineering Research Centre at the Ministry of Education.

The world is witnessing unprecedented development of the virtual and augmented reality industry. Global revenues generated by the combined market are forecast to reach almost $14 billion (Bt483 billion) this year, a rise of 130.5 per cent from last year, according to a report published by the International Data Corporation.

Digi-Capital, an industry observer and adviser, predicts that total augmented reality market revenues will reach $90 billion by 2020, surpassing VR, which is predicted to reach $30 billion.

Major Chinese internet companies - Tencent Holdings Ltd, Alibaba Group, Baidu Inc and LeTV - have all integrated the technologies into their strategies and product lines, investing heavily in their development in entertainment, education and journalism, among other areas.

The recent progress of new technology is a blessing for the preservation of cultural artefacts and landmarks.

As one of the fastest-growing markets for these new technologies, China is seeing them increasingly used in the preservation of cultural heritage and, as a result, that cultural heritage is finding its way into people’s everyday lives.

When the Shanghai Dashijie, also known as the “Big World”, the city’s most popular theatre since 1917, reopened last week, it featured an interactive VR room that recreates scenes of old Shanghai, according to Jiefang Daily.

Moreover, the city’s traditional Shikumen neighbourhood has been digitally documented by VR cameras and software in an effort to preserve endangered architecture.

Last year, the cultural heritage of Yunnan province in Southwest China – including festivals featuring murals by members of the Yi, Dali and Lijiang ethnic groups – was recreated through the use of virtual and augmented reality at the fourth annual Intangible Cultural Heritage Exhibition in Shandong province.

Meanwhile, Beijing played host to an innovation competition last year, where augmented and virtual reality were used to reconstruct the Yuanmingyuan, or Old Summer Palace, on mobile devices.

“Cultural heritage is coming into people’s lives through the national Internet Plus strategy”, Lu Qiong, deputy director of the department of cultural heritage preservation and archaeology at the State Administration of Cultural Heritage, told a forum at Tsinghua University last year.

China is currently promoting the digitisation of the collection and representation of cultural heritage items, and exploring ways to openly share digital resources and develop new equipment, Lu said.

In March, the country’s first strategic partnership - “Intangible Cultural Heritage + VR” - was formed by two start-ups in Beijing, according to vrlequ, an online industry observer .

“Digitally constructed cultural heritage offers a new model of cultural intellectual property that can potentially be extended and further utilised,” said He Yan, director of a digital technology research institute at Tsinghua University. “Cultural resources will not bound by a certain time or space.”

Guo Xiaojun contributed to the story.