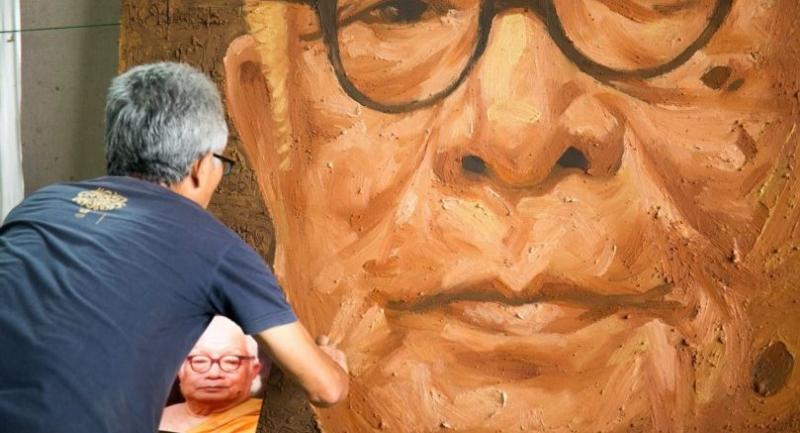 Painter Budtarad holds the monk’s photo in one hand and his brush in the other. Courtesy of Buddhadasa Indapanno Archives

If Buddhada Bhikkhu, Thailand’s most respected monk, were still alive, he would be happy to see that his engaged Buddhism is flourishing throughout Thailand and beyond.

“Buddhism is a universal religion, It can be put into practice by everyone, of every age and era,” the venerable monk wrote in his popular book “Handbook for Mankind”.

Had he lived beyond 1993, Buddhadasa Bhikkhu would be turning 111 this Saturday, May 27, a date his followers will commemorate with a weeklong series of international seminars, mediation and arts both in Bangkok and at his spiritual temple-home down south at Surat Thani’s Suan Mokh. Walking into the Buddhadasa Indapanno Archives (BIA) at Suan Mokh Bangkok, Buddhist practitioners are greeted by the |striking portrait of Buddhadasa Bhikkhu in impressionist style created by veteran painter Sompop Budtarad. The remarkable image is rendered with paint made from soil. Entitled “Buddhadasa: Monk who lives on the Earth”, the massive 2 x 2.5-metre portrait has been created mainly out of soil – sand, clay and farm-grade dirt – mixed with water collected from 11 places (mostly temples) in and around the Kingdom, notably from the place where the monk was born, where he was ordained and practised and where he died.

The 60-year-old painter, whose works explore Buddhism and Thai culture, has been studying Buddhadasa’s teachings since he attended Silpakorn University four decades ago. After graduating, he lived and worked for a time in London. He and National Artists Chalermchai Kositpipat and Panya Vijinthanasarn created the elaborate mural at the Buddhapadipa temple there in the mid-1980s.

Sompop became known for his soil-based portraits in his solo show “Born from the Earth” held last year at the National Gallery. Among the Thai icons showcased were the late King Bhumibol, venerable monks Prayudh Payutto and Phra Paisal Visalo and social activist Sulak Sivaraksa.

Yet despite studying Buddhadasa’s works for almost all his adult life, this is the first time he has painted the late monk.

“I read more of his writings when we were doing the mural at Wat Buddhapadipa in London. However, I had never painted his |portrait. Now that we are marking the 111th anniversary of his birth, I seized the |opportunity to pay homage to the late master,” Sompop says. Sompop holds the monk’s photo in one hand and his brush in the other. Courtesy of Buddhadasa Indapanno Archives

The new portrait is infused with Buddhist teachings that are “hidden” within the texture of the face. In place of beauty you see the wrinkles of the master delineated in the monotone of the soil. Just as for the previous show, the artist asked BIA’s members to collect soil and water from various places related to the monk’s life to mix with his acrylics. The soil has come from holy temples including Suan Mokh where he practised and spread his teaching, and the water from Sok Cape and Angthong Island in Surat Thani, where his ashes were scattered.

The pigments are a mix of sand, clay, glue made from sticky rice and a latex adhesive. After mixing his paint, Sompop projected the monk’s portrait onto the canvas to draft the outline. He then painted in quick strokes, using a palette knife and twigs to build texture.

“Painting with clay requires intense concentration and quick strokes in an impressionist style. While I was painting, I automatically entered into a peaceful state of mind – like meditation,” says the artist, adding that he would spend the whole day painting the huge portrait. And this week, the portrait will greet dozens of Buddhist scholars from around the globe who are coming to Thailand to share their research on “Buddhadasa Bhikkhu and Society” at Suan Mokh in Bangkok and in Surat Thani’s Chaiya district. The main aim is to promote the study, research and development of Buddhist knowledge that can be applied to sustainably solve the current problems of societies, and to keep alive the legacy of Buddhadasa Bhikkhu.

Buddhadasa (1906-1993) gained international renown for his innovative reinterpretations of Buddhist doctrine and Thai folk beliefs, fostering a reformation in conventional religious perceptions in Thailand as well as abroad. In 2006 Unesco named him one the World’s Great Personalities. Followed the late master’s teaching, nowadays Suan Mokh Bangkok has become a centre of education for both Thai and foreign Buddhist scholars and practitioners.

The seminar is being co-hosted by the BIA, Mahachulalongkornrajavidyalaya University (MCU) and Rajabhat Surat Thani University. The Bangkok session will be conducted in English at Suan Mokh Bangkok on Wednesday and Thursday.

“We are holding an international conference on the main topic of “Dharma and Society” with four subtopics. The first one is “Mind and Spirituality”. The second one is “Economics and Sustainable Development”. This is a very serious problem for every corner of our Earth. The third one is also very serious as it examines the political path we should follow. So, the third subtopic is “Social and Politics”. The last is the “Works of Buddhadasa and Legacy of Buddhadasa”.

“We have invited colleagues and friends everywhere, not only the students, researchers and monks, to take part, as well as world leaders to give the address, says Bunchar Pongpanich, director and secretary of the Buddhadasa Indapanno Archives Foundation.

The opening remarks at the Bangkok session, which has the official title “8th International Buddhist Research Seminar”, will be given by the Venerable Dr Phra Suthiratnabanpundit, director of the Buddhist Research Institute, and the opening address by the Most Ven Dr Phra Brahmapundit, rector of MCU.

A talk on“Mind & Spirituality” will be given by Ajahn Santikaro, a dharma teacher and author at Liberation Park in the US and Dr Roderick Bucknell, associate professor in Studies in Religion at the University of Queensland.

On Thursday, American author Christopher Titmuss and Dr Tomomi Ito, associate professor of intercultural studies at Japan’s Kobe University will talk about “Social & Political Perspectives”, while “Works & Legacy of Buddhadasa Bhikkhu” will be presented by Dr Chenhuang Cheng, director of the Mahayana Buddhist Institute of Chingchueh Sangha University, and Dr Louis Gabaude of the French Institute of Asian Studies. Saturday, his birthday, will be marked by daylong dharma practise at Suan Mokh, where the grounds will resonate with his voice and teachings. Courtesy of Buddhadasa Indapanno Archives

Following the two-day seminar in Bangkok, the organisers will head to Suan Mokh in Chaiya, where events will be held on Friday and Saturday.

At the 2nd International Conference on Buddhadasa Studies a roundtable discussion, “Dhamma and Society”, led by Ajahn Santikaro Upasaka, Ven Zizhuo Shi, the director of the Luminary Research Institute, Dr Martin Seeger of the University of Leeds, UK and Dr Bucknell will be the focus on Friday morning.

The afternoon will feature “Flashback Buddhadasa Bhikkhu”, a journey back in time from the late monk’s birthplace in Phumriang, Chaiya district to his practise at Wat Photharam, Wat Ubon, Wat Trapangjik (the old Dharma Hermitage) and Wat Phra Borommathat Chaiya Ratchaworawihan.

The event will wrap with live music from Tanes Warakulnukorh and his band and a “Dhamma sharing with Buddhadasa Bhikkhu” session.

Saturday, his birthday, will be marked by day-long dharma practise at Suan Mokh, where the grounds will resonate with his voice and teachings.

Buddhadasa, the name he chose, means “slave or servant to the Buddha”, and throughout his life, the revered monk was known to be just that. Few have worked as hard to fulfil the Buddha’s legacy as this devoted servant.

- The seminars on “Buddhadasa Bhikkhu and Society” will be held in Suan Mokh’s Bangkok branch on May 24 and 25 and in Chaiya on May 26 and 27. Admission is free.

- Dharma practise will be held at Suan Mokh Chaiya from May 28-30 and at Dipabhavan |meditation centre on Koh Samui from May 31-June 2.