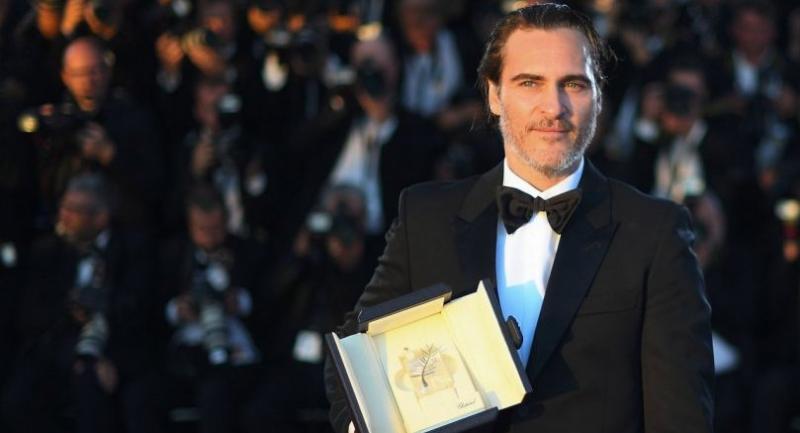 US actor Joaquin Phoenix poses on May 28, 2017 during a photocall after he won the Best Actor Prize for 'You Were Never Really Here' at the 70th edition of the Cannes Film Festival in Cannes, southern France. / AFP

His winning role as a hammer-wielding hitman in Lynne Ramsay's "You Were Never Really Here" combines both archetypes in a magnetic performance, laying bare his monosyllabic character's physical and psychological wounds.

Variety magazine said the 42-year-old, who bulked up for the part, "never plays wounded the same way twice", praising his "eccentric, sometimes hilarious inversions of the hardman archetype".

The actor -- three times Oscar-nominated, including for playing troubled country singer Johnny Cash in "Walk the Line" -- made a glancing allusion to his own childhood traumas when asked at Cannes about his latest role, which critics called an "exquisite anxious study in damage".

He plays Joe, a former soldier who is hired by a New York state senator to rescue his daughter from a paedophile sex ring.

But Joe is wracked by his own demons, self-harming and suffocating himself with plastic bags to shut out the memories of his childhood and the Iraq war. Phoenix grew up in an hippy family that travelled around South America with the Children of God sect before settling in Los Angeles, where his parents hired an agent to launch their children's acting careers.

Joaquin, then known as Leaf, and his older brother River landed television roles in the early 1980s, with the startlingly handsome River at first overshadowing him.

River Phoenix became a star at 16 in the 1986 drama "Stand By Me" before playing the young Indiana Jones in "Indiana Jones and the Last Crusade" and becoming the darling of the art house scene with "My Own Private Idaho" in 1991.

But when Joaquin was only 19 he lost his brother to a drugs overdose, with the recording of Joaquin's desperate call for an ambulance sold to the media.

After River's death Phoenix initially did not want to act again, but he was tempted back and turned in a remarkable performance opposite Nicole Kidman in Gus Van Sant's satire on celebrity, "To Die For" in 1995.

- Channelling his dark side -

A series of bad-boy parts followed with the actor channelling his dark side to play an abusive boyfriend in Oliver Stone's crime flick "U Turn" and a sex shop manager in the thriller "8MM".

All this culminated in his portrayal of the evil Roman emperor Commodus tormenting Russell Crowe in "Gladiator" (2000), which earned him his first Oscar nomination for best supporting actor.

Five years later he learned to sing and play guitar to emulate Cash in "Walk the Line" -- earning his second Oscars nod -- but afterwards he gave a series of catastrophic concerts and rambling interviews which seemed to suggest he had lost the plot.

But the socially engaged and strictly vegetarian actor was actually making a fake documentary, "I'm Still Here", with his brother-in-law Casey Affleck.

Three years later Phoenix made a triumphant return in Scientology drama "The Master", sharing the best actor award at the Venice film festival with Philip Seymour Hoffman for their roles.

And a year later he followed up with the sci-fi romance "Her" as a lonely writer who develops a relationship with a computer's operating system.

Although Phoenix denied he had any hand in writing "You Were Never Really Here", Ramsay, the director, said he did improvise lines and scenes.

He said that despite his character killing and maiming with a hammer, he wanted to explore the "impotence of masculinity".

"We wanted to get away from that idea of the male hero," he said.

"I think what's maybe interesting about this film... is that really, the girl is ultimately the one that saves herself."