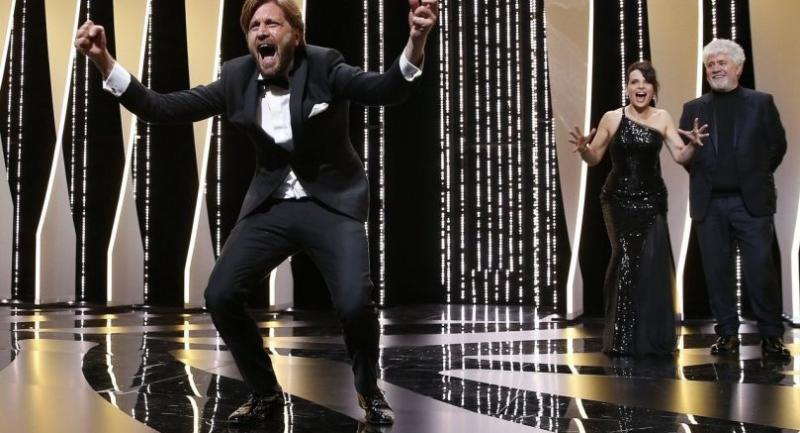 Swedish director Ruben Ostlund arrives on stage after he was awarded with the Palme d'Or for the film 'The Square' on May 28, 2017 during the closing ceremony of the 70th edition of the Cannes Film Festival in Cannes, southern France. / AFP

Known for the dark sense of humour he honed during his years as a ski bum, Ostlund made his big international breakthrough in 2014 when his "Force Majeure" won a lesser prize at Cannes.

That black comedy -- which explored family relationships fractured after an avalanche at a ski resort -- opened Hollywood's gilded doors to Ostlund.

Fox Searchlight bought the rights to a US remake, and he has received a bundle of scripts since.

But the modest Ostlund, who jumped around the stage shouting "Oh my God!" when he won the Palme d'Or for his film "The Square", is in no rush to dash off across the Atlantic to make blockbusters.

"It's very interesting, this desire to get close to stars" but "I find it totally uninteresting", he said.

The 43-year-old had remained stubbornly in his home town of Gothenburg.

He went to film school there, and still lives there. "The Square" was filmed partly there, as was "Force Majeure" and his 2011 film "Play" about a child street gang, which was heavily debated in Sweden for addressing issues of power and race. "The Square" is his first movie in English and stars US actress Elisabeth Moss of "Mad Men" fame, British actor Dominic West known from "The Wire", and Denmark's Claes Bang of "The Bridge", who turned in a bravura performance as museum director.

Ostlund said the picture was his best yet.

The film is an often hilarious art world satire exploring creative liberty, free speech and the blurred lines between the sexes.

It is set in a museum where an artist exhibits an installation meant to promote altruism, providing people with a symbolic square where only good things can happen. But the manager of the museum, played by Bang, hires a ruthless PR firm to build buzz, and things get out of hand.

For Ostlund, it is situations, rather than characters, that make a movie. And the film certainly throws up some memorable ones.

One set-piece featuring a wild, bare-chested man performing as an ape wreaking havoc at a posh gala dinner has already entered festival legend.

Ostlund has been described him as a "kleptomaniac", stealing scenes from his own life, those of his friends, and even YouTube for his films.

Ostlund decided to go to film school after making extreme skiing movies when he lived as a ski bum in the Alps from 1993 to 1998.

"I learned a lot about endurance during those years. You were outside every day from December to April. That's three times as many shooting days as when you're filming a feature film. I still feel like I have that capacity, I'm prepared to put a lot of work into my films," he said.

He is known for being meticulous, and can ask his actors to do the same line over again more than 40 times.

Moss and West were "quite lost" on the set at the start -- they're "more used to doing four or five takes and then move on," he told Swedish daily Dagens Nyheter.

He had to instruct them to "save their energy, so they would realise that their performance had to be its best at the end of the day," he said.

The first Swedish film to compete for the Palme d'Or in 17 years, Ostlund made "The Square" with the clear aim of getting it into the official competition at Cannes.

"There are scenes in 'The Square' made specifically for that screening with the tuxedo-clad crowd," he told the Swedish Film Institute in an interview after the film was selected for the festival.