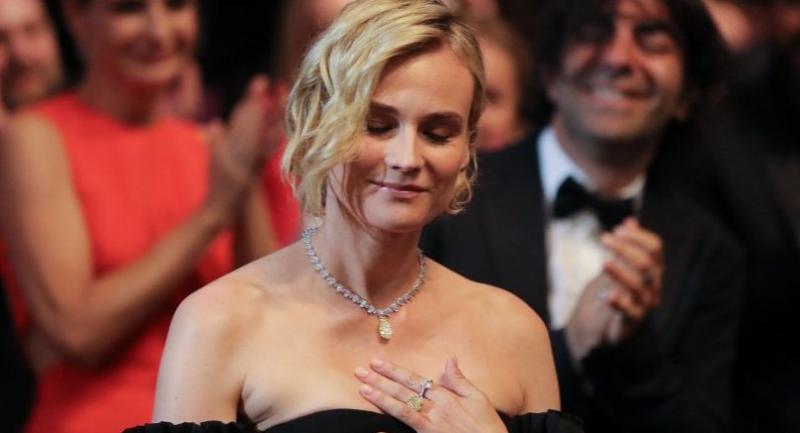 German actress Diane Kruger reacts after she won the Best Actress Prize for her part in 'Aus dem Nichts' (In the Fade) on May 28, 2017 during the closing ceremony of the 70th edition of the Cannes Film Festival in Cannes, southern France. / AFP

Kruger, best known from blockbusters such as "Troy" and "Inglourious Basterds", plays a woman who loses her husband and son in a neo-Nazi bomb attack in "In the Fade" (Aus dem Nichts) by acclaimed German-Turkish director Fatih Akin.

Variety praised her "powerhouse performance" as the distraught tattooed and drug-taking Katja who fights for justice and ultimately vengeance for her family.

Kruger said the emotional demands of the role were "terrible... The film almost killed me. It was terrible to live with, really upsetting."

"I haven't worked since... I haven't read a script since. The film really changed me, it changed my life," she told reporters at Cannes.

Akin wrote the screenplay based on one of Germany's biggest post-war scandals: the discovery in 2011 of a group calling itself the National Socialist Underground (NSU) which carried out a series of undetected racist murders over the course of a decade.

Akin told German media that he long wanted to work with Kruger, who had called the man behind hits such "Head-On" and "The Edge of Heaven" her favourite German director.

The former model, now 40, is a regular front-row guest at the Paris fashion week shows, and went without makeup on set in Hamburg. Born Diane Heidkrueger in what was then West Germany, the statuesque beauty left home as a teenager for Paris, quickly landing catwalk jobs for Marc Jacobs and Dolce and Gabbana and print ad campaigns for Yves Saint Laurent and Chanel while polishing her English and French skills.

Hollywood soon beckoned, however, and she got her break as Helen in Wolfgang Petersen's 2004 swords-and-sandals epic "Troy" co-starring with Brad Pitt and Orlando Bloom.

Kruger went on to star as German actress turned Allied spy Bridget von Hammersmark in Quentin Tarantino's Nazi-bashing "Inglourious Basterds", which competed for the Palme d'Or in Cannes in 2009.

She won plaudits for the role, in which she channelled Marlene Dietrich with a blend of Teutonic glamour and moral fortitude in wartime.

Her CV includes diverse roles in films such as the time-travel adventure "National Treasure: Book of Secrets" with Nicolas Cage and as the wife of a South African prison guard who befriends Nelson Mandela in "Goodbye Bafana".

And she played a US homicide cop in the FX series "The Bridge" set in the drug violence-torn border city of Ciudad Juarez.

Kruger has also shown off her French on screen in films such as "Farewell, My Queen" by Benoit Jacquot, an erotically and politically charged drama about a lovelorn Marie Antoinette on the eve of the French Revolution.

After its screening at the Berlin film festival in 2012, Kruger brushed aside a question on whether she was playing cinema's first "lesbian Marie Antoinette" but said she could identify with her as a foreign-born woman living in a world of splendour.

"Some think she was a poor little party girl that was put in a situation that she was just overwhelmed by," she said, perhaps recalling Sofia Coppola's much-maligned "Marie Antoinette".

"Others think she was a terrible queen and spoiled rotten. I was trying to not judge her... I could relate to her as a woman."

Kruger is at home on the festival circuit and holds the rare honour of having served on the juries at Berlin, Venice and Cannes.