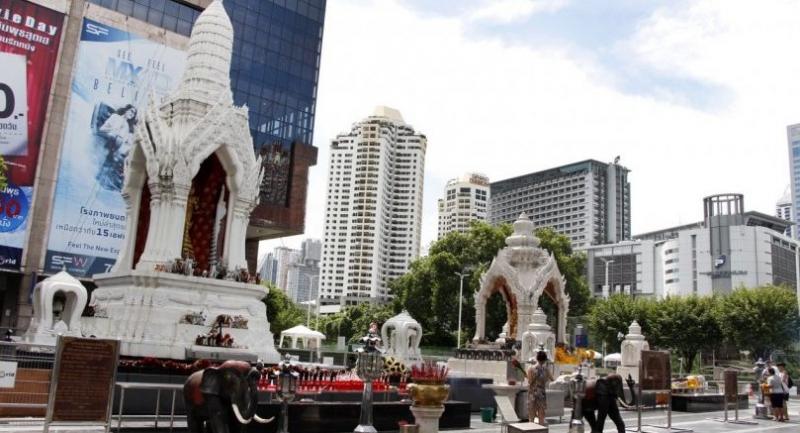 CentralWorld has shrines to the deities Trimurti and Ganesh, between them able to cover a wide range of wishes.

THE RATCHAPRASONG area, which has emerged in recent years as Bangkok’s slickest and most modern business and shopping district, is now building a cultural bridge with tradition.

Linking all the activities is a “Walking Bangkok” designated path designed to encourage sightseeing on foot. Its key points of interest visit eight different Hindu deities. The Erawan Shrine, erected in 1956, has a golden likeness of Brahma.

“The district is perfect for walking because there are so many diverse attractions in close proximity,” says Tourism Authority director Thapanee Kiatphaibool. “With infrastructure that facilitates walking, visitors will find it far more convenient to stroll around.

“We tried a cultural walking route many years ago and tourists from Hong Kong, Singapore and Malaysia liked it, despite having no skywalk at the time. The Ratchaprasong Shrine & Culture tour is expected to be a magnet for foreign visitors this summer.”

With an “Eat, shop and pray” theme, the route has bilingual maps and guidebooks relating the stories of the deities worshiped at eight locations and the customary ways of paying respect to them.

You’ll be able to choose and “pin” the locations on the map that interest you most and create your own 30-minute tour.

The route, adhering to the inter-linked skywalk, runs from CentralWorld to Gaysorn Village and the Erawan, InterContinetal and Amarin Plaza.

“Ratchaprasong’s success lies in pulling together the government and private sectors,” says Chai Srivikorn, president of the trade association. “We create lifestyle events that bear our own unique signature and attract visitors all year round.

“The skywalk – the Ratchaprasong Walk – links to 18 major establishments and eight revered deities in the neighbourhood. The skywalk project started in 1999 and proved to be the perfect solution for urban people – a safe and comfortable walkway to avoid the road traffic and crosswalk problems.” The name Ratchaprasong signifies “royal intention”, and it was indeed King Rama IV who laid the foundations for the district when he built Saprathum Palace there, with its massive vegetable garden and lotus pond, as well as Wat Prathum Wanaram.

During the reign of Rama V the area became Bangkok’ first mulberry plantation. Silk was cultivated in the present-day locations of Siam Square and CentralWorld.

“Rama IV was the first of the Chakri kings to reside outside the Grand Palace – Siam was no longer under threat of war from its neighbours,” says archaeologist Paothong Thongchua.

“After his father died, King Chulalongkorn decided to pull down Saprathum Palace and he put Prince Benbadhanabongse in charge of developing a mulberry garden and sericulture school on the site. The Prince hired

Kametaro Toyama from the University of Tokyo to develop a hybrid of Thai and Japanese silk.

“Then, in 1902, King Chulalongkorn had the two-kilometre Ratchadamri Road built because the residential and trading areas were expanding. It ran from the intersection where the Dusit Thani Hotel is now to Chalerm Loak Bridge and later to Ploenchit, and the crossroads was named Ratchaprasong.” What was once a mulberry farm filled with hungry silkworms is now a ribbon of state-of-the-art shopping complexes, five-star hotels and office skyscrapers. Its inhabitants are chiefly hungry for wealth, and in the midst of the district are enshrined statues of eight deities that promise that prosperity.

The walking tour begins at the Grand Hyatt Erawan Bangkok, home to the country’s second-most famous religious attraction, the Erawan Shrine. Visitors are drawn to the elaborate, golden, flower-bedecked statue of the four-headed Hindu God of Creation, Brahma, in a compound where costumed performers can be hired to dance and speed their prayers to Heaven.

The shrine was built in 1956. Brahma holds symbolic items in each of his four hands – bread, scripture, a water jug and a lotus bloom, vowing to ward off evil. Tourists from Singapore, Hong Kong and the Chinese mainland are particularly enamoured of the site, esteeming Brahma – “the writer of destiny” – for his willingness to grant any wish.

“In Hindu belief, Shiva is the Destroyer, Vishnu the Protector and Brahma the Creator,” explains Ajarn Paothong. “Brahma was the first divinity enshrined at Ratchaprasong, signifying its creation as a major commercial and transportation hub.”

At Amarin Plaza, a few minutes’ walk away, the Indra Shrine presents an emerald statue of the God of Thunder, whose hands hold a sword, javelin, bow and conch shell, with which he is able to split apart oceans and mountains and restore peace.

The god is revered for upholding goodness, expelling evil, maintaining business prosperity, and safeguarding people who observe a virtuous life. Narayana is enshrined in front of the InterContinental to safeguard the site and its visitors.

The InterContinental Hotel on the opposite side of the road has its own protector within the Narayana Shrine. The God of Protection is depicted riding a garuda and represents the supreme trinity, ensuring charisma, a peaceful life, happiness, career success and the ability to overcome obstacles.

Gaysorn Village has the Lakshmi Shrine, where the faithful pray for wealth, and the Jatulokbal Shrine, where the God of Four Directions represents a combination of Lord Vesuwan and Kuvera and also shields against danger.

The local Big C Super Centre even has a god on the premises – a statue of Umathevi typically portrayed with either a long-handled trident or sword, as well as a single flower. She rides a tiger, indicating her fierce strength against enemies. This is the God of Compassion, beloved for her strong devotion to her husband Shiva and family, and thus ideally appealed to for family blessings. Jatulokbal is the God of Four Directions.

CentralWorld houses the Trimurati Shrine, where the God of Love pools the powers of Brahma, Narayana and Vishnu. His statue was placed here during World War II to keep bombs from falling on Petchaboon Palace, which stood there at the time. The shrine draws pilgrims seeking different kinds of protection, along with good fortune and romance.

Sitting alongside the goddess Trimurati is a shrine to Ganesh, God of Success. The son of Shiva and Umathevi bears an elephant’s head and in his hands are a short-handled trident, broken tusk, rope and beads that snake around his belly, signifying power from within.

Revered as divine patron of the arts and education, Ganesh is the deity that students and artists turn to in the hope of success in the classroom and their careers.

>> The guidebooks and maps are available for free at the Ratchaprasong Tourist Information Centres at Gaysorn Village and Amarin Tower and at www.TourismThailand.org/thaifest and www.BkkDowntown.com.