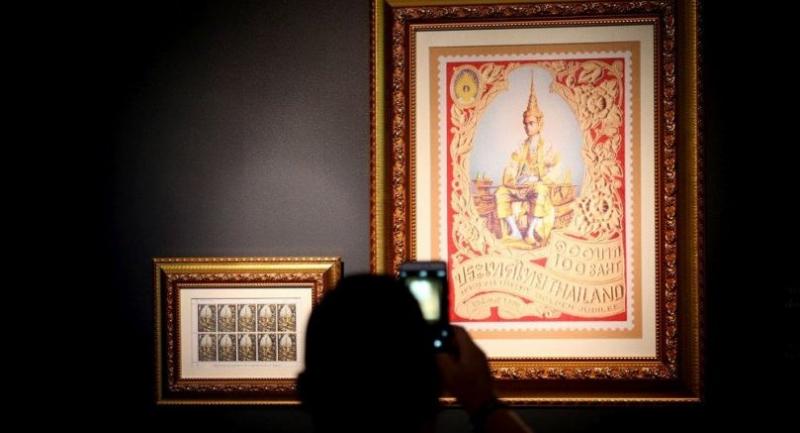 On display at the Grand Postal Building is every set of stamps related to the late monarch.

DURING THE course of His Majesty the late King Bhumibol Adulyadej’s 70-year reign, Thailand Post issued 79 sets of postage stamps related to the monarch, in 353 different designs, and sold more than two billion individual stamps.

That was from the first collection in 1947 to the time of his death last October. On display at the Grand Postal Building is every set of stamps related to the late monarch.

And it’s now put all of them on display in the exhibition “Stamp Khong Phor” (“Stamps of the Fatherly King”) at the Grand Postal Building in Bangkok.

“He is the heart and soul of the nation, and his great devotion to improving people’s lives throughout his long reign is illustrated clearly by the large number of stamps that tell the magnificent history.”

The exhibition walks through that history from the inaugural “Siam” series produced in 1947 to what’s billed as “the longest stamp in the world”, issued last April.

The “Siam” series was the first set of stamps issued during the late monarch’s reign, in 1947.

The stamps are displayed next to blow-up versions so you can appreciate the details, along with the original photos of the late King and his family from which the stamp imagery was derived.

There are also videos and animated films about the King’s tireless travels upcountry, during which he’d reach out to people in the remotest places to see what they needed. Stamps from 1996 commemorate His Majesty’s golden jubilee on the throne.

The first of five exhibition rooms – “Genesis of the Thai People’s Happiness” – has a video of the coronation on May 5, 1950, four years after he ascended the throne at the age of 19. You can listen to the oath he gave that has reverberated through the decades: “We shall reign in righteousness for the benefits and happiness of the Siamese people.”

On view are stamps in six designs issued in 1996 to commemorate the golden jubilee of his accession to the throne. One of them features a portrait of the King in full regalia, enthroned beneath the nine-tiered umbrella. Another has Their Majesties the King and Queen making their first public appearance after the ceremony. A Bt100 stamp – again showing the late King on the throne – was printed with embossed golden foil using a four-colour press.

Their Majesties’ travels around the country are captured on stamps and in photos seen in “The Royal Couple” exhibit hall. There are also pictures of their wedding at Srapathum Palace on April 28, 1950, and of MR Sirikit Kitiyakara being crowned Queen soon after. Their Majesties’ portraits appear on stamps commemorating their wedding and their 15th, 25th and 50th anniversaries (in 1965, 1975 and 2000). The most recent stamp devoted to the royal couple came out last year, in celebration of the centenary of Thai Rice Research. It shows them visiting Thung Makham Yong, a royally initiated paddy field in Ayutthaya, in 1996. Heart-shaped stamps embellished with Swarovski crystals were issued in 2010 to celebrate Their Majesties’ wedding anniversary.

Marking six decades of the couple’s marriage, a pair of heart-shaped stamps appeared in 2010. The first has their marriage portrait on a pink background and the other a more recent portrait together on a field of yellow hearts. Both stamps are embellished with Swarovski crystals.

Smorn says 10 of the 79 sets of stamps related to the late King are considered “definitive”, while the rest are commemorative.

“His Majesty had to grant permission for each set before it could be published in the Royal Gazette and finally issued to the public.” Embossing with gold foil first appeared on a Bt100 stamp released in 1987.

Thailand Post applied emerging technology and printing techniques first to stamps related to the King before they were used on stamps depicting other subjects. The first embossed printing in gold foil was used for a Bt100 stamp marking his fifth-cycle birthday in 1987. Embossed printing in gold, silver and copper foil was initially used for a set of three stamps for his sixth-cycle birthday in 1999. A Bt9 stamp issued in 2011 carries an image of the late monarch harvesting rice, along with an actual grain of rice from that year’s Royal Ploughing Ceremony.

Veena Chantanatat, former chief of Thailand Post’s design division, conceived 11 of the 79 royal sets of stamps. The Silpakorn University-trained artist preferred transposing photos of the King to drawings – her personal area of expertise.

“The challenge is in not distorting the image when copying it from the photo,” says Veena, who only recently retired from the job she held for 30 years.

“The photos have to be carefully chosen in terms of beauty, appropriateness and especially proportions, since text has to be added.” A set of nine stamps issued in 2007 to celebrate the late King’s 80th birthday proved particularly challenging because they bore a series of portraits beginning in childhood.

“It took a long time to select the right photos of him at different ages,” Veena says. “And I spent another three months completing the drawings.”

The third room, “4 Regions: The King’s Royal Visits” has photos and stamps showing people’s gratitude to the father of the nation for supporting them. A 2006 set of six stamps marking the 60th anniversary of His Majesty’s accession to the throne depicts him on his travels, interacting closely with ordinary folks and even sitting on a dirt road to rest.

The “9 Works for Thai Subjects” exhibit is devoted to his development projects that improved many aspects of life, from education and medical care to agriculture.

“One of the jobs I’m most proud of was designing four stamps in 2015 for his 88th birthday,” Veena says.

“The stamps had representations of earth, water, wind and fire to indicate the numerous projects the King devised to ease people’s suffering, like means of producing alternative fuels, rainmaking techniques, the Chaipattana aerator, windmills and solar cells and dams and irrigation projects.” The final room, “3 Principles the King’s Philosophy”, focuses on the guiding words espoused by the late King in his advocacy of a sufficiency economy and sustainable agriculture – understand, reach out and develop.

Here you can see the last stamp issued during his reign – the magnificent 70-millimetre-long edition that immediately became a global collector’s item as the “longest” stamp ever issued in the world. It bears six different images of the King working at royally initiated research-and-development centres. Released last April to celebrate His Majesty’s 70th anniversary on the throne, it utilises AR (augmented reality) technology so that it can be scanned with the Asian Stamp mobile-phone application. The AR code is implanted on the stamp and, when scanned, plays a nine-minute video about the R&D centres.

It was not just history’s “longest” stamp but also the first “living” stamp, able to “interact” with people. On leaving the exhibition, visitors see an enlarged image of a forthcoming stamp, a preview of the one to be issued on July 28 to mark His Majesty King Maha Vajiralongkorn’s 65th birthday. It will be the first stamp of his reign.

The Bt10 stamp embossed with gold foil and produced with the four-colour printing technique has a portrait of the King on a yellow background, with his initials and emblem in the upper right corner.

>> The exhibition “Stamps of the Fatherly King” continues through October 31 at the Grand Postal Building in Bangkok’s Bang Rak district.

>> It’s open daily except Monday from 9am to 7pm. Tours are conducted in Thai every hour.

>> Sister exhibitions without the multimedia technology are being held at the Philatelic Museums in Bangkok’ Sam Sen Nai district, Chiang Mai, Phuket and Khon Kaen until December 31.