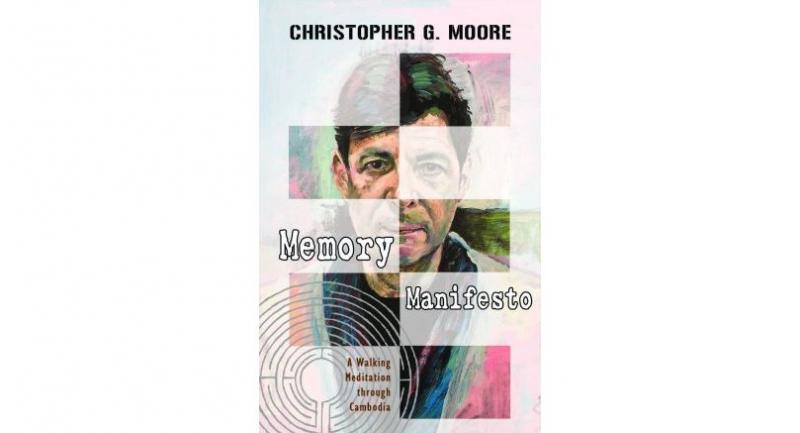 By Paul Dorsey
The Sunday Nation

Christopher G Moore prises open his ‘memory foot locker’ for some time-travelling, and we all get to see the world more clearly.

Time will tell whether Christopher G Moore has, as he believes, conceived a new literary genre, the “memory manifesto”, but his latest book, bearing that title, is certainly an extraordinary undertaking, melding memoir, science and portraiture in an entirely unprecedented form of assemblage.

The core of “A Memory Manifesto” is an examination of how Cambodia has withstood the horrors of the Khmer Rouge period. That evaluation, deeply personalised and poignant, gives Moore the basis on which to review his own life, study the power and the failings of the human memory, and consider this hi-tech world’s shifting perceptions in art, commerce and politics.

This is the promising “new genre”, placing one’s own autobiography within history’s spinning clockwork and discovering, if not its karmic rewards and retributions, then at least its interconnected validity. While steeped in psychology, the book is eminently readable and often fascinating.

Thailand’s finest expatriate crime-fiction novelist, who’s often displayed his other talent as an essayist on topics all too real and immediate, has stitched together a quilt of episodic memory (personal recollections) and semantic memory (what’s learned from others).

He ponders who we were before books, who we are now as “every whorl of our digital fingerprints” is tracked and shared, and who we’ll become once artificial intelligence gives us the ability to remember everything. Setting aside for the moment his popular fictional Bangkok-based detective Vincent Calvino (whose most recent adventure, “Jumpers”, was reviewed on this page in May), Moore has here answered memory’s siren call and returned to Phnom Penh for another of many visits.

He was there in 2011, accredited to cover the opening of the Khmer Rouge war-crimes tribunal now slowly drawing to its inevitably dissatisfying conclusion. Earlier visits produced the Calvino thriller “Zero Hour in Phnom Penh” and the short-story anthology “Phnom Penh Noir”.

In January this year, Moore, older and pensive, returned once again to confront time, the “brutal editor of memory”.

“My personal mandala contains a space called Cambodia,” he begins, immediately invoking that most sublime aid to meditation, with all its mystical signifiers forming a map of time and space.

In “a memory-recovery adventure” spanning 25 years and 35 chapters of lyrically intertwined recollections, Moore still holds true to the definition of “noir” that guides his dark crime novels, as “throwing light on the power of sinister forces”.

“The Cambodian Year Zero was the starting point of a memory reset,” he writes. That was 1975, when the Khmer Rouge triumphed in the civil war and set about waging a different kind of war “against the knowledge warehoused in the minds of Cambodians ...

“They sought to blow up the drainpipe where information flowed from the past to the present, lay down a new pipe and restart the flow; it was a historical drainpipe project that almost succeeded.”

By the time of Moore’s first trip there in 1993, the KR had been chased into remote strongholds and UN peacekeeping troops were in charge of the capital. Already the forgetting had begun. When he went back for the war-crimes tribunal, young students told him they had no knowledge of what had happened.

Among a multitude of engaging episodes recounted, Moore accompanies a landmine-extraction team composed of former battlefield foes who’d actually laid the mines in the first place. Each night they compare memories of where they’d put the devices and then the next day test those memories, “as fragile as fireflies”.

Having by now explained the intricacies involved in the brain’s capacity to recollect events accurately – and its abject failure to do so with any consistency – Moore returns to the collective amnesia of the populace and to those students who know nothing.

“If I’d survived the killing fields, the likelihood is great that I would have done to my memories what they did. I’d have buried them, and like the de-miners I would have forgotten where I buried them.”

Does Cambodia really want to dig up its terrible past? Prime Minister Hun Sen insists no, that to dig any deeper would only revive old hatreds. And Moore believes there still exists a large number of KR sympathisers, still attuned to the traditional ways, the same Old People who from 1975 to 1979 ran roughshod over the modern New People.

But “Memory Manifesto” goes far beyond the KR years and their aftermath.

As a memoir, it’s revelatory and often amusing, covering not just Moore’s literary endeavours (and Hollywood hopes), but also some of his personal quirks, as when he takes a bar girl back to his Phnom Penh hotel room.

In what begins as muted comedy, amorousness is distracted as he watches a live telecast of the US Congress voting to impeach Bill Clinton. It was December 19, 1998, and he still remembers it vividly – yet he has no recollection whatsoever of the Senate vote to acquit that followed in February. The reason? “I had sex on 19 December 1998,” Moore admits, braver than the former president.

“I was enjoying sex while watching an official vote to dislodge the most powerful man in the world from office for lying about sex.” (The irony that links the Clinton and Trump presidencies isn’t lost on him – “What has changed is a cultural shift. Over time we’ve become accustomed ...”)

Looking deeper, Moore is haunted. He realises that the bar where he’d hired that young Cambodian lover was “another kind of refugee camp processing women who had been children in the Khmer Rouge Guernica. She’d gone with me as she’d witnessed others going in silence to their executioners.”

In his hotel room, “My attention was on Bill Clinton as I lived that moment detached from the history of the person next to me in bed.”

At another time in a different Phnom Penh hotel room, Moore discovers a Beverly Hills Polo Club shirt flung and forgotten behind the bedside table. He considers writing a story around it – only to discover that what he’d assumed was some rich American’s polo shirt was in fact just a cheap knock-off that anyone could buy online.

“Capitalism had made everyone a spinner of fictional world. We shouldn’t be surprised to hear today’s shout-outs about ‘fake news’ and ‘alternative facts’ as we live in a world of objects and events whose names and labels only fit our reality with a flight of the imagination.”

But the shirt also triggers another memory, of the time his passport suddenly went missing at the Rangoon airport check-in. He noticed a gap in the desk. When pried open it revealed a treasure trove of other passengers’ lost items, “a history of travellers who like me hadn’t been present at a significant moment. Their mind, like mine, had been someplace else just then, as they entered a time and space where things went missing.”

How memory functions or fails in such instances is the adhesive theme binding “Memory Manifesto”, but it’s the heart, not the brain, that gives the book its emotional power.

Many foreign friends make appearances – the painters Chris Coles and Peter Klashorst, “midwife at the birth of Vincent Calvino” John Stevens, humanitarian and musician Chris Minko, “The Killing Fields” director Roland Joffe, and Dave Walker, the writer killed in Siem Reap in 2014, probably for “asking the ‘why’ type of question”.

But the Cambodians profiled provide the most moving stories. Genocide survivor Sam Sotha, in charge of landmine clearance, has a map that suggests he’ll be busy for the next 300 years. Moore offers to help writer Bopha Phorn in a crisis, only to learn a lesson about boasting of “big-league connections”.

Kosal Khiev, born in a refugee camp, taken to the US, jailed for gang violence and then deported to a country he’d never known, has built a new life as a street rapper.

In “chasing after the memory of the ghosts of Cambodia”, Christopher Moore has written a memoir for each of us. And he’s done all the heavy lifting on our behalf.

A Memory Manifesto: A Walking Meditation through Cambodia