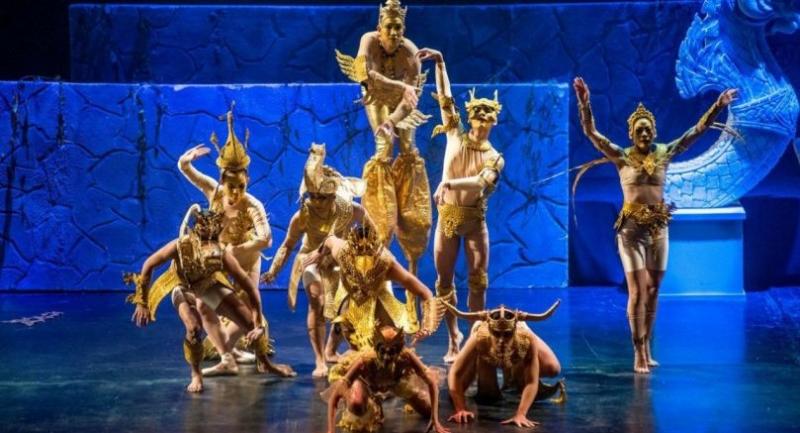 Composer Somtow Sucharitkul is this coming weekend staging another episode of his sprawling work in progress, “The Ten Lives of the Buddha”.
It will be at the Thailand Culture Centre Saturday through Monday.
“Suwana Sama – The Faithful Son” is the third entry in a cycle of DasJati stories that will be familiar to all Buddhists.
Somtow has for 10 years been working on the cycle of “music dramas” (he shuns the word “opera”), each episode pertaining to a different incarnation of the Lord Buddha.

When completed, says London-based magazine Opera Now, it will be “the largest integrated work in the history of classical music”.
This is the Bangkok debut for “Suwana Sama”, whose premiere two years ago at Rangsit University’s Suryadhep Auditorium in Pathum Thani garnered rave reviews as far away as London and Warsaw.
Saturday’s performance in Bangkok is dedicated to Her Majesty the Queen, whose birthday follows a week later.
Somtow describes “Suwana Sama” as a simple story of miracles and of the love of a mother that can reach even beyond death.
The Opera Now reviewer said it “proved both thoroughly enjoyable and deeply moving, with a stunning and magical ending”.
An international cast has been assembled, spearheaded by Thailand’s Jak Cholvijarn as Bodhisattava, the incarnation of the Buddha. Chicago’s Stacey Tappan, Australian bass Damian Whiteley and dramatic soprano Cassandra Black from Houston, Texas, as a statue that comes to life round out the main cast.

Award-winning conductor Trisdee na Patalung will conduct the Siam Philharmonic Orchestra. The opera will be sung in English with Thai subtitles.
Each work in the DasJati cycle has different musical innovations. This one is scored for two chamber orchestras, positioned on either side of the conductor.
They represent the dualities of the story – two villages, an urbane court and a magical forest, natural and supernatural, gods and humans.
The noble gods of the Tavatimsa Heaven also perform earthly roles as very venal humans.
“This is not ‘opera’ in the traditional sense, which is why I use the word ‘music drama’,” says Somtow. “In the DasJati music dramas, dance propels the story as much as singing, and modern narrative modes derived from cinema underscore the presentation.”
It is also a new way to present the Buddhist message in an accessible format, reaching more and more people both in Thailand and overseas.
As the Indian ambassador tweeted recently, speaking of the Buddhist link between India and Thailand, “I can’t think any other contemporary work that brings out the civilisational connections so beautifully.”

Four of Somtow’s DasJati works have already had Bangkok premieres – “The Silent Prince”, “Mahajanaka”, “Bhuridat – The Dragon Lord” and “Nemiraj – Chariot of Heaven”.
The first in the series, “The Silent Prince”, travelled in Europe last year. The Munich newspaper Nordbayerischer Kurier offered “a massive round of applause for an opera that is scenically otherworldly, yet musically accessible, whose music soars high even as its ethics plumb depths of profundity.”
THE STORY CONTINUES
- “Suwana Sama – The Faithful Son” will be presented at the Thailand Cultural Centre from Saturday through Monday at 8pm except Sunday, when the curtain rises at 4pm.
- Seats cost Bt500 to Bt5,000 at www.ThaiTicketMajor.com.
-To arrange bookings for large groups, schools, clubs and DasJati Pledge Supporters, call Khun Ratana at (089) 136 9981 or (02) 231 5273.