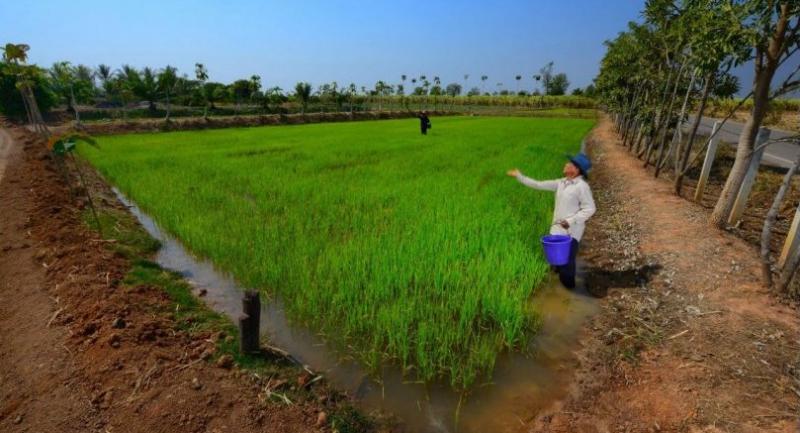 HIS MAJESTY the late King Bhumibol Adulyadej’s sufficiency economy philosophy is coming under the spotlight in a new initiative being launched by sugar producing giant Mitr Phol Group.

Known as “Tham Tam Phor”, the project will see the establishment of 70 agricultural learning centres around the country before the end of this year in commemoration of the 70th anniversary of the King’s accession to the throne.

“Mitr Phol Group has operated in the agricultural sector for the past 60 years with the fundamental goal of bolstering the self-sufficiency and quality of life of farmers. Many projects have already been developed as a result of this commitment,” says Buntoeng Vongkusolkit, the group’s chief operating officer. “Under our concept of ‘Ruam Yoo Ruam Charoen’ (‘Grow Together’), we have combined this philosophy with the new theory of agriculture for the betterment of farmers and communities. Today, our aim is to inspire small sugarcane farmers, communities and the general public to embrace the sufficiency economy philosophy. We plan to achieve this through our new initiative that will educate farmers and improve their living conditions, allowing them to enjoy stronger business and lead happier lives.”

Small-scale sugarcane farmers will be the initial beneficiaries of the project. Eight agricultural specialists will educate them in the new theory of agriculture through training courses in the provinces of Suphan Buri, Singburi, Khon Kaen, Chaiyaphum, Kalasin, Loei, Amnat Charoen and Tak, all of which are home to Mitr Phol’s factories.

“I’m fascinated by design and the King’s sufficiency economy philosophy and thought long and hard about how I could combine the two. I was given the chance to design and develop two royal project development centres in Teen Tok and Huai Phak Phai (Thung Roeng) in Chiang Mai,” says Nopanit Isarankura Na Ayudhya, 29, a consultant to Mitr Phol Group. “At Teen Tok, I found an abandoned garden at Pha Nam Lod with a gigantic stone, which I realised could become a tourist attraction. I developed the garden and set up a coffee shop near the stone so that tourists could come closer to nature.

“At Huai Phak Phai, I designed the rose greenhouse also as a tourist attraction. The aim was to make these royal project development centres self-sufficient and not have to rely on funding or even admission fees. Today the rose garden is very popular and being expanded into the second phase,” he continues.

“I spend most of my life in the city so I guess people wonder how I can be part of the sufficiency economy. But it’s really all about having enough to get by. I split my money into several parts. Some I save for investment, and some to use to travel to gaining knowledge and experience. And I use my knowledge to develop myself and the people around me,” adds Nopanit, who graduated in environmental architecture in Melbourne, Australia. Potential farmers in these eight provinces will be invited to attend training/coaching sessions on land utilisation and crop optimisation. Participants' progress will be closely monitored as they put the newly acquired farming strategies and techniques into practice. Seventy farms will later be chosen to become the founding class of the “Plook Proh Suk” Agricultural Learning Centres. Each centre will then contribute towards the sharing and dissemination of knowledge with neighbouring farms, with the aim of reaching 700 participants during the second year and 7,000 by the third year.

“I come from a farming family and wanted to make the career of agriculturist more progressive and sustainable. That’s why I chose to study at Khon Kaen University’s Faculty of Agriculture. Fate led me to His Majesty the late King. I worked at the Chai Pattana Foundation for eight years and collected knowledge while absorbing the King’s guidance on development,” says Preecha “Kaek” Ngoksimma.

“That led me to set up a learning centre where people interested in the royal projects can learn about the new theory and sufficiency economy philosophy. I’m delighted to have the chance to share my knowledge and experience with Mitr Phol’s sugar cane growers.” Preecha adds that there are many easy ways to make farming more sustainable under the King’s new theory.

“First, it’s important to know about water for crops and animal husbandry. In the new theory, we must get by with sufficient water so we need to provide or manage a water source for our land by digging a water catchment or groundwater well. Second, we must think of the food we will grow or raise. If we like to eat vegetables, we plant them. If we would like to eat chicken or eggs, we feed chicken, or even fish. After that, we start to plant perennials for shade. It goes along with His Majesty’s concept of ‘Three Forest, Four Benefits’ which features food and medicine from herbs.”

Under the concept, forests should be divided into three parts to grow timber, fruits and firewood. The fourth benefit is the by-product of the Three Forests –the conservation of soil and watersheds.

“I’ve allocated part of my land portion to be a learning source so that people can come to study the basics of the new theory. The second step is to transform agricultural products through science. I’ve already turned many of my agricultural products from the ‘Three Forest, Four Benefits’ concept into cosmetics and I export these. I also run workshops in soap and shampoo making.

“And I’ve also joined with the community to create a bank for trees, which will provide a pension for farmers. I started growing perennial plants when I was in my early 20s. By the time I reach 60, the trees will be 40 years old. A Yang or Gurjan tree is currently priced at Bt40,000 and I have 500 trees covering more than 40 species, including Burmese Padauk and Siamese Neem.”

Preecha is doing well from his personal care products, exporting his bergamot, butterfly pea, boraphet and charcoal shampoos and lemongrass-scented shower gel to a spa business in Hong Kong. “My wife is working on a way to produce hair transplant serum and body serum,” he says.

Thidarat “Dao” Talupnil is the perfect model of an agriculturist using the new theory. “I love growing plants and my family now eat home-grown and pesticide-free vegetables. I practise sufficiency farming and that gives me more time to spend with my family. I used to grow sugar cane but was constantly affected by factors beyond my control like price. One day, I was invited by an official of Mitr Phol Group’s community development programme to try sufficiency agriculture using the new theory.

“But what really inspired me to grow vegetables was my mother’s health. She’s been so much better since she’s only eaten pesticide-free vegetables. And when I have a surplus, I share them with my relatives and also sell them. I’ve allocated my two-rai of land to practise agriculture based on the new theory,” says Thidarat.

In addition to supporting agricultural development, Mitr Phol Group also intends to have a positive impact on the lives of city-dwellers through its “Plook Proh Suk” e-Book, an easy-to-read guide that weaves lessons from the sufficiency economy philosophy and the new theory of agriculture into daily urban life.