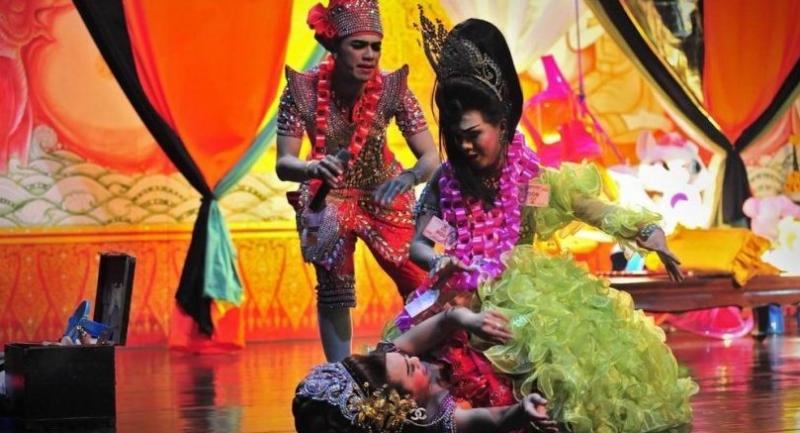 At Chang Theatre, audiences could simultaneously watch male performers put on costumes and make-up and their cross-gender likay performance.

Another event held a few days before underscored the veracity of his statement: a public talk on how to apply for Asian Cultural Council grants, by former grantees – two members of Pichet Klunchun Dance Company in addition to Cambodian and Japanese artists.

There’s some confusion in the programming though. Advertised for Sunday was “Transman”, a new lecture-performance from an account of a transgender audience improvised into a performance by transgender performing artists. I received a call from a theatre critic colleague an hour before curtain time, who had learned on arrival at the venue that “Transman” had been replaced by a work from the repertoire of the likay troupe. “We’re staying anyway: we’ve come this far [across the city],” he said.

“I can’t remember the last time I watched an actual likay performance and never by an all-male troupe like this, so let’s have fun with it,” I replied.

The two-hour-20-minute performance of “Rak Utalut” (literally, “Love in Mayhem”) – according to the photos the troupe performed another play the previous evening – narrated a simple romantic drama about a family who made a good living out of loan sharking. The elder son was an alcoholic who couldn’t do anything right, while the younger was returning home from his studies in the US and the family and the latter’s fiancee were throwing a party to welcome him. Meanwhile, the father was out collecting a debt in a suburb when he saved a young woman from a thug and invited her to live with the family, much to the discontent of the mother. She became pregnant and the last scene brought all characters together onstage to give a surprising resolution to the play.

Apart from showcasing the dancing, singing and acting skills of the individual performers, the thoroughly entertaining show reminded us that the joy of watching a likay performance also lies in environment of this unique theatregoing experience. The most notable, of course, is the tradition of mae yok, or female patrons, without whose support likay couldn’t survive. At the Chang Theatre, bank note clipped garlands were available for any member of the audience to show his or her appreciation to a certain performer. Seeing the youngest audience member, Pichet’s daughter herself, waiting patiently for a long time at the edge of the stage for her favourite performer whose costumes were pink, her favourite colour, to reappear so that she could give him her garland brought smiles to many audience members.

Another heart-warming sight was the mix of die-hard fans of this likay troupe, who came with their own garland with more bank notes, and followers of Pichet’s company in the audience, some of whom were reluctant to add to the garland.

Improvisation was aplenty and entertainment levels reached their peak in moments that were clearly unscripted and unrehearsed. The fact that we could always see performers put on cross-gender costumes and apply make-up and wigs in full view on the two sides of the stage reminded us of the troupe’s outstanding characteristic, which was also worked into many jokes. To push the bar even further in this queer capital of Asia, I wonder how it would be if they portrayed LGBT characters in the performance instead of straight males and females. Pichet, the recipient of the John D Rockefeller 3rd Award, reappeared after the curtain call and shared his ideas on how his company could work further with the likay troupe. He also noted that anyone who wanted to hire the troupe to perform at any events should contact Chang Theatre.

While we’re waiting for the lecture-performance “Transman” soon at another art space Chang Chui, we’re also looking forward to this collaboration between the two dance companies whose creativity is never bound by artistic rules.

With its highly improvisational nature, it’s difficult to put English-language surtitles on a likay performance– a notable exception being works by Pradit Prasartthong and his Anatta Theatre Troupe. Still, a few foreign audience members were spotted having fun in the Chang Theatre that evening, among them my theatregoing companion who’s an expert in traditional Taiwanese opera. After hearing a brief synopsis of the play through my intermittent whisper, the Taipei National University of the Arts (TNUA) professor shared with me his observation on likay’s similarities to traditional Taiwanese opera.