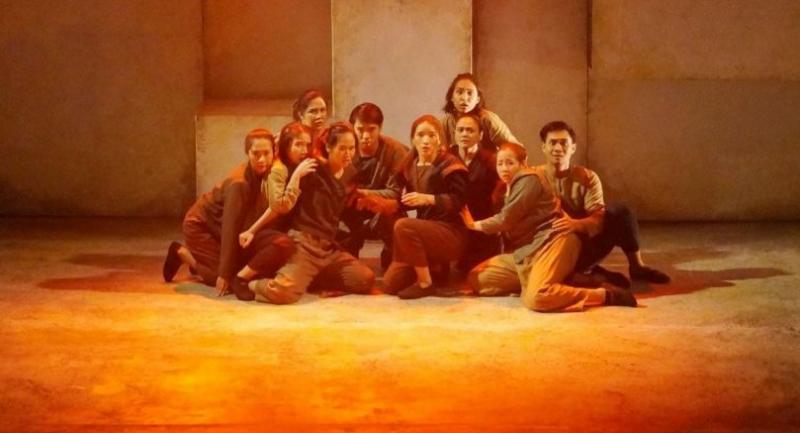 Bangkok Art and Culture Centre’s (BACC) fourth floor studio, the main venue for its ongoing sixth annual Performative Art Festival (PAF#6), is once again opening doors and lending its support not only to professional dance and theatre groups but also less seasoned performers. Veteran director and dean of the faculty Parichat Jungwiwattanaporn pulled together four family history narratives that proved how contemporary Thai society is more multiracial and multicultural than we realise, with sociocultural links not only with neighbouring countries but also China and Indonesia. While the work sounded like a research presentation at times and occasionally looked overstaged due to the frequent accompaniment of videos and still images, “The Voyage” still delivered its point and both entertained and engaged the audience.

It made me think back to my university days when most of my classmates were choosing to major in French, German, Spanish and Japanese and ignoring Mandarin. Today the opposite is true, though many of my students are shunning Southeast Asian languages that the government is trying to promote. Going back another decade, I still recall how some Thai-Chinese classmates tried to hide the fact that they had to miss classes on Chinese New Year Day, which is now, though not officially, almost a public holiday. And when a French friend asked me to take him to Chinatown for Chinese food, I replied, “No, we don’t have to go there: just tell me what you’d like to have – we can have wonton soup at many Thai restaurants.” While many other drama departments shun collaboration with professional artists by focusing more on their research and theories they believe in, Thammasat University’s continues to do the opposite, which was also evidenced in their annual production “Typhoon” a few years ago. It also makes sure that academia is linked with the real professional world and that their students can make a smooth transfer after graduation. Here, Silpathorn artist and B-Floor Theatre’s coartistic director Jarunun “Jaa” Phantachat and B-Floor member Wasu Wanlayangkoon lent their choreography to the physical movements, which student performers could handle without difficulty while seasoned actress Farida Jiraphan blended well with the 10-member cast.

Ending its run last night at the same venue was the revival of B-Floor Theatre’s “Ceci n’es pas la politique” (“This is not politics”) written by Pattareeya Puapongsakorn, which was awarded best original script by the International Association of Theatre Critics (IATC) Thailand chapter in 2015. Jaa didn’t simply restage this production but deftly revived it with significant changes so as to more clearly convey the main message to the audience. In the original production, the audience watched allegorical play “Chitra’s Death and the Disappearing Dogs”, in which six relatives, friends and employees of the late millionaire Chitra are all suspects in her murder for different motives. The play paused at times and the audience was asked to vote on questions both directly and indirectly relevant to the play and as a result some characters were taken off the stage while the play continued. In this revival, Jaa went further and had the lighting designer and surtitle operator removed as well, in part thanks to our votes, and as a result, our perception of the play was more highly affected. The performance was in Thai and English with slightly different cast members, from B-Floor Theatre and other theatre groups, on alternate evenings. As I watched the Thai version last year, I chose to watch the English one this time, also inviting two Singaporean friends to come along. While all of us had a good theatre-going evening, one Singaporean theatre-goer wondered, interestingly, whether the Thai version would be more fun. The number of English-speaking stage works performed by nonnative speakers here has reached an alltime high. In this play, some cast members, like B-Floor Theatre’s Sasapin Siriwanij, were more comfortable with their second language, English, than the others, though all cast members were well united in their frequent physical movements, evidence of ample rehearsal time together.

The two visitors, who earlier that day enjoyed the automated immigration lane at our airport, were also somewhat confused when all of a sudden the lighting didn’t change and we voted without knowing what we actually voted for. After a whispered explanation, their fun continued. This was probably because the director failed to clearly introduce the lighting designer and the surtitles operator by the beginning and only diehard fans would recognise them when they were taken from their booth in the back of the audience. Another major change was the production design. Instead of simple lines on the floor, the play featured the structure of a house with many rooms, which allowed the lighting designer, when he was still working at his booth, to play with light and shadows.

And in the end, the audience was reminded, again and more effectively now than in 2015, that in this supposedly democratic country where everyone has the right to cast their votes, all too frequently these don’t count – or are not counted properly. Also that occasionally we vote blindly without putting much thought into it, simply to exercise our right.

It also brought to mind the political turmoil we’ve been through over the years and how a number of people simply disappear – and we are not talking about those with a residence overseas and a spare foreign passport. In any case, and notwithstanding the efficiency of traditional and social media we have, we never learn the truth.

The fest rolls along!

- BACC’s “PAF#6” continues until December though at a much quieter pace this month.

- Next up is “Asiatopia: Performance workshop, public lecture and performance by Bartolome Ferrando” from October 17 to 19. Soon afterwards is Bangkok Theatre Festival 2017, the largest and most international ever in its 16-year history, from November 2 to 19.