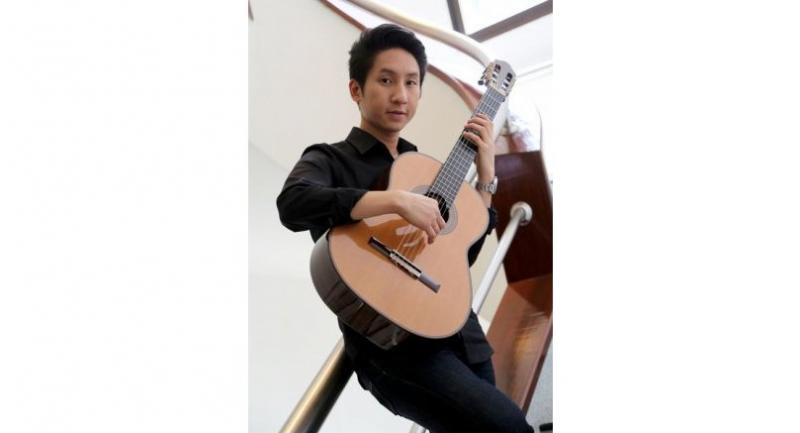 Ekachai “Bird Jearakul is pursuing his goal of becoming a guitar soloist with one of the world’s leading orchestras.

Musical prodigy Ekachai “Bird” Jearakul has achieved a great deal in his short career. The young Ubon Ratchathani native picked up the top prize at the Guitar Foundation of America International Concert Artist Competition in 2014 and followed up with a 50-date tour of the US in 2016. Now he’s working hard to pursue his dearest dream – becoming a guitar soloist with one of the world’s leading orchestras.

“I know I can do it,” he tells XP. “I gained a lot of experience, valuable knowledge, and insights while I was on tour. I’d always dreamed of performing around the world but I must admit that having to manage everything from travelling to performing on my own wasn’t easy,” continues the 30-year-old classical guitarist, who is particularly fond of Spanish composer Joaquin Rodrigo’s “Concierto de Aranjuez”. “I would like to take the next step up in my career by becoming a soloist with a big-name orchestra such as the LA Philharmonic, the New York Philharmonic Orchestra or perhaps the London or Berlin Philharmonics. Being a GFA champion does make you known in the guitar circle, but not as widely as a pianist or a violinist. I would like to be like Lang Lang, the popular Chinese concert pianist who has performed with leading orchestras in Europe and the United States,” he says.

“It is hard for a classical guitarist to perform with an orchestra, and I guess that I’m not the first to set this as my goal. You need not just talent but a good manager too. I contacted John Williams who composed for ‘Star Wars’ but he turned me down because he has too busy a schedule. But I really would like to perform in front of a bigger audience.”

As he continues his efforts to land on the world stage, Bird Ekachai is working on two projects that will pay tribute to His Majesty the late King Bhumibol Adulyadej with the support of his long-time sponsors Thai Beverage. The first is a four-compact disc box set with a booklet that incorporates the complete collection of His Majesty the late King’s 48 compositions, and the second is a free concert, “Still on My Mind”, which is being staged tonight at the Aksara King Power Theatre.

The 48 songs have been rearranged by 10 wellknown classical guitarists, Ekachai among them, to match different styles of guitar playing and were recorded at a studio in Canada.

“All the royal songs should have a variety of ideas and interpretations. I selected nine classical guitarists for their characteristic works and experiences. They are played in classical, jazz and pop versions,” he reveals, adding that 10,000 copies of the box set will be released and priced at Bt999. “I like Da Endorphine and think that her low-pitched and powerful voice goes well with the classical guitar on ‘Saeng Duean’ (‘Magic Beams’) and ‘Oh I Say’. The Suanplu Chorus will sing with me in ‘Saeng Thian’ (‘Candlelight Blues’), which is a choral version with guitar and violin. The GFA guitar trio will join me in performing four songs: ‘March Raja Wanlop’ (‘Royal Guards March’), ‘Klai Kangwon’ (‘When’), ‘Yam Yen’ (‘Love at Sundown’) and ‘Nature Waltz’. Keng Tachaya will sing ‘Kwamfan An Sungsud’ (‘Impossible Dream’) and pianist Pang and saxophonist Nil, two blind students of College of Music, Mahidol University, will perform ‘Smiles’,” he explains.

- Admission for tonight’s concert is free.