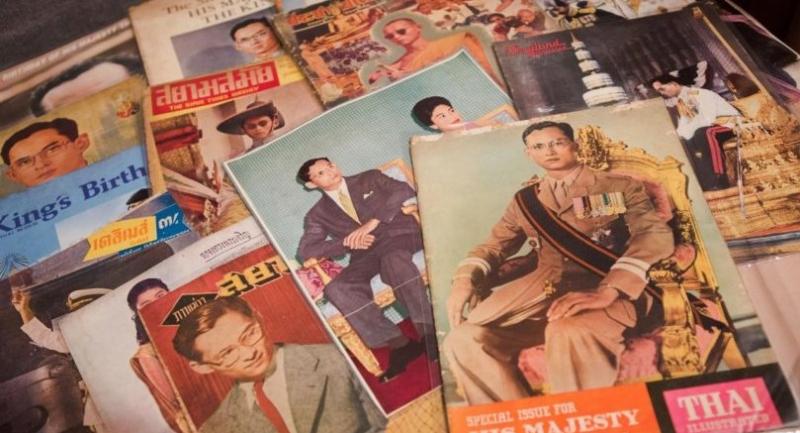 The 2017 edition of Pubat's book expo pays tribute to the late monarch and sees the launch of the association's new image.

Book Expo Thailand 2017 – one of the largest annual book trade events in Thailand – opens today at Queen Sirikit National Convention Centre and, this year, as befitting the year of mourning, celebrates the life of His Majesty the late King Bhumibol Adulyadej.

“We have a new logo and corporate identity this year,” says Suchada Sahasakul, the new president of the Publishers and Booksellers Associations of Thailand (Pubat). “The world is going through major changes and the country has now entered the digital era, Thailand 4.0 as it’s known. To make sure the book business can survive the tough times ahead, we must adopt new ways of thinking as well as technological innovations, bringing a tangible and visible meaning to the world of reading.

“Our new logo represents both the book business and reading. We are also setting up a booth to present our organisation and its aims and hosting a seminar. Visitors will find our information centre next to Thailand Post,” Suchada says.

“Pubat’s new corporate identity is all about friendliness, simplicity and internationalism,” adds graphic designer Wichit Horyingsawad. “The new logo has a modern, geometric design and is both easy to remember and informal. It consists of three circles and three lines. The circles represent to publisher, seller and distributor as the main organisations of Pubat and will be printed on souvenir T-shirts, caps and bags.”

The theme too is unforgettable – “Khwam Song Jam” (“Memory”) in remembrance of His Majesty the late King Bhumibol Adulyadej.

“It is only appropriate that the book circle comes together with readers in mourning the passing of His Majesty the late King. The theme focuses on his books and souvenirs and features an exhibition set out in chronological order that looks at the

late King’s seven decades on the throne, along with royal projects and his books. It is like a timeline of Thailand. For example, the first decade is about His Majesty’s studies overseas and his first literary work, ‘When I Left Siam for Switzerland’, which was published for the first time in 1946. In 1947, the late King granted permission to publish his literary work in the monthly magazine Wong Wannakhadee. In his book, he stated: ‘If the people don’t abandon me, how can I abandon them?’ This rare magazine will be also displayed at the exhibition courtesy of Paisarn Piemmettawat, the managing director of River Books. We have Paisarn’s permission to make copies of magazine and distribute them to people coming to the expo,” says the new Pubat president.

“I found 30 rare magazines at a book stall in Sanam Luang more than 30 years ago, and one of these carried an episode of the late King’s first |

literary work spread over 14 pages together with rare photos,” says Paisarn Piemmettawat, an avid collection of old books and photos with more than 30,000 titles in his personal library.

Several more exhibitions are sharing space with the 939 booths of 389 publishers spread out over an area of 20,000 square metres. They include “9 Soo Sawan Kalai” (“King Rama IX Will Rest in Peace in the Heaven”), a photo exhibition by Baan Phra Arthit Publishing, “Khob Fah Klib Thong … Song Thang Rao Kawee-Cheewit-Ochigny”, which looks at the life of poet Orchigmy, as well as “100 Annual Book and Cover Design 2017” covering the methods of book making.

“It’s difficult to judge from a cover whether a book is fiction or non-fiction. Fiction usually uses more fonts and non-fiction more pictures. We are using the exhibition to showcase the new laminating method through 99 titles. Some of these will later travel to Germany for the Frankfurt Book Fair as well as to Taiwan for the Taipei International Book Exhibition,” says Suluck Visavapattamawon, the Pubat’s vice president.

The book expo also features daily seminars on the topic “9 Days 9 Memories Tha Sathit Nai Jai Thai Nirand” and will be led by former prime minister Chuan Leekpai, Pol Gen Vasit Dejkunchorn and Dr Danai Owattanapanich as well as other new authors. The talks will be held every evening at 6, except for October 25-26, days on which they be replaced with a live telecast of the royal cremation ceremony at Sanam Luang.

Thailand Post, which has been part of the expo for the last decade, is using the event to launch three sets of commemorative stamps on October 25, the first day of the ceremony. The first set features nine portraits of the late King created in pastels by Suvit Tangsombat. The second set has three stamps relating to components of the royal cremation ceremony, namely the Royal Urn, the Palanquin with Three Poles and the Great Victory Chariot, all with a backdrop of Dusit Maha Prasat Throne Hall. The last set “Phra Merumas” shows the Royal Crematorium with a blue sky above it and mourners below.

“The stamp is still a symbol of a country. For Thailand, it is like the national archives, running from 1883, the year the first stamp was released, to the present day. We are displaying 79 sets and 353 stamps honouring the late King at Bangkok General Post Office until the end of this month,” says Wibul Serichaiporn, marketing manager of Thailand Post’s Stamp Service.

“We are also producing a limited edition of a stamp book, titled ‘2493 Phuea Prayot Suk Haeng Maha Chon Chao Siam’ featuring the five longest stamps in the world and three sets of the royal cremation ceremony as well as posters.”