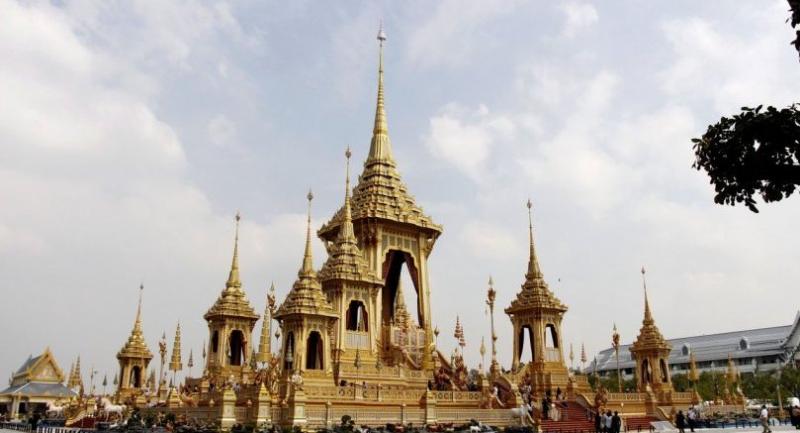 The Royal Cremation ceremonial ground is open to the public and features explanatory exhibitions on the preparation of the royal funeral rites.

TEN DAYS have passed since Thai people bid a final farewell to their late King, His Majesty King Bhumibol Adulyadej, and the gilded Royal Crematorium from which he ascended to his heavenly dwelling is now part of an exhibition open to the public. While the visit is naturally a solemn one, it is also a celebration of the master craftsmen and volunteers whose hard work in recreating a Heaven on Earth over the past year must be seen firsthand to be fully appreciated. The buildings in the ceremonial ground including the Phra Thinang Song Tham (Royal-Merit Making Pavilion), the six Sala Luk Khun and a Thap Kaset (Government Officials’ Pavilions) are all hosting displays of the intricate details of the preparation for the royal funeral rites. Officials of the Fine Arts Department are on hand at every pavilion to provide more details.

Though the structures are conceptual and temporary and will be taken apart never to be used again, they incorporate the ultimate achievements in Thai architecture and art – along with some decidedly modern technology.

About 5,500 visitors are allowed into the ceremonial ground for an hour at a time. Though photography is allowed, selfies and live online broadcasts are forbidden. The model of the Royal Crematorium The process from sketch to construction of the Royal Crematorium is revealed.

The process from sketch to construction is revealed in the next pavilion and it is here the visitor learns that the construction of the Royal Crematorium and 28 component structures covering more than 50 rai, or approximately two thirds of Sanam Luang, materialised from 377 sheets of pencil sketches that were later developed into more than 200 enlarged patterns.

A reproduction of sketches of this Royal Crematorium designed by Kokiart Thongphud is set out on a table along with the process of enlargement of each component to actual size. Also displayed is the painstaking work of the craftsmen using fretwork on gold-coloured crepe cloth, overlapping woodwork as well as coloured stencils to achieve the aesthetic perfection of the temporary architectural components. A display of temporary architectural components used for the Royal Crematorium

“Temporary architectural components are made with materials that are easily manufactured, installed and dismantled such as thin pieces of plywood, plastic and fibreglass-reinforced resin composites. The decorative patterns retain the significance and symbols befitting the sovereign’s rank and status,” says an official of the Fine Arts Department.

Surrounding the Royal Crematorium are more than 500 pieces of sculptural works including the hand-crafted statues of celestial beings like the garuda and the naga, the mythical creatures believed to have existed in the Himmaphan Forest at the base of Mount Sumeru. A showcase of the delicate procedures to create sculptural works

Visitors will be given details on the delicate procedures to sculpt these works and can take a closer look at some sculptures that are identical to those standing around the Royal Crematorium.

“Some sculptures were done in two editions – the ones for decorating the Royal Crematorium and the others to showcase in this exhibition, allowing people to study the details,” says Eakkasit Toratana from the Fine Arts Department. A net of crown flowers crafted by HRH Princess Maha Chakri Sirindhorn to decorate the top of the Royal Funeral Pyre.

Another example of sophisticated fine arts for the ceremony is the elaborate carving of fresh flowers, banana stalks, fruits and vegetables that were used as the natural flame retardant on the Royal Funeral Pyre. HRH Princess Maha Chakri Sirindhorn also crafted a net of crown flowers to decorate the top of the Royal Funeral Pyre and her work is also on display in the exhibition.

“I am so sad to see that the flames from the cremation left a dark stain on some flowers. It was a sharp reminder of the solemn cremation ceremony that saw our beloved King returning to heaven,” said early visitor Kullaya Nitichan with tears in her eyes. Also on display are pictures and details of the Royal Sandalwood Urn and Coffin that took over eight months to complete. Both are made from fragrant dead-standing sandalwood trees taken from Kui Buri National Park in Prachuap Khiri Khan Province. The Royal Sandalwood Coffin features more than 30,000 pieces of hand-carved wood assembled in an exquisite design, featuring 24 patterns of intertwined sprays adorning 132 Garuda. The Royal Sandalwood Urn was assembled from more than 10,000 pieces of carved wood featuring 46 traditional Thai flower patterns adorning 64 Theppanom deities.

The pictures of the meticulously crafted sandalwood flowers presented to the Royal Family members during the actual cremation are also revealed. The replicas of the cremation panels

The replicas of the cremation panels used to shield the Royal Funeral Pyre allow visitors to see the details of the double-sided paintings clearly. On the front at the top of the panels are paintings of an assembly of deities to pay homage to the late monarch while those on the bottom refer to royally initiated projects. On the reverse side is the heavenly abode filled with gorgeous lotuses and flowers in full bloom as well as daffodils – the late King’s favourite flower –and the monarch’s monogram. The life-size fibreglass statues of the late monarch’s two favourite pet dogs, Khun Tongdaeng and Khun Jocho, sculpted to decorate the Royal Funeral Pyre now guard the front of the Phra Thinang Song Tham pavilion. Inside the main pavilion are items associated with his life and works as well as three magnificent murals on canvas depicting projects initiated by the beloved late monarch for the benefit of the country and his people. On display are a replica of his working desk with a desktop computer, a typewriter, cameras, a large map, a two-way handheld radio and stationery. When His Majesty learned of disasters or emergencies, he used radio communications to arrange and monitor the preparation and distribution of bags of emergency supplies to provide immediate relief. The examples of necessities in a bag of emergency supplies are showcased with a soundtrack of the monarch making suggestions to officials to help bring relief to the flood victims. The attached QR code brings up the video clip on YouTube. His Majesty’s New Theory Farming based on sufficiency economy philosophy is translated into 3-D mechanical moving models for easy understanding as well as a display of different kinds of vetiver grass that King Bhumibol introduced for soil and water conservation.

The most touching part of the exhibition is the accumulation of pictures and videos of mourners since his passing on October 13 last year until the Royal Cremation day on October 26. The Thap Kaset pavilion hosts a tactile exhibition designed for the visually impaired. The models of the Royal Crematorium and the landscape of the ceremonial ground as well as the sculptures of celestial beings and mythical creatures are available for touching and come with explanations from the officials and Braille letters.

“Ten eyes can’t be better than touching,” says Wiriya Namsiripongpun, 65, a retired blind lecturer of Thammasat University. “I can hear people explaining the structure of Phra Merumas, but having a chance to touch the model gives me a visual image of the grandeur. By touching, I even know the numbers of steps leading to the three-tiered Phra Merumas. The sculptures of celestial beings and mythical creatures have also been made with delicate details echoing the great efforts of the artists.” “This is a respectful place from where our beloved monarch departed to rest at the heavenly abode, so people should be polite with both respectful attire and manner. With a limited time of one-hour per round, it’s better to use your heart and eyes to record the memory rather than spending much time taking pictures. I’ve seen some visitors touching and leaning against Phra Merumas and behaving in an inappropriate manner when taking pictures,” visitor Arunee Chuboonraj who attended a test run on Wednesday, told The Sunday Nation. During the test run, visitors were permitted a close-up look of the three-tiered Royal Crematorium at the interior second level. Arunee’s comments proved prophetic however, and the Culture Ministry has since banned entry to the interior and the public can now visit only the surroundings.

Officials have also fitted sensors on some items in the exhibition, saying these are a preventive measure to detect if people came in too close a proximity. The Royal Cremation ceremonial ground is open to the public until November 30 from 7am to 10pm. The one-way tour takes about an hour to complete, with only 5,500 visitors allowed at any one time.

Visitors are required to bring ID cards or passports and will have to proceed through one of five screening points. There are four screening points for Thais: the Territorial Defence Command, Tha Chang, the Earth Goddess Statue and Thammasat University, where wheelchairs will be provided, while monks and foreign visitors are invited to check in at the Defence Ministry screening point.

Eight roads adjacent to Sanam Luang will remain closed. Keep updated with the traffic situation at www.TrafficPolice.go.th or call 1197.

The Bangkok Mass Transit Authority will provide 60 free buses a day on six routes from 4am to 11pm. Call 1348.