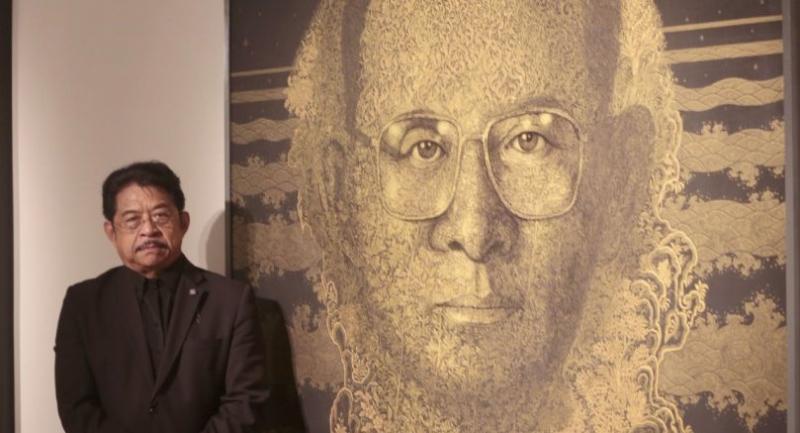 Preecha Thaothong poses next to his painting “Platinum Jubilee Reigning in Suvarnabhumi”.

ON THE NIGHT of October 13 last year, just minutes after the passing of His Majesty King Bhumibol Adulyadej, celebrated artist Preecha Thaothong headed into his studio and worked solidly until the next morning, pouring out his grief as well as his gratitude to the monarch on a two-metre-tall canvas.

“No words could describe this great loss. I was totally shocked when I heard the news. All I could do was to take hold of my brushes and spontaneously express my grief. I painted and cried, cried and painted,” says Preecha.

His feelings that night are revealed in the painting “Explode from Inside” featuring the revered monarch in full regalia and a royal headdress in a sombre grey tone. Since then, he has worked in his studio every day and has so far completed 80 works. These along with other works relating to the late monarch are now part of “Art Project 89/70/4447+ = 9 to 10” – his solo show featuring a collection of 112 paintings, sketches and sculptures spread across three floors of the Queen’s Gallery in Bangkok’s Ratchadamnoen Klang Avenue.

“Most of the artworks are from two distinct periods, the first set dating back to the year 1982 – the bicentennial celebration of Rattanakosin Era, to the day before His Majesty’s passing. The second set of 80 pieces was created after that mournful day. Since October 13, 2016, I have worked every day without planning to hold an exhibition. I just keep putting all my efforts into expressing how much His Majesty did for country throughout his reign through hard work, compassion and understanding,” adds the artist. The show’s title refers to His Majesty’s age at death, 70 years of his reign and 70 years of searching and discovering ways to alleviate the sufferings of the Thai people, as manifested in his royal initiative projects, in all 4,447-plus. The “9 to 10” signifies the passage from the reign of King Rama IX to his son King Rama X.

“His Majesty also initiated 23 working principles such as the sufficiency economy concept, holistic approach, honesty, genuineness, and sincerity. All of these are my inspirations for this exhibition,” he says.

His first painting after the passing of King Bhumibol is also named after one of the monarch’s 23 working principles. “Explode from Inside” refers to the need to ensure clear agreement and understanding of any mission between those working together before solving external problems. The gallery’s first floor houses a large bronze sculpture of the late monarch sitting on the throne with his favourite pet dog Khun Tongdaeng at his feet as well as a sculpture of his book “Mahajanaka”. This is one of nine limited-edition works and the artist has said he will demolish his moulds once the series is complete. The sculpture will go to a charity auction to raise funds for Thai Red Cross while the remaining pieces will be donated to museums.

The portrait sculpture of His Majesty is divided into two parts – young and old. He is seen wearing traditional Thai jongkraben – a lower-body wrap – on the right side of his body while on the left he is wearing Western-style trousers.

“He was both the greatest monarch and a down-to-earth man. As his name Bhumibol means ‘Strength of the Land’, I coated the sculpture with slip - potter’s clay that is thinned and used for coating or decorating ceramics.

“I also sculpted the book ‘Mahajanaka’, which the late King penned about perseverance, to underline that for much of his 70 years on the throne, King Bhumibol travelled to the poorest and most remote corners of his Kingdom, sitting on the ground with farmers and villagers, listening to their problems and responding with more than 4,000 sustainable development projects to better their lives. The book sculpture can be opened and inside are the 110 A4-sized etchings of my paintings that decode the King’s 23 working principles,” Preecha explains. His Majesty brought a modern twist to his literary work “The Story of Mahajanaka”, which is based on the story from the Tripitaka. It recounts the last incarnation of the Buddha as King Mahajanaka, who ruled the kingdom of Mithila, before being born again as Siddhartha. As King Mahajanaka, he valiantly faces challenges and troubles of every kind – from sinking ships to bloody succession feuds – and survives them all through his remarkable perseverance.

In 1996 – the year the Kingdom celebrated the 50th anniversary of His Majesty’s accession to the throne – Preecha was one of eight artists granted permission by King Bhumibol to create illustrations for his book “Mahajanaka”. The project gave him an all-too-rare chance to work with the King in person. “I was in charge of illustrations for chapters 33 to 38. These were the final part of the story, which His Majesty had revised with symbolic twists and thought-provoking messages. Among the eight artists, I probably had a chance to meet the King more often because I had to correct the works 20 times based on his critiques and suggestions.

“He was a true Supreme Artist who had a deep understanding of both arts and Dharma teachings. He was also a genius on both sides of the brain – with an artistic and creative side as strong as his academic and logical side. He suggested that each artist express his own unique signature style by incorporating head, heart and hand to decode his hidden messages in the story,” he recalls. The experience taught Preecha that the heart is equally as important as skill and progressive thinking in creating artwork because it reflects honesty and sincerity in the task being undertaken.

“His Majesty once noted that some of my works conformed to the theoretical approach while adhering to my signature style. His comment reminded me of one of his 23 working principles, which suggests that we should not rely on textbooks but should work in a style that is compliant with nature, environment and community psychology,” says Preecha. Preecha poses next to his painting “Platinum Jubilee Reigning in Suvarnabhumi”

The second and third floors of gallery are occupied with paintings, drawings and sculptures – most of them portraits of King Bhumibol. Deftly rendered, a magnificent royal portrait set against a map of the country signifies that the setting is the King’s office, while several pieces feature his portraits in a golden palette that has been meticulously painted in delicate patterns to resemble a gilded and lacquered texture.

Others employ symbolic meanings. In one painting, a boat is set in the middle of a river to recall the virtues of perseverance and self-reliance as personified by King Mahajanaka, who after his ship flounders and sinks, swims across the ocean for seven days and seven nights even though the shore is not in sight. For the work titled “24/7 Service”, Preecha presents a panel of four paintings depicting different periods of time from dawn, late morning, afternoon to night. Look closely and for long enough and the viewer will see the silhouette of the King from his childhood, through middle-age to old age, with the elderly King sitting in a wheelchair.

“It's like he was looking from the balcony of Siriraj Hospital," says Preecha. “As suggested by the title, His Majesty worked hard throughout his reign to resolve his people’s sufferings. Thousands of royal projects addressing community issues are testament to his devotion.” This exhibition has been put together without sponsors, but using the thoroughly modern technique of crowdfunding.

“Ajarn Preecha didn’t intend to hold an exhibition, but after I had a chance to see his works and learn about his inspirations derived from our beloved King, I volunteered to help arrange the exhibition through crowdsourcing and crowdfunding platforms. This exhibition is not supported by any single organisation, but by all Thai people,” says Sirikul Laukaikul, the exhibition manager. The goal is to reach Bt1.5 million and so far has raised nearly Bt600,000. To join this crowdfuding project, go to Facebook.com/eightynineseventy.

The exhibition photo book in Thai and English can also be reserved for Bt4,900 at the gallery’s shop. Proceeds after deduction of all expenses will be donated to Thai Red Cross and Siriraj hospital.