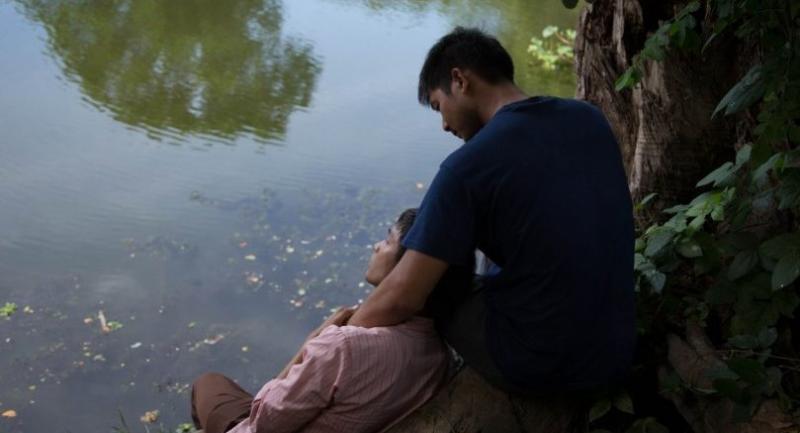 Shane (Sukollawat Kanarot) reconnects with his former lover Pich (Anuchyd Sapanphong) who has returned home and is now terminally ill.

It's been an exciting few months for independent Thai filmmaker Anucha Boonyawatana. First, her new film “Malila” (“The Farewell Flower”) premiered at the Busan International Film Festival in October, winning her the inaugural Kim Ji-seok award, which she shared with Japanese film “The Scythian Lamb”, and her lead actor, Sukollawat Kanarot, the Asian new face award.

A month later, it was screened in competition at the Singapore International Film Festival where it did even better, winning her Best Director award and praise from the head of the jury, British director Shekhar Kapur.

“He is my favourite filmmaker, I’ve seen his film “Elizabeth” several times. And although he’s a foreigner, he truly understood my intention, telling me that having compassion and living with compassion are very different. I don’t really expect people to understand my films, so this was a huge compliment,” she says.

“Malila”, which goes on general release here on Thursday, is a complex movie. The story of the relationship between two men, the first part focuses on life in a Northeast village where Shane (Sukollawat Kanarot) works as a gardener. One day he catches sight of his old friend Pich (Anuchyd Sapanphong), now back home after many years away. Pich is a master of bai sri – a delicate ornament decoration made by folding banana leaves, which is said to nourish the spirit and bring it back home.

Spending time in the secret sanctuary of their childhood, the two slowly reconnect and the audience slowly learns about their past, their relationship and the real reason Pich has returned home – he is terminally ill.

Shane decides to ordain in the hope of bringing blessings and perhaps even improved health to his friend. In the second part of the film, Shane is now a monk and is travelling through the jungle with senior monk Luang Phee (Sumret Muengput), a former soldier who helps guide Shane through his meditative task, overcome his fear and face the truth of life.

While the first part of the film dwells on the beauty of their love and the sadness of separation, the second part is quiet and powerful and reflects Buddhist spirituality in an impressive cinematic way. Since its screening in Busan, the film has travelled on the Asian festival circuit, winning more awards from the Taipei Golden Horse Film Festival and India's International Film Festival of Kerala Both Anucha and Sukollawat are in the running for more prizes, nominated for best new director and best actor respectively at the Asian Film Awards, which will be announced on March 17.

“After all these years, Thai film directors are gaining more recognition internationally. That hasn’t been the case for local actors though, so I am delighted that Sukollawat is doing so well. He’s the first Thai actor ever to be nominated for an Asian Film Award,” says Anucha.

She is also pleased that her film has done so well on the Asian festival circuit but doubts it would have been so popular among more international audiences. “Many of the selections for European film events tend to tackle current world issues like refugees or social ills. ‘Malila’ is a gay romance wrapped in Thai culture and the Buddhist approach to life.

“It’s subtle, personal and reflects aspects of Thai culture that I’m not sure more global audiences would understand. Audiences in Asia like the film because they can relate to it,” she says.

And while the Buddhist element is strong, “Malila” is still very much a gay film with everything an audience expects from the genre but telling the story in a tender, quiet way that allows the visuals to become part of the dialogue.

An important component of the Bai Sri Su Khwan ceremony, the flower arrangement is fragile, and its makers have to fold leaves delicately. It has a short life and when the ceremony is over, the decoration is released into the river. “I used the bai sri as a metaphor for the fragility of man. Mali is the Thai word for jasmine and ‘la’ means farewell,” says Anucha, adding that the movie is also a farewell to her best friend who died of cancer when they were both in their mid 20s.

“As a LGBT, the best friend like her often is more important than parents as we can share everything. Even though I knew she had cancer and she was seriously ill, at that age, I though death was still far away. I was devastated when she died,” says Anucha.

She sees aspects of herself in both Shane and Pich. The idea of introducing bai sai was based on her own experience of making the flower decoration. She has also been ordained and like Shane, walked through the remote jungle.

“After we’d filmed the first part, I started to cry. It was like making this movie helped me see my friend again. But when the shooting was over, I could no longer see her,” she says.

It took years for Anucha to be ready to make the project. “I think it was better to wait and make ‘Malila’ now that I am older. It brings more maturity to the film,” she explains.

But she admits that editing was tough and after more than 18 months on the task, she brought in professional editors Chonlasit Upanigkit and Lee Chatametikool.

“The difficulty was in balancing different things –the beauty of flowers and the swollen corpse, the meditative monkhood and the  sensual love scenes. Too much or little editing could destroy the whole movie,” she says, adding that she took great care to portray the love scenes between Sukollawat and Anuchyd as sensual yet realistic, reflecting their affection for each other while ensuring the audience didn’t feel uncomfortable. “If it is just a beautiful love scene, then it’s too superficial, I have to balance and do it carefully,” she adds.

Today she owns and runs G Village, which works mainly on TV commercials. The company produced both “Onthakan” and “Malila”.