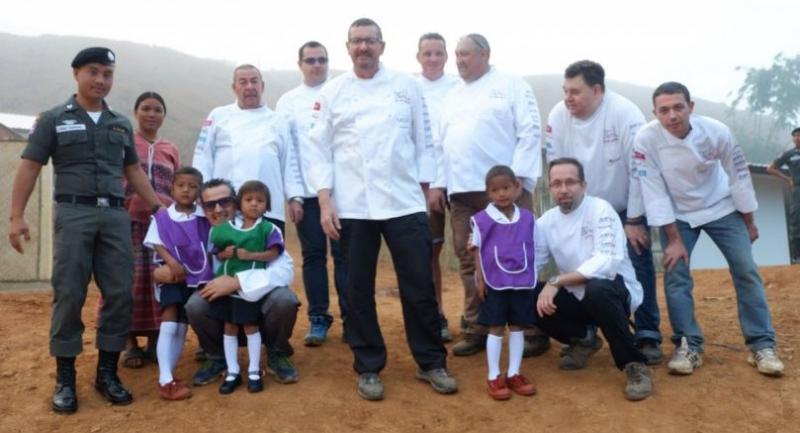 The pros involved in this year’s charity banquet visited the school built with money raised at a previous one. They cooked for students at the Bangkok Chefs Charity Border Patrol Police School.

The Bangkok Chefs Charity coming up next week not only raises money for needy kids, but also trains the future stars of the dining trade

So there was Pojsawat Kang, all of eight years old, helping two of the top chefs in Thailand cook a fancy duck dish. He chopped and peeled the Chinese radish for them, but it was also his job to learn how to prepare the dish. And it was the job of Philippe Guadal of the Landmark Bangkok and Kevin Thomson of the JW Marriott Hotel to show him how it’s done.

Pojsawat is one of 11 young (some very young) “aspiring chefs” getting lessons from the masters participating in the ninth annual Bangkok Chefs Charity coming up on March 3 in the ballroom of the Mandarin Oriental.

Twenty professional chefs are participating this year, not just in preparing the 10-course feast for the gala fund-raiser – which Her Royal Highness Princess Maha Chakri Siridhorn will attend – but also in cooking dinners for underprivileged kids upcountry and training the next generation.

The first Bangkok Chefs Charity was held in 2009 and the organisers had chef Norbert Kostner of the Mandarin Oriental as an adviser to the Royal Projects.

Two years earlier he’d travelled to Chiang Mai to see the Royal Projects on Doi Ang-Kang. Kostner saw more than just exceptional farm produce. There were needy children up and down the northern hills. When he got back, he suggested that the food industry in Bangkok do something to help them.

“We came up with the idea of a charity dinner prepared by famous chefs from the leading hotels,” says Patcharin Hame-ung-gull, managing director of Gourmet One Food Service, which has provided the ingredients since Day 1.

“The idea was to raise money – with no expenses deducted – and give it to Princess Sirindhorn for the Royal Patrol Police schools, for scholarships for underprivileged kids and for buying teaching and sports equipment.

Chef Markus Zuck of the Grand Hyatt Erawan is participating in the project for the third time.

“It’s a fantastic concept and the chefs are passionate about raising money for the kids,” he says. “The event is full of heart – both inside and outside the kitchen. And we get to see the results when it’s all over. We put the money where it’s most needed and you can see the wonderful schools that have been built.”

The main event features a Chef’s Auction. The successful bidders get the chef of their choice cooking them a formal dinner in their home.

But it’s the Young Chefs side-project that seems to produce the biggest smiles. Flanked by a pair of professionals, each aspiring cook tackles a dish his mentors have conceived just for the occasion. It’s a fun evening and there’s a lot of inspiration and encouragement.

After eight-year-old Pojsawat had peeled his radishes and finished his duck, he got to tour the hill communities with the chefs. “I met other children and I was very happy to help cook them kai pa lo [egg and pork in sweet brown sauce] and share toys with them,” he says.

Nitipen Kraivixien, 25, got to assist chefs Antony Scholtmeyer of the Okura Prestige Bangkok and Jan Van Dyk of the Anantara Siam Bangkok in preparing the agasta soup topped with lemon marmalade and crispy ham that will be served at the gala.

With a master’s in cultural heritage studies from University College London – an archaeology course – you’d think Nitipen would be digging up bones instead of making soup stock with them, but she says she’s “a food enthusiast” and had a blast in the kitchen.

“This is a great opportunity to meet world-renowned chefs and learn useful techniques. You get to see how they use their creativity making a dish – for example the way they chose lemon marmalade as a nice contrast in the agasta soup. That’s where the magic happens. Without the marmalade, the soup is bitter from the agasta, but the marmalade completely changes the taste.”

Nitipen says she also feels “truly honoured” to be part of the project helping underprivileged children get a better education.

“And the fact that these top chefs travel to remote villages is another way of broadening the children’s horizons. The kids get to eat really great food and try something new. Who knows – those kids might be inspired to become chef themselves one day!”

PLATES AT THE READY