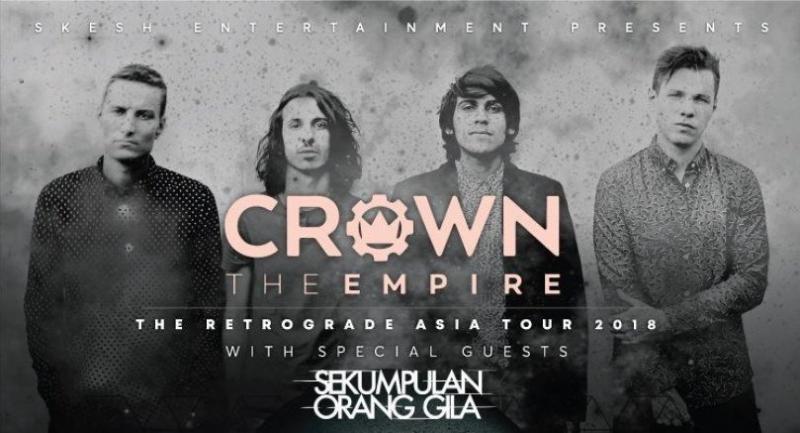 Texan post-hardcore band Crown The Empire will be in Thailand next week for a concert at Rockademy Thailand on May 2.

The rockers, currently on the Asian leg of their “The Retrograde Asia Tour 2018”, are also scheduled to play in Taiwan, Manila, Singapore and Malaysia.

Crown the Empire was formed in July 2010 by Andrew Velasquez, Austin Duncan, Hayden Tree, and Brandon Hoover while at Colleyville Heritage High School with the ultimate goal of “being heavier than most bands in our area”. Former drummer Alex Massey quit the band a new months later and was soon replaced by their current drummer, Brent Taddie.

The band started recording their debut EP, “Limitless”, in 2011 with singles “Voices” and “Wake Me Up” and made their first US tour with A Skylit Drive. In 2012, the band released first single, “Makeshift Chemistry” from their sophomore, “The Fallout”, and followed up with “Memories of a Broken Heart”.

In 2013 the band released “From Death to Destiny” and headlined a tour also featuring Motionless in White and Upon a Burning Body.

In 2015, Crown the Empire released a new single, titled “Prisoners of War” on digital retailers as part of a deluxe reissue of “The Resistance: Rise of the Runaways”, which included “Cross Our Bones”, an alternate version of “Machines” and an acoustic version of “Millennia”. In 2016, Crown The Empire released their third studio album “Retrograde” which debuted at number 15 on the Billboard 200.