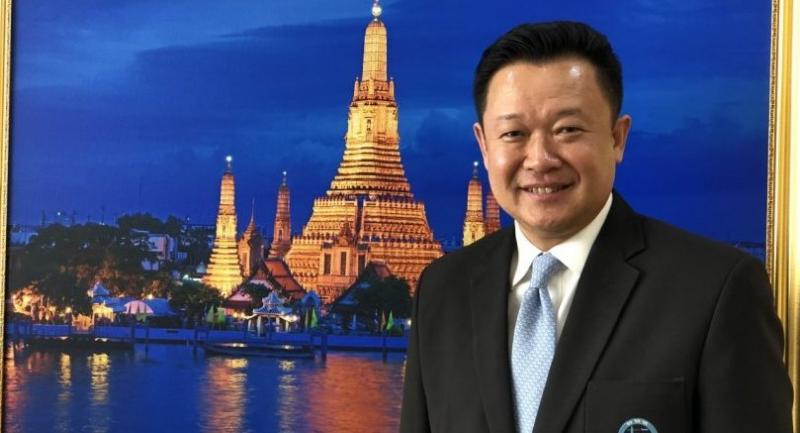 Yuthasak Supasorn, governor of the Tourism Authority of Thailand (TAT)

A PARTNERSHIP between the Thai tourism authorities and Fliggy, the online travel platform of e-commerce giant Alibaba, is aimed at harnessing Big Data to target big-spending Chinese tourists with precision marketing, said Yuthasak Supasorn, governor of the Tourism Authority of Thailand (TAT).

The focus on those Chinese tourists deemed to be of quality and with high purchasing power coincides with a plan to promote as destinations those cities seen as lagging on the second tier of tourism appeal.

The TAT plans to kick off the promotional campaign on Fliggy, a leading Chinese online travel service provider, after June, Yuthasak told The Nation in an interview.

The collaboration is part of the partnership struck between the Thai government and Alibaba last month, when the TAT signed a memorandum of understanding (MoU) with Fliggy to promote Thailand to Chinese tourists and encourage them to spread out beyond the country’s main tourism centres.

He said the TAT would benefit from the partnership, especially with gaining access to the Big Data generated by Fliggy, which will share the information it gathers on Chinese tourists during their stay.

The TAT governor referred to Sesame Credit – a credit-scoring service from Alibaba affiliate Ant Financial - as a means for the tourism agency to access the social credit system in China, providing a database of Chinese tourists. Scores are awarded to Alipay users who opt into the program.

Chinese make up the largest group of visitors to Thailand and, on average, they spend more than other tourists – more than Bt5,000 per person a day, according to Yuthasak. There are three objectives of the collaboration with Fliggy, the TAT chief said.

The first concerns an effort to increase the number of Chinese visitors who are considered to be of quality and have a high spending capacity. The plans to boost inflows into the less-visited cities and for the sharing of data on Chinese tourists and Thailand’s tourism point of interests (POIs) round out the goals.

Yuthasak said the TAT and Fliggy will select three to five cities from 55 second-tier cities designated for promotions.

The TAT early this year launched the “Go Local” campaign, a landmark project to promote 55 of the Kingdom’s emerging secondary destinations.

The aim is to better balance the distribution of tourist arrivals between urban and rural areas, even out the seasonality factor between the months of travel, and encourage more visits during weekdays.

Under the pilot project to start after June, a laggard city in terms of visitors would be selected for promotion on Fliggy, with a range of features including trip planning, booking services and tourist reviews.

With the MoU, the TAT will provide tourism information such as POIs and accommodation choices, tourism services such as spas, local tours and transport options in the chosen city.

Fliggy will put this information into a digital format for Chinese tourists as well as develop features to allow them to design their own trip itineraries under a one-stop-service on the Chinese platform.

Fliggy will share with the TAT all the information the site gleaned from the tourists during their stay.

The capability will allow the TAT to learn more about Chinese tourists, in terms of how much they spend, what products and services they like, and how long they stay and where they do so, along with their activities and their favourite places and the like, Yuthasak said. “We want to know where their money is spent and who benefits from this spending,” he said.

The TAT will use the Big Data shared with it to carry out precision marketing for customised promotion to individual tourists who want to plan their own itineraries rather than go with a group tour, he added.

Some 60 per cent of Chinese tourists travel as individuals, with the rest on group tours.

“The Big Data that we gain will be analysed in order to improve, adjust, and design promotions for specific groups of Chinese tourists,” the TAT chief said.

Under this approach, the TAT wants to see more growth in revenue from Chinese tourists rather than merely an increase in visitor numbers, but the agency wants both metrics to increase, said Yuthasak.

In 2018, the TAT aims to help deliver an increase in spending by Chinese tourist by up to 30 per cent via the partnership with Fliggy, outstripping a previous forecast for 23 per cent growth from last year, when receipts came in at Bt500 billion, he said.

The TAT is sticking with its 2018 target for growth in the number of Chinese tourists to 11 million, against 9.8 million last year. That year they accounted for 30 per cent of the 35.8 million tourist arrivals.

But the TAT governor counters that tourism operators and businesses can gain from the challenges posed by the Chinese operator’s presence.

“We are not forcing them to go on the Fliggy platform, but why don’t the local players see it [the platform] as a door to reach a huge market opportunity,” he said.

“Around 100 million Chinese travel abroad each year, and only about 10 per cent - or around 10 million - visit Thailand. So, we will convince Thai tourism stakeholders to join the platform, through related tourism associations.

“We also caution them on the need to pay attention to industry shifts and seek to improve their services.

“Thai tourism businesses need to adjust and adapt their business to conform with the tourism industry trends. If not Fliggy, then competition can also come from others offering similar platforms, given the trend for online-to-offline purchasing. And why not Fliggy, anyway?” said Yuthasak.

He said the TAT would not unduly favour Alibaba’s Fliggy operation, but the agency is also talking to US-based Internet titan Google and China’s Tencent for potential collaboration to boost Thailand’s tourism industry.

“If we do nothing, our tourism data will still be used by others. But if we partner with the online giants, we will be able to use their Big Data to improve and innovate with the products we offer and with promotions and the like,” Yuthasak said.