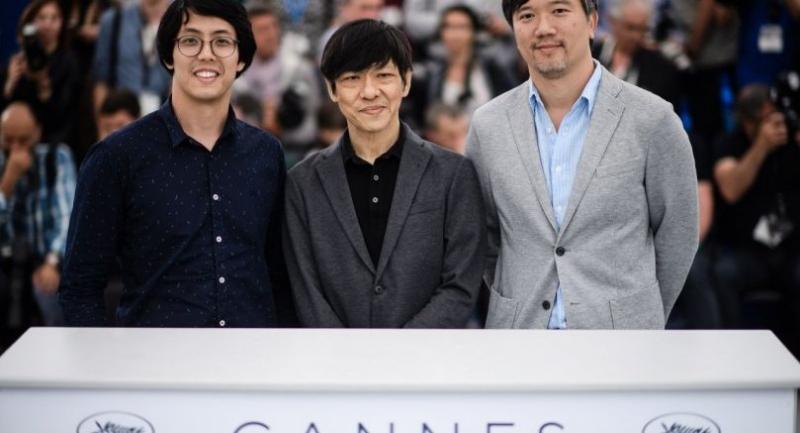 Directors Chulayarnnon Siriphol, Wisit Sasanatieng and Aditya Assarat, from left, pose during the photocall for “10 Years in Thailand” at the 71st annual Cannes Film Festival./EPA-EFE photo

The most prestigious film event in the world, the 71st Cannes Film Festival kicked off last week with a screening schedule of than 60 films, 21 of them competing in the main competition to take home the coveted the Palme d’Or.

This edition – the 71st –is an interesting one for Asian films, with the presentation of new works by masters like Jia Zhang-Ke, Lee Chang Dong and Koreeda Hirokazu in the main competition, while new faces like Ryusuke Hamaguchi, who won a special mention at the Locarno Film Festival for his 2015 film “Happy Hour” is in Cannes for the first time with his latest film “Asako I & II”.

Interestingly, the only Southeast Asian feature film screened in Cannes this year is “Ten Years Thailand”, a cinematic omnibus directed by Apichatpong Weerasethakul, Wisit Sasanatieng, Aditya Assarat and newcomer Chulayarnnon Siriphol. The film, which is being presented out of competition in the Special Screening section, had its world premiere on May 10.

Apichatpong, a previous Palme d’Or winner, is busy with his new art projects and decided not to attend the festival this time, but all the other directors were in to Cannes to attend the screening. Apichatpong's "Song of the City"

“I was asked by [director of photography] Teerawat Rujenatham to make an omnibus film for the project ‘Films For Free’,” says Wisit, who directed the episode “Catopia”. He’s back on the French Riviera for the first time in 17 years, having previously flown in to present his “Tears of the Black Tiger”, which was screened in Un Certain Regard in 2001.

“We wanted to make film about the present situation, but there was no theme. Pen-Ek Ratanaruang was initially also part of the project but later bowed out. Aditya, who knows the Hong Kong team behind the ‘Ten Years’ project, then joined and asked all of us what we thought about doing a ‘Ten Years Thailand’,” says Wisit.

“Ten Years” is a Hong Kong omnibus film made in 2015 by five young directors – Kwok Zune, Wong Fei-pang, Jevons Au, Chow Kwun-Wai and Ng Ka-leung. A dystopian movie, it shows how Hong Kong will look like in the next 10 years under the heavy-handed control of the Beijing government. The film was a major success in Hong Kong and won Best Picture from the 35th Hong Kong Film Awards. Understandably, the mainland Chinese government was not happy with the film and tried to censor it. The original Hong Kong film was also had a limited release in Thailand in 2017, and Golden Scene, the Hong Kong producer, has since exported the concept to Thailand, Japan and Taiwan. “Ten Years Japan” and “Ten Years Taiwan” are set for release in the near future.

“Because the Hong Kong project was so successful, the producers wanted to expand the concept to other Asian countries,” explains Aditya, who has masterminded its Thai version.

“They came to talk to me about it. The original Hong Kong film is about politics, which means that the Thai version will have to touch on politics. Thailand has endured political conflict for the last 10 years, so this is an interesting time to do a project like this. Cattleya Posrijaroen and Soros Sukhum were also involved with a political film project with Apichatpong and Wisit on board, so we just put together our resources.

“And because it’s an omnibus, I wanted to direct one of the segments as well as produce. Being a producer is kind of boring,” says Aditya.

“I missed the original film as it was in cinemas for a very short period,” adds Wisit, who brings his own interpretation of Thailand’s future to the screen.

“According to the producer, the concept is flexible. We don’t have to make films about what will happen in Thailand in the next 10 years but we can also talk about the effects of what is going on now on Thailand’s future.” Wisit’s “Catopia” tells the story of a Thailand run by catmen, who hunt and kill all the humans. The main protagonist could be last human in the world and he has to find ways to survive.

“The film is about witch-hunting, something I experienced myself on the Internet a few years back. Some people were not happy with what I posted on Facebook, and because of that, I lost some friends and was attacked on the social media,” Wisit recalls.

There were supposed to be five episodes of “Ten Years Thailand”, but for reasons unknown, the segment by Chookiat Sakveerakul is yet to be completed. Aditya and Cattleya brought in Chulyarnnon Siriphol, an artist and short filmmaker.

“We need the voice of the younger generation”, says Chulyarnnon.

“I wanted to make a film that reflects the severe censorship in Thai society but not in too straight a way. I use art to convey the idea,” says Chulyarnnon of his “Planetarium”, an experimental piece about scouts trained by the state to bring in citizens who think differently to the Ministry of VHS where they will be cured by strange lights that correct their attitude. “Art or creative media is an important tool to criticise what is going on in Thai society,” Chulyarnnon adds.

Aditya’s episode “Sunset” is a black-and-white film about officers who come to inspect an art gallery to make sure that what’s on show won’t cause conflict in society. “There was a real incident in which an art gallery was inspected by officers, and they took down some of the photos. I saw the photo that they took down, which is just a simple photo of a soldier walking in the art gallery. I found it very powerful so I turned it into the idea for my film,” he says. Aditya.

For “Song of the City”, Apichatpong filmed at the monument to Field Marshall Sarit Thanarat in his native Khon Kaen. Construction is going on all round and the area is packed with people. Some are talking, others sing a traditional Isaan song while yet others are selling a machine that can help you sleep better.

After Cannes, “Ten Years Thailand” will continue its journey on the festival circuit and should be shown in Thailand soon – the best audience to understand the film. The segment directed by Chookiat Sakveerakul may be added to the Thai version of the film.