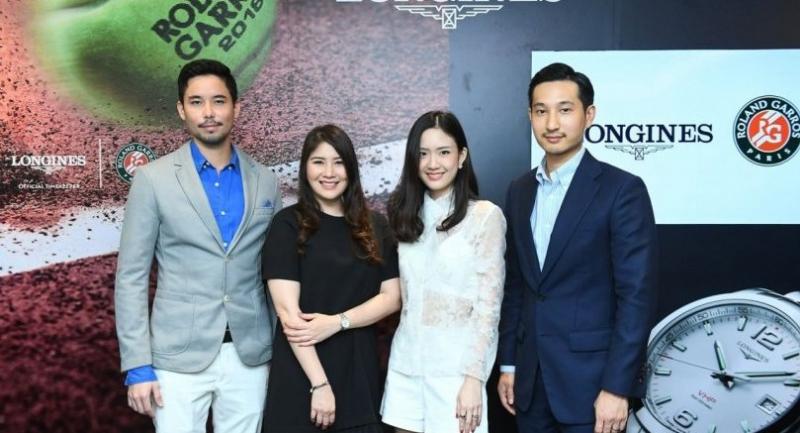 The two were picked by Longines, as part of its “Road To Future Tennis Aces Tournament 2018” or “LFTA 2018”, a special project in which Longines takes Thai youths to enjoy a worldclass tennis experience.

Both will also represent Thailand in a tennis competition with youth representatives from 20 countries and also get to watch matches in the Open, which kicked off on Sunday and runs through June 10.

Longines is marking the occasion with the new Conquest VHP and the special edition Conquest 1/100th Roland Garros to celebrate the longstanding partnership between Longines and the tennis championship.

Speaking at the press conference at 137 Pillars Suites & Residences Bangkok, brand manager Paralee Phetrojana, said: “We are honoured to have partnered with the French Open Tennis Championship  since 2007. This year, to celebrate our 11year partnership, Longines will introduce the new Conquest VHP and the limited edition Conquest 1/100th Roland Garros. The anthracite dial reveals touches of orange on the hands, subtly hinting at the iconic clay of the French Open courts, with a sporty design. Water resistant to 30 metres, the watch is mounted on a stainless steel bracelet with triple safety folding clasp. The case back  is engraved with the logo of Roland Garros.

Salaktip, 12, is excited to be going to Paris. “I never thought I would have a chance to practise with worldfamous coaches and tennis players like Steffi Graf and Andre Agassi. I’m very excited to play there too against other young people and will do my best. I’ve been practised very hard but the tennis court is also a real challenge because it’s clay and we don’t have many tennis courts like this in Thailand.”

Supawat, also 13, can also hardly believe his luck. “I am proud and happy to be part of this programme. I would like to thank Longines for giving Thai youths an opportunity to watch the French Open, as well as meet with famous coaches and players. It took a great effort for me to get here, because each match wasn’t easy. I had to work really hard to become a representative of Thailand at the LFTA 2018.”

Former national tennis player and TATP Tour managing director Danai Udomchoke said, “As a coach, I would say that competitions are very important to tennis players. Each competition is an experience. I am jealous of the youths who get to join the LFTA 2018! I never had opportunities like this when I was young. I am glad to see Longines pay attention to tennis, and I feel that these kids are lucky to have a chance to play on a clay court with representatives from other countries. They can prove that Thai tennis players are great. It’s also amazing for them to meet tennis stars like Alex Corretja, Arantxa Sanchez Vicario, Steffi Graf and Andre Agassi. Each of them is a hero and an idol in tennis.”

Find out more at Facebook.com/LonginesThailand