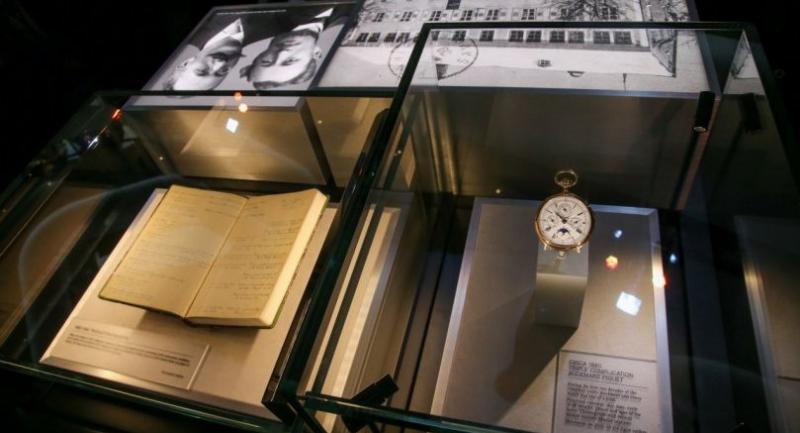 An exhibition at Central Embassy paints a portrait of Audemars Piguet’s history, the founding families, and the Circa 1880 Triple Complication. Also pictured is the handwritten 18821895 Production Register./Nation Photo

Bangkok goes wild for the time this week as three of the world’s best-known watch brands hold major exhibitions in downtown Bangkok.

Central Embassy hosts “From Le Brassus to Bangkok”, a show that looks back at Audemars Piguet’s 143 years of history, while Siam Paragon morphs into a stylish playground for the “Hermes, Time is an Object” exhibition and Swiss brand Blancpain celebrates World Ocean Day with the “Blancpain Ocean Commitment” show, also at Siam Paragon.

Narrating the Swiss brand’s rich heritage for the first time in Southeast Asia, the Audemars Piguet exhibition takes visitors on a journey through the company’s ground-breaking innovations. Also showcased is the brand’s first collaboration with Thai contemporary artist, Arin Rungjang.

Arin conjured up the magic of the brand’s home in the remote and wildly beautiful Vallee de Joux in his photographic installation “Voyage”, combining moving images and lightboxes and setting them to a musical composition that blends natural and horological sounds. The piece’s poetic imagery was inspired by sites in and around Le Brassus and was a fitting introduction to Audermars Piguet, whose museum director Sebastian Vivas has selected 50 timepieces for the show.

Among them are several world firsts and one-of-a-kind models such as an original Triple Complication pocket watch from 1880. An Art Deco timepiece featuring jumping hours with an aperture display from 1930, the original Royal Oak Offshore from 1993, as well as the world’s thinnest self-winding Perpetual Calendar, the Royal Oak RD#2 are also on show.

Est ablished in 1875, the exhibition highlights the main milestones of this epic watchmaking story, while demonstrating the manufacturer’s unwavering loyalty to its core philosophy: “To Break the Rules, You Must First Master Them”. The exhibition is divided into different sections, the first dealing with origins and the founding families. The Vallee de Joux is a ruggedly beautiful region in the Jura Mountains, north of Geneva. Covered with snow for well over a third of the year, the natural resources of the Vallee de Joux –the forests, water, ice and iron-bearing rocks, provide the means for the watch industry to evolve and thrive.

Audemars Piguet has never left the hands of the founding families but passed down the spirit of innovation and independence as well as an immense respect for tradition to their descendants.

The Royal Oak, designed by Gerald Genta, made its debut in 1972 and was the world’s first luxury sports watch made from stainless steel.

“This watch is an icon of watch history. It was inconceivable at that time to craft a watch from stainless steel as they were all supposed to be encased in a precious metal. People were very sceptical and it was not the classic shape. But the identity of the watch is very strong and the price is very high. It has become stronger and more inspiring over years,” Bottinelli explains.

Over the past 46 years, the Royal Oak, Royal Oak Offshore and Royal Oak Concept have been interpreted through hundreds of different models covering all watch categories – sport, classic, complications and women’s watches.

In a laboratory space, the brand historian comments on, handles and reveals the technical secrets of exceptional watches dating from the 19th century through to the most recent innovations such as The Royal Oak Perpetual Calendar RD#2, presented in 2018, which broke the thinness record for a self-winding perpetual calendar movement – a record held by Audemars Piguet for 40 years.

And, of course, there are the special editions created especially for Thailand. In 1950, Audemars Piguet sold to a Bangkok-based customer its very first perpetual calendar wristwatch, model 5516, of which only 12 were produced.

Other special limited-editions include the 2008 Royal Oak Pride of Siam steel-and-pink gold edition. The Royal Oak King of Thailand 80th Birthday watch paid tribute to this major milestone in the late monarch’s life and a one-of-a-kind pink gold model was officially gifted to the King himself.

The second model dedicated to Thailand, the Royal Oak Offshore Pride of Siam, features a sculpted engraving depicting the royal white elephant of Thailand, a sacred animal for which Audemars Piguet had so much admiration that it became the main sponsor of the King’s Cup Elephant Polo Tournament.

“The 100-piece Pride of Siam collection was successful around the world,” Bottinelli says.

One of the oldest Swiss watch brands, Blanpain launched its exhibition “Blancpain Ocean Commitment” by aligning the glamour of luxury with the underwater world.

Taking place at Siam Paragon’s Crystal Court, the extensive exhibition by Blancpain is being held in collaboration with local distributor Pendullum and features more than 20 underwater images by world-renowned photographer Imran Ahmad in “Art in Ocean”.

Fifty Fathoms watches originated more than 65 years ago and the vintage models are on display along with the latest model launched at Baselworld 2018.

Blancpain’s historical connection with the oceans dates back many years with the development of the first modern diving watch, the Fifty Fathoms. This new iconic timepiece has served as the model of standardised diving watches from the past to the present especially with the world’s first function of elapsed time-tracking in diving watches. In addition, Blancpain has committed and raised awareness to protect and preserve marine resources around the world.

“Birth of a Legend” presents the brand’s story and its creation while “Ocean Exploration” allows visitors to learn about the projects supported by Blancpain such as Pristine Seas and Gombessa, which research, study and protect the world’s oceans.

The French high-end fashion house continues to pursue its watch expertise through a truly stylish interpretation. The exhibition “Hermes, Time is an Object” sets out to draw attention to the brand in a way that is both interesting and a whole lot of fun.

Housed in a playground setting and with a “Let’s Play” attitude, the opening last Wednesday at Siam Paragon presented an all-new show devised by the London-based company Gandini Juggling.

Mixing up the rules and playfully subverting them, the show saw peculiar characters mingle with the guests. In their hands, apples pirouetted in a ballet of fluid and precise gestures. Gravity is a question for the apples alone, caught in time, every time. By the end of the performance, exactly one hour had passed. Time had slipped away, at the whim of the artists and apples shaping the space.

For Hermes, time is an object born of uncompromising expertise.

“At Hermes, time is freedom. It can be fun, it is beyond fantasy and design imagination, and it is forever. The Hermes watch is a combination of art and creativity,” says Philippe Delhotal, creation and style director, Le Montre Hermes.

The experience continued with disconcerting scenography – monolithic windows in which the watches appeared and disappeared in time with pulsating light. Then came the interactive screens, human sized to better appropriate the forms.

Before these two-way mirrors, silhouettes of the visitors were displayed before slowly vanishing into smoke. Videos and images succeeded each other, stretched and duplicated in the manner of a kaleidoscope.

Several timepieces are on display, among them the new playful version of Cape Cod. It features a rhodium-plated dial, polished to create a mirror-like effect and coated with precious translucent lacquer with a single or double tour Milanese mesh bracelet.

All three exhibitions continue through Sunday.