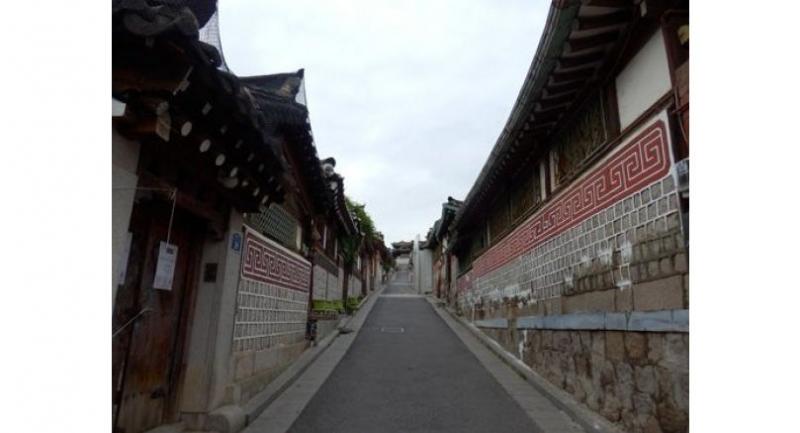 Bukchon Hanok Village is a cluster of homes of classic Korean design.

Since the first Korean wave washed over our shores more than a decade ago, Thai tourists have flocked to South Korea, exploring the filming locations of their favourite series and attending concerts by much-loved K-pop artists.

But the country has much more to offer than venues for hallyu worship including unique cuisine, handson culinary classes, and aesthetic culture. That became obvious on a recent MICE familiarisation trip funded by the Korea Tourism Organisation, whose generosity offered me a wealth of interesting experiences.

Making a good first impression is incredibly important so my first visit is to one of the many hanbok rental shops at Bukchon Hanok Village near Gyeongbokgung Palace where I intend to kit myself out in traditional Korean dress. I choose a blue traditional overcoat, a durumagi with wide sleeves and slip it on over a jeogori, a white traditional jacket, and loose-fitting trousers known as baji before completing the ensemble with a gat, a traditional black hat originally made of horsehair with a wide brim on a bamboo frame.

Clad in hanbok and my sunglasses, I walk the short distance to Gyeongbokgung, the largest of the five grand palaces in Seoul. Its name means “palace greatly blessed by Heaven” and refers to its location in the heart of Seoul surrounded by Mount Bugaksan and Mount Namsan.

Standing at the Gwanghwamun Gate, the first gate of the palace, I’m surprised to see other people, both Korean and foreigners, attired in hanbok. I later learn that it’s “Hanbok Day”, which the Ministry of Culture, Sports and Tourism established to encourage Korean citizens to wear these traditional outfits. I join them to watch the sumunjang, the royal guard changing ceremony, which is held every day at 10am and again at 2pm. Unfortunately I don’t have time to visit the entire palace so limit my excursion to Gangnyeongjeon Hall, the living quarters and resting area for King Taejo, the Geoncheonggung Residence, which was built by King Gojong so he could be politically independent of his father, Heungseon Daewongun, the Geunjeongjeon Hall, the main throne hall, and Gyeonghoeru Pavilion, which was used for entertaining foreign visitors. The hot and humid weather convinces me to divest myself of my hanbok for a tour of the villages of Seochon and Bukchon, whose narrow alleys are lined with traditional hanok houses and it is with relief that I climb into a pedicab run by the Artee Riders Club, the first company to offer rickshaw tours. My pedicab takes me along the road that runs parallel to Gyeongbokgung Palace then turns right into Seochon, an old historic area whose bane means the “village to the west”, which is home to traditional hanok homes as well as many shops, boutiques, cafes and restaurants. Reaching the end of the alley, we retreat to another cluster of traditional hanok homes in Bukchon Hanok Village or “northern village”, an area that is instantly recognisable for its appearance in many dramas including “Monster” and “Heirs”. My driver convinces me to walk uphill along the steep alley from where I can take photos of Seoul from in between the hanoks, most of which have been converted into cultural centres, guesthouses, restaurants and teahouses. Moving from Seoul to Busan for the second part of my journey, I take the opportunity to sample hansik, traditional Korean cuisine centred on rice that has caught on around the world. It includes such familiar dishes as kimchi and bibimbap as well as Korean BBQ and the pop-culture inspired chimaek, which gets its name from chicken and maekju, the Korean word for beer. It is popular all around the country but I try it at Fingers and Chats in trendy Bay 101 of Marine City.

I also take part in Soollo Road, a themed tour that visits the taste and flavour of the city with Korean spirit, or sool, and food. I sample a mini jangeo kkotbap, a type of bibimbap featuring a bowl of rice mixed with grilled eel and assorted vegetables, and makgeolli, the popular Korean rice wine and even learn how to make a Korean beauty mask at Yeonyojae, a school of cultural fermentation.

Bibimbap is one of the all-time favourite meals of the Korean people and well known to most Thais. Its popularity has also grown internationally and it is usually served with a hot-stone bowl. Before eating, I slowly cook the ingredients and crisp the rice before adding gochujang, a popular Korean condiment made with red chillies.

Back in Seoul, I taste the true flavour of my host country at Korea House, a traditional building that introduces the culture and lifestyle of the country’s residents and allows the visitor to experience traditional architecture and a classical atmosphere. It is divided into a space for people to get acquainted with each other, a traditional theatre, and three annex buildings. Normally it’s the setting for historical TV dramas or weddings, but it’s also a hideaway for Korean boy band BTS to expand K-pop’s traditional sphere of influence. Here, I try gujeolpan, one of the pre-eminent dishes of Joseon court cuisine, for the first time. Its name means “a plate with nine sections” – gu is the number nine, representing everything, fullness or perfection. Gujeolpan is characterised by the harmony between the five colours – yellow, white, black, blue and red – created by the natural colours of the ingredients. All the ingredients are designed to be wrapped with a thinly fried pancake made from flour and served with a dipping sauce made from either mustard or soy sauce with vinegar. It’s a popular dish to serve to important guests or at banquets, as it’s colourful and light in taste.

A Korean official of the OME Cooking Lab tells me there’s no better way to learn more about Korean traditional food and desserts than to have a go at making them myself. I opt to make gangjeong, a deep-fried rice puff coated with honey, nuts or seeds, and tteok, Korean rice cakes made of various grains, and bingsu, the shaved ice treat so popular with Thais. Part of the one-day cooking class involves shopping for the ingredients at Yangnyeong and Gyeong dong, two local and traditional markets in Seoul. Fortunately, an OME official is waiting for me at Exit 2 of Jegidong station.

Yangnyeong is the nation’s largest oriental medicine market and I’m immediately struck by the unique fragrances of the Korean medicinal herbs especially several types of ginseng. Red ginseng is particularly popular, due to proven effectiveness in restoring energy, while Youngji mushrooms are known to prevent a range of adult diseases.