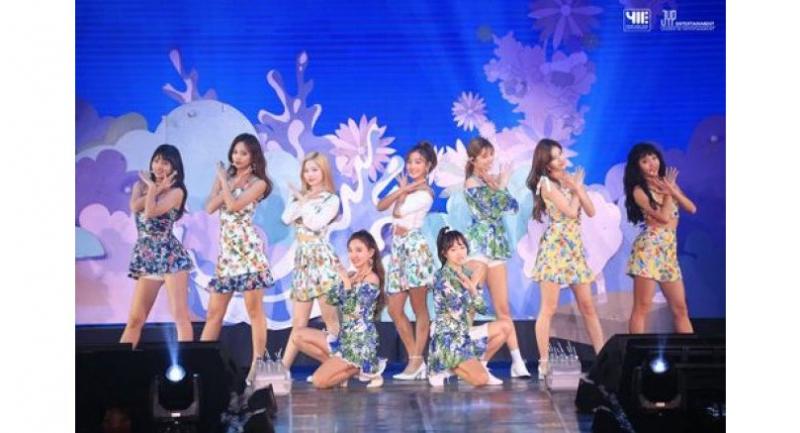 The girl group goes flowery for a song.

It was a definite case of Twice Once more at the Thunder Dome Muang Thong Thani last Saturday night as the well-known girl group from South Korea returned to Thailand to entertain their fans for three full hours only to leave them crying out for more.

Thousands of the Once, the term coined especially to describe fans of the band, turned up at the venue several hours before showtime to shop for various merchandise. One of the most popular items, despite costing Bt1,300 a pop, was the Candy Bong as the band’s official light stick is known.

Plenty of South Korean fans joined local lads and lasses for the show, all of them apparently smitten by the angelic faces of the girls. The “Onces” were keen to return to Twiceland, which first sprang into operation here last year and reopened again on Saturday. The oneyear gap between visits was long but definitely worth the wait as the nine-member band once again pulled off a mesmerising show.

The concert began with a video clip showing the girls from the back dressed in pretty costumes as the audience screamed in the hope of seeing their faces. Nayeon, Jeongyeon, Jihyo, Dahyun, Chaeyong, Sana, Mina, Momo and Tzuyu (the first five are South Koreans, the next three Japanese while the last hails from Taiwan) were quick to oblige, opening the show attired in fluffy white costumes while perched on chairs in mid air that glided up and down as they performed “You Are in My Heart”. Both song and scene looked like a dream, perfectly representing the Twiceland Zone 2 theme – Fantasy Park in Bangkok.

A parade then rolled out on stage as if to bring members of the audience into the Fantasy Park. And there, the nine Twice princesses were waiting for them, transformed into cheerful young ladies in colourful floral/forest prints as they segued into “Ooh-Ahh Ooh-Ahh!” Dahyun has said that this, the band’s first release, is the song that best represents their personality. The fun mood continued with “Ponytail” and “Cheer Up”. Applause grew louder as the girls gathered centre stage to tell the audience “Twice ma laew ka” (“Twice is here”) before breaking into a choreographed set that included “Hold Me Tight”, “Likely” and “”Look At Me”.

After several songs, the band members officially greeted the audience through an interpreter. Jihyo, the band’s leader, was impressed with the many twinkling candy bongs inside the Thunder Dome and praised fans for making concert hall glow so magnificently. Dahyun then asked for applause and screams from the Onces, speaking in Thai much to their delight and telling them “khor siang noi ka” (“Please let us hear your voices”). The fans obliged, filling the auditorium with deafening screams.

The show continued with “Someone Like Me”, “Turtle” and “Stuck”, with the girls walking around the stage and winking at members of the audience. They then disappeared from the stage, replaced by another video clip on the giant screens though this time they were face on to the camera, as if promising yet more magic.

Screams erupted again as Twice stepped out in masculine attire to perform “Touchdown”, “Signal” and “Valenti” and went up another few decibels as Dahyun performed her special Dahyunism, donning a suit and dancing like Rain (Jung jihoon) on “Rainism”. Momo, Tzuyu and Jihyo competed for attention, putting on a sexy dance in Beyonce’s “End of Time”. Jeongyeon and Nayeon duetted on “My Ear’s Candy”, which culminated in an embrace and sent the screammeter to its highest level yet. Sana, Mina and Chaeyong also wove a spell with a cheerful “Oppa” and cute steps before all nine came back together with all-time favourites “Knock Knock”, “Sweet Talker” and “What is Love”. Then it was game time. This involved a clip showing the girls trapped inside a room and the only way out was to recognise a song by its one-second introduction. The Onces had fun with this too, trying to guess the name of the songs along with their favourite singers.

Before long, Twice was back on stage. This time clad in white shirts and very short skirts. They sang “Missing U” and “Only You” as they threw some signed balls into the audience much to the delight of fans, then swung into carefully choreographed versions of “Really Really”, “TT”, “Heart Shaker” and “Dance the Night Away”. Emotions ran high as another clip showed fans waiting to greet the band at the airport and packing into Twice’s first concert in Thailand last year.

And their heroines responded in kind, saying how much they loved their fans and would definitely come back again. Though they mainly spoke via an interpreter, they also managed a little Thai. Nayeon told the crowd, “Once teerak, rak tee sud” (Our beloved Onces, we love you the most”) while Sana said, “Laew jer kan mai na” (“let’s meet again”). As the curtain fell on a truly superb evening, fans couldn’t stop calling out for more. And Twice answered them, performing an uptempo encore.

Hardcore fan Nae walked out of the Thunder Dome with a big grin and a ball signed by Sana in his hand.

“I feel like I’ve hit a jackpot,” he said happily. “I am over the moon. I will definitely revisit Twiceland when it opens again.”