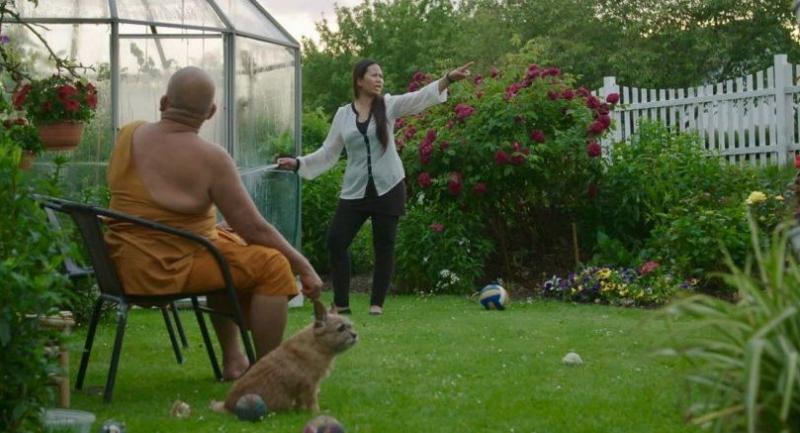 THE TORONTO International Film Festival, one of the world’s largest and most important public film events is also the most varied, bringing films of every genre to eager audiences.

One of its 14 sections, TIFF Docs, focuses on documentaries covering different issues and this year has included Errol Morris’s “American Dharma” about former Trump adviser Steve Bannon and the latest documentary by Michael Moore “Fahrenheit 11/9”, which examines Trump’s triumph in the 2016 presidential election. Another global issue presented through documentaries in this section is migration, as explored in the Danish film “Heartbound”. Directed by Janus Metz and Sine Plambech, it looks at Thai women from the country’s Northeast or Isaan who migrate to Denmark to marry Danish men.

Though the phenomenon known as “Koey Farang” (Western sons-in-law) is widely known in Thailand, few films have touched on this subject. In 2011, Thai director Chinores Kamwandee’s “White Buffalo” told the story of a young man who returns to his village and discovers it has been almost overrun by these koey farang.

Award-winning director Aditya Assarat also has a film project with a similar name. “The White Buffalo”, which is yet to be made, is about an Englishman married to an uneducated bar girl.

And so Metz and Plambach’s “Heartbound” might be the first time for audiences to see the real lives of Thai women who travel far from home to start their new lives with European husbands.

“For 15 years, I have been working with the Thai community in Denmark and in Isaan,” Sine Plambech tells XP after the documentary’s world premiere in Toronto.

A researcher and anthropologist at the Danish Institute for International Studies, she came up with the idea for the documentary project conducting field work with a group Thai women living in a remote area of Denmark.

“As an anthropologist, I was curious why they were here, what they were doing and where they came from in Thailand. I started interviewing them in 2003, and I asked them if I could go to visit their families in Isaan.” With their agreement, Plambach went to their hometowns to learn more about the women who had left their families behind to marry Danish men in a country they knew little about.

“It was my first visit to Thailand. Some of the families picked me up in Korat, and took me in their pick-up truck to a small village in the middle of Isaan. In the village, they showed me the farang houses. It was interesting as it showed how much the villages had changed because of these mixed marriages.”

While it has not been too difficult for these Thai women to blend in with Danish society, the current spread of nationalism and immigrant sentiment all over Europe means that foreign wives could well face prejudice.

“On one hand, the Thai women have been welcomed into the local community and in Danish society and they all have jobs in factories and in the service sector. On the other hand they do face prejudice because they have come to Denmark to create a better life for themselves and their children – and not because they were in love. The love between Thai women and Danish men usually grows as the years progress.”

“I tried to understand how people are navigating the global world. We have new opportunities, but I wanted to know how that was understood at the local level. The marriage between Thai women and Danish men was an intimate place for a conversation about globalisation to begin,” says Janus Metz, co-director of the film who in 2006, was making films about African immigrant in Europe. After meeting Sine, he decided to work with her and help her transform her research on Thai women into a documentary.

“It’s essentially the same story,” he says. “It’s about women who migrate through marriage, but are looking for ways to help their families back home. It’s a fairy-tale type of story. I saw the opportunity to tell this story through a documentary.”

“Heartbound” explores the lives of several Thai women from Isaan who married Danish men and moved to Denmark. Metz and Plambach started filming the documentary in 2006 and it follows the lives of the characters from then until today

One of them, Sommai, moved to Denmark 25 years ago and has become a matchmaker who helps Thai women find Danish husbands.

“Sommai is the main protagonist of the film, and one of the key persons in my research. When I started working on it, everyone was talking about Sommai, telling me I needed to meet her because she was one of the first women to come to that area. I arranged a dinner with all the people. We hit it off and they all agreed to be in the film,” Plambach explains.

“It was also important for Sommai. Over the years, she has taken this on as a kind of political project. She wants to tell her story. The day we had a private screening in Denmark, which the people from the Thai Embassy attended, Sommai gave a speech in Thai to Thai women, telling them that the documentary narrates their real lives, their real stories. It has not been directed, and they should not be ashamed of their lives and how they came to Denmark.”

Kae, Sommai’s niece, is one of the women who came to Denmark to marry Kjeld, a factory worker.

“We met Kae for the first time at Copenhagen airport, and we met her on camera,” says Metz who filmed Kae from the moment she arrived in Denmark until 2016, when her now grown son from a previous marriage who had lived with the couple, moved to Copenhagen to work in a restaurant.

“We tried to talk to Kae through Sommai. She’s in the film because Sommai told her that she has to be in the film,” says Metz. Indeed, it was not the first time that Kae and Kjeld had appeared on screen. Their lives were the subject of a documentary for Danish television back in 2007 called “Love On Delivery” (“From Thailand to Thy”).

“The documentary became very popular with more than one million viewers watching it. After that I continued my research, and seven years later, we decided to go back and film again as there are many dramatic things going on in the lives of these people.”

The film also examines the life of one woman who wants to find a foreign husband but ends up as a sex worker in Pattaya.

“As documentarians, we wanted to look at reality as it is, and not try to make a polished image of the situation. This is the reality of what is going on right now.”, Metz explains.

The world premiere of “Heartbound” was packed to the gills and a hit with the audience. The characters in the film, though unable to come to Toronto, were all excited to see their stories being told to an international audience.

“All the Thai women in Denmark have been texting me asking about the premiere in Toronto. Everyone is very proud to be part of this story. It was too much for them to come to Toronto. Some of them have children, work or bad knees, but Sommai will come with me for the screening of the film in Zurich,” Plambach says.

After Toronto, the film will travel to other festivals, and the directors hope that “Heartbound” will be able to reach Thai filmgoers soon.

“We are negotiating right now with film festivals in Thailand”, says Plambach. “We have been working a little with a local film distributor in Isaan and hope that the film can be screened for the local community.”