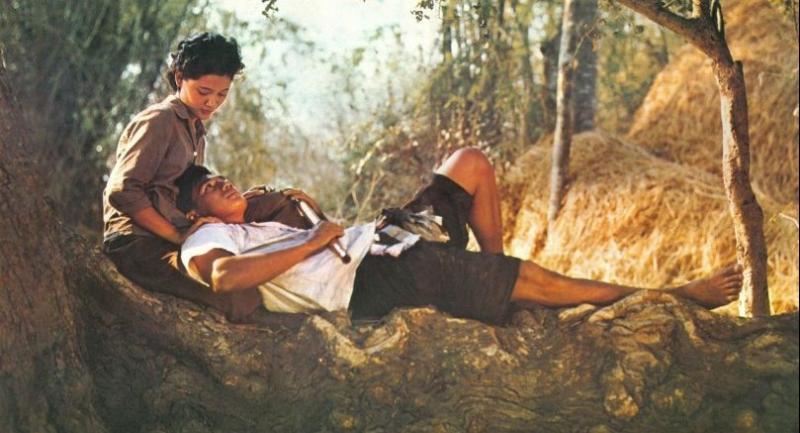 Soraphong Chatree and Nantana Ngaokrachang in 1977’s “Plae Kao” (“The Scar”). The newly restored version will be screened tomorrow night at 8 at Scala Theatre. /Photo courtesy of Thai Film Archive

It has taken more than a year of painstaking work to restore the classic Thai film “Plae Kao” (“The Scar”) but now at last it’s ready. The timing couldn’t be better: Tomorrow marks what would have been the 87th birthday of its director, the late Cherd Songsri, and what better way to celebrate the occasion than to organise a screening at Scala Theatre?

Sanchai Chotirosseranee, deputy director of the Thai Film Archive, which is behind the project, says the success in restoring “Santi Vina”, the first film ever to win an award for Thailand and which was found quite by accident after being missing for 60 years, provided the impetus for “The Scar”. “Santi-Vina”, which was shown at Cannes in 2016, later went on limited release and was well received by the public.

“We saw with ‘Santi-Vina’ that this was a good way to promote and raise recognition of movie restoration and preservation. So we looked at a few potential films that were popular in their heyday and ‘Plae Kao’ was the obvious choice,” Sanchai adds.

“The Scar” was an overwhelming success at the box office when it was released in 1977, earning Bt13 million before being introduced to international audiences. It started its journey on the festival circuit in London, where it was shown alongside the independent film “Prachachon Nok” by veteran director Manop Udomdej, in 1981. It went on to share the Golden Montgolfiere with “They Don’t Wear Black Tie” by Brazilian director Leon Hirszman at the Festival des Trois Continents in Nantes, France, and was voted as one of the world’s 360 classic movies by the Museum of the Moving Images in London, Sight & Sound magazine and film directors and critics in 1998.

It was remade in 2002 in Thailand as “Kwan-Riam” and again under its original name in 2014 starring Chaiyapol Poupart and Davika Hoorne in the lead roles.

Yet despite the relative successes of both these films, Cherd’s original is hailed as the best and most memorable version.

The late director Cherd gave his negative films to the archive 30 years ago. But even with careful storage, the quality deteriorated dramatically with the colours fading to blue when it was reprinted in 2006 for a screening at the “Tout a fait Thai” event in France.

“We check the negative films we have once in a while but restoration can usually wait as we are equipped with cold storage to preserve the film quality,” Sanchai says. Fading and deterioration are common in old negative films but not every movie has to be restored immediately. Sometimes, the experts say, it is better to wait for new technology to come along to make the project feasible.

“The Scar” was on the shortlist for restoration to promote the Thai Film Archive’s work along with other classics including the 1959 version of “Mae Nak Phra Khanong” starring Preeya Rungruang and Mitr Chai Bancha’s most successful film, 1970’s “Monrak Luk Thung”.

However, both films are older and in a much worse state than “The Scar”.

“We even sent them to a specialist laboratory in Italy we used for ‘Santi-Vina’ to restore but the quality is still not good enough,” Sanchai says.

“So we are putting the two movies on hold until someone comes up with the technology that will revive the quality to the level we have been able to achieve with ‘Santi-Vina’ and ‘The Scar’. Moreover, “The Scar” is a more contemporary film and many people over the age of 40 will have seen the original. We are really pleased with the restoration, which has made the film as good as new,” he continues.

Much of the work on “The Scar” has been carried out by L’ Immagine Ritrovata, and this time the archive sent Thai staffers who had attended the Film Restoration Summer School to Bologna.

While the laboratory has the technology required to remove scratches from the film, the colour grading requires several pairs of eyes and from its experience with “Santi-Vina”, the archive realised that the Italian company knew little about the colour temperature of Thai film or the skin tones of different Thai actors. This time, they scanned negative print into digital format, then sent some references to the Italian team to show the colour temperature as well as references of the actor’s skin tone.

These references they provided included scenes from Cherd’s other movies like “Luead Suphan” and a behind-the-scenes segment of the first Thai feature animation “Sud Sakorn” showing actress Nantana Ngaokrachang.

The Thai archive even did some colour grading itself as an example. They also discussed night shots as Thai movies at that time used day-for-night filming, which could also result in the wrong grading tone.

Cherd produced the film with the idea of showing Thai culture to the world. Investors though were not interested and he ended up making the film with his own money and casting relative newcomers, among them rookie actress Nantana Ngaokrachang. The romantic tragedy was also considered a risk as cinemagoers in the late ’70s tended to prefer action movies or comedies. And Cherd also faced difficulties in getting the venues to screen his film as theatre owners feared losing money. He however proved them all wrong and the movie became a big hit.

The film is based on the novel of the same name by Mai Muengderm but adds more detail to the story. It is set in 1936 Bang Kapi, at that time a rural area and home to rice farmers. Kwan (Soraphong Chatree) and Riam (Nantana) are the son and daughter of rival village chiefs. Riam gives in to Kwan’s charms and the two pledge their love for each other at a spirit shrine on an island in the river. Riam’s father disapproves of the relationship. He wants Riam to marry Joi (Settha Sirachaya), the son of a wealthy local nobleman.

Her father then decides to send Riam to Bangkok, where she will be sold into as a maid for Mrs Thongkham (Suphan Buranaphim), a money lender who holds the deed to Riam’s father's land. When the woman sees Riam’s face, she is struck by Riam’s resemblance to her dead daughter. So Riam is adopted by the woman, who introduces her to high-class Bangkok society, including the son of a wealthy nobleman, Somchai (Chalit Fuang-arom). After hearing that her mother is near death, Riam returns to the village for her final days. Kwan comes to bid his last respects, and Riam agrees to meet him the next day at noon, on the spirit island. Kwan does everything he can to prevent Riam from leaving, angering Somchai, Riam’s father and older brother, Roen and leading to the denouement.

After the screening at Scala tomorrow, the movie will travel to the Busan International Film Festival where it will be shown in the new Busan Classic category and introduced by veteran film critic Tony Raynes, the man who selected “The Scar” for the London Film Festival 37 years ago.

It will go on release at Scala and SF World Cinema from October 18.

NEXT UP FROM THE ARCHIVE