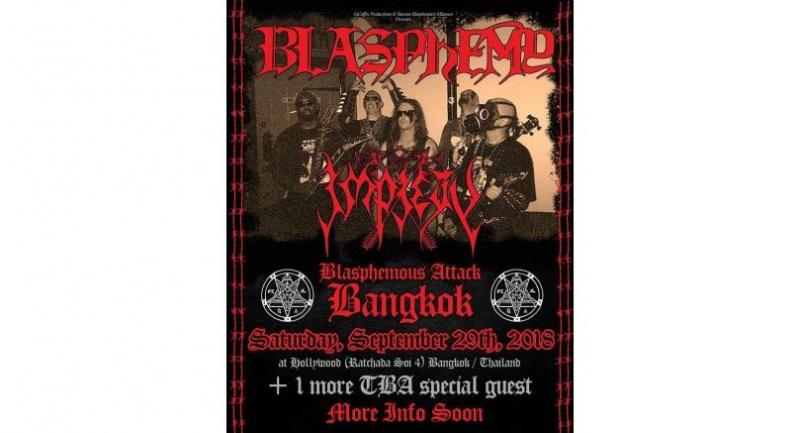 Canadian black metal skinheads Blasphemy jet into Thailand next weekend for a show at Hollywood Ratchada Soi 4 on September 29.

Formed in 1984, the Canadian metal band released a demo titled “Blood Upon the Altar” in 1989 and their debut album, “Fallen Angel of Doom”, the following year through Wild Rags, a record label they had signed to while touring the United States.

Their second full-length studio album was 1993’s “Gods of War” released through Osmose Productions and that same year saw them head off on tour through Europe with Immortal and Rotting Christ.

Blasphemy was then inactive for several years. In 2010, the band headlined the second installation of the Nuclear War Now! festival in Germany.

Blasphemy’s song “War Command” has been covered by Beherit and the cover appeared on Beherit’s 1999 compilation album “Beast of Beherit – Complete Worxxx”. Blasphemy’s “Winds of the Black Gods” was the opening track on the 2004 compilation “Fenriz Presents... The Best of Old-School Black Metal”.

Tickets cost Bt2,000 including free A2 poster at the door.