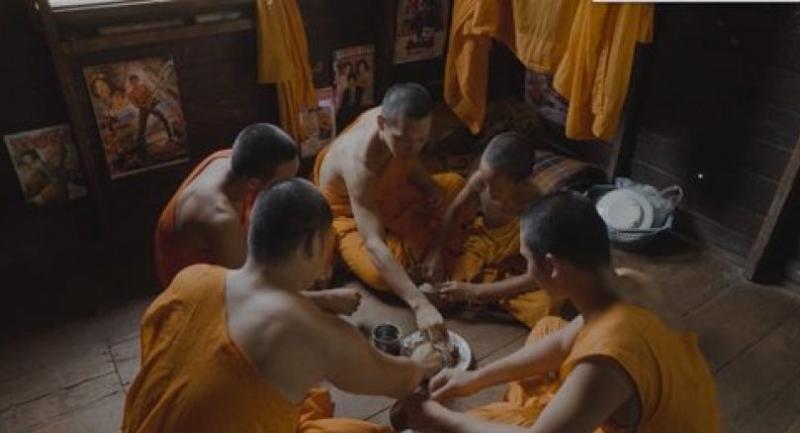 "Nen Kradote Kampaeng" ("The Wall") tells the story of a film director (played by Boonsong) scouting for locations who revisits the temple where he studied as a novice.

Talking with director Boonsong Nakphu about his latest film “Nen Kradote Kampaeng” (“The Wall”), it quickly becomes clear that it is a chronicle of his life as a novice monk.

“But it is not a personal film,” he quickly adds. “The movie has a message I want to share with those who see it and that is about a man who chases his dream for years and hurts his loved ones along the way. It’s painful when looking back,” he says.

“The Wall” is his seventh film and is centred on a stubborn filmmaker (Boonsong) who is scouting for locations for his latest film. He goes back to the places where he lived as a child and a temple where he spent his teenage years as a novice monk. In so doing, he sees the reality of the present, the reality of the past, the dreams and expectations and a mysterious darkness from which he tries to hide. Director Boonsong Nakphu works on the set of "Nen Kradote Kampaeng" ("The Wall"), shooting in the same temple where he spent 10 years as a novice.

Boonsong wrote the story while a student of Dramatic Arts at Chulalongkorn University. He received Bt1 million in funding from the Ministry of Culture but says it was far too little to make a film about novice life.

The script has been changed due to the budget constraints. It originally was what he calls a “period film” about life as a novice monk in the 1980s but later morphed into the story of a stubborn director who finds himself back in his hometown and visiting the temple where he once lived. Memories are told through flashbacks – sneaking out to watch a movie, developing a crush on a local girl – interspersed with the dream that enveloped him during his time at the temple. Even though life as a novice meant he studied dharma and had to adhere to temple rules, he incessantly thought of what lay outside.

“Even though I am not good looking, I would dream of being an actor. Soraphong Chatree was my idol at that time. I tried so hard to get into university so I could learn how to become an actor,” says the director. Like many Thai kids born into poor families, Boonsong was sent into the monkhood so he would have a chance of getting into a higher education facility. And so he left his home in Sukhothai for Phetchabun to study at Wat Praison Sakdaram in Lomsak, where he wore the saffron robe for 10 years.

While he achieved one part of his parents’ dream – a place at a top university – his decision to study acting came as a shock to his family.

“By leaving home and pursuing my dream in Bangkok, I left my mother behind and hurt so many people along the way. And on top of all that, I am still not successful either as a director or actor,” he says.

He has since reunited with his mother, who is now old and unable to walk. She is a regular in his films, appearing in “Wangphikul” (“Village of Hope”) as well as “The Wall” in which his young son plays Boonsong as a child.

After the film had its premiere at the Bangkok Asean Film Festival in July, Boonsong trimmed 20 minutes and reshaped the story, making it leaner and more centred on the message he wants to convey.

“The novice in this movie is just like a real novice. These boys are ordinary people in the saffron robes. There is no religious criticism; it’s just a story about a person who has a dream,” he says.

He adds that the wall in the film can be anything from the physical temple wall that prevents the novice from chasing his dream or an insurmountable barrier that prevents him from seeing other sides of the real world.

The film, he says, is probably the last he will make based on his own life. “I am too old to look back with nostalgia. In the future I will focus on human stories,” says the 50-year-old director.

Boonsong has struggled throughout his filmmaking career and self-produced all of his films, none of which has enjoyed even modest box office success. “The ideal ‘successful filmmaker’ for me means that they make money at the box office and are able to make the stories they want to. I’ve only achieved the second of these goals,” he says.

“Even though money is not a priority, I wish my movies would do well too as this implies that I have an audience. My hope is for my film to be powerful enough to be seen by a wider group rather than a limited community. I’d love to have an audience of more than 10,000 that increases every year.

“I sometimes wonder if I am chasing an empty dream and if I would do better giving up and going home to farm the land I’ve prepared. This uncertainty is reflected in the movie too,” he says.

“The Wall” ended up with a funding shortage that forced him to dip into the family savings set aside for his son.

He supplements his meagre income for his films by working as an actor, lecturing about film at various universities, scriptwriting, and as an acting coach and producer.

With “The Wall” now done and dusted, he will continue with other projects including an anthology of 11 short films with his students at Naresuan University, the story of a teenage girl from the Northeast who pursues a better life by working at a karaoke bar in Bangkok and a tale focusing on Buddhist philosophy.

Boonsong made his directorial debut with “Khon Jone Phoo Yingyai” (“Poor People the Great”) and followed up with “Wangphikul” (“Village of Hope”), based on short stories by noted Thai authors.

His film “Sathanee See Phaak” (“Four Stations”) won a jury prize at last year’s Deauville Asian Film Festival and was also screened at the World Film Festival of Bangkok. His recent films include “Thudongkahwat” (“Wandering”) about a man suffering in life who ordains at a forest temple then goes on a Buddhist pilgrimage and the latest “Mahalai Wua Chon” (“Song from Phatthalung”).

- “The Wall” is now on limited release and showing at House RCA, Bangkok Screening Room and Doc Club Theatre at Warehouse 30.

- A film talk and special screenings of Boonsong’s previous films are being held both at Bangkok Screening Room and Doc Club Theatre.

- Find out more at Facebook.com/PlapenFilmStudio.

Tags:
Boonsong Nakphu The Wall Behind the