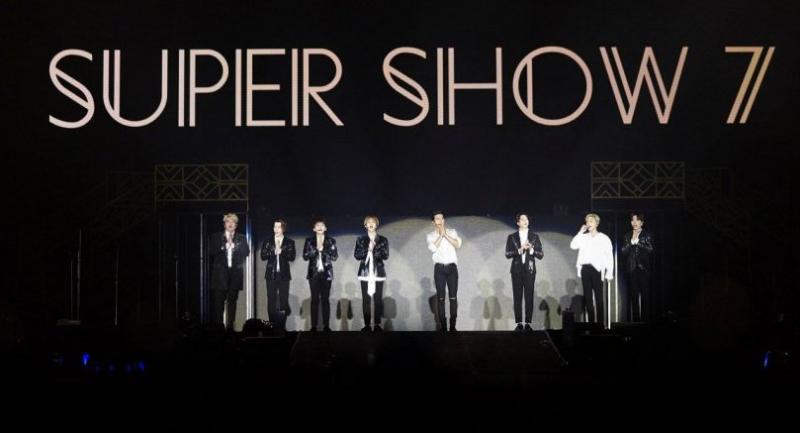 The eight hot guys of Super Junior return to the stage for an encore to their Super Show 7 concert.

The encore came with the special addition of Ryeowook, who missed the original performance early this year because of mandatory military service, and saw many new songs from the band’s latest album being performed.

To thousands of fans inside the packed Impact Challenger Hall 2, the upgraded version of the “Super Junior World Tour Super Show 7” was like a breath of fresh air.

At 5pm sharp, screams reverberated inside the hall as excited fans waited anxiously for the appearance of their favourite artists.

Their screams grew even louder when a clip appeared on giant screens showing a princess-like lady receiving an invitation to a party. Who invited her? The answer, according to the messenger on screen, was that “smart, gentle, precious, sexy, dedicated and well-shaped men would like to meet her”. Super Junior’s fans, almost all of them females, had no problem relating to the lady, who was pictured walking into the party and discovering a series of black suits inside show cabinets. A second later, seven Super Junior members namely Leeteuk, Heechul, Yesung, Shindong, Eunhyuk, Donghae and Siwon appeared on stage standing inside similar cabinets, attired in black suits, and singing the band’s hit tune “Black Suit”. The vibrant mood continued with “Scene Stealer” and “Mamacita”, and went up another notch when with “Mamacita” drawing to an end, the stage lights went out briefly to allow the spotlight to shine on the eighth Super Junior member for this concert – Ryeowook. Although he wasn’t able to perform in the original Super Show 7 concert in January as he had yet to complete his compulsory military service, his performance was so spot on that it seemed like he’d never been away. After performing three songs, the lads officially greeted their fans – known as EverLasting Friends (ELFs) – and tried their best to speak in Thai. Ryeowook, for example, said, “Kid teung phom mai krab? Phom kor kid teung tuk khon na krab” (Do you miss me? I miss you too”). Leetuk wowed the audience with his beautiful “wai” and tried his best to correctly pronounce “Ma sang party hai sanook sanan dee nai krab?” (Isn’t it a good idea to throw a fun party?). But Eunhyuk stole the show by repeatedly playing with fun word, “jakkajee” (“tickle”). The guys then removed their jackets and delivered a cool rendition of “Shirt”, earning even more screams as their neat white shirts became soaked in sweat.

“Animal” and “It’s You” were up next and drew ear-splitting screams as Super Junior blindfolded themselves as they danced.

The artists then performed two songs from their just-released Latin-style album, –“One More Time” and “Lo Siento”. These special additions to the original Super Show 7 raised the excitement level even further and drew loud applause.

Yesung went solo for “Your Echo” then joined his seven pals for “One More Chance”. Ryeowook then took the entire stage for his remarkable rendition of “Little Prince”. Donghae and Eunhyuk ramped up the tempo with an energetic performance of “Bout You”, “Oppa Oppa”, and “Can You Feel It” complete with the much-loved “Chok Chok” dance.

When all eight members returned next to the stage, they were dressed as schoolboys. They talked to the ELFs one more time, sharing their happiness at having brought the show back to Thailand. Shindong told the audience he particularly liked Impact Challenger Hall 2 because everyone sat at the same level before being summoned by the bell to get back to class. Seated on their desks, they delivered “Runaway” and followed up with “Too Many Beautiful Girls”, waving the band’s official colour-changing light sticks alongside their fans. And when they performed the dance tune “Rokuko”, they thrilled the fans right across the hall by scattering all over the stage to get close up with the audience. Super Junior then smoothly disappeared and returned in new outfits for “On and On” and “Super Super”.

The screams rose another few decibels as all eight hunks were raised up high on a rotating part of the stage and the grand disco chandelier moved down for the start of “Sorry Sorry”.

From there, it was non-stop thrills as they sang “Mr Simple” with exciting stage effects and Eunhyuk performed a solo break dance. ELFs were already on Cloud Nine by the time Super Junior concluded this dance session with “Bonamana”.

And the concert was far from over, with the eight returning to the stage for “I Do” and hugging each other. The warm feelings continued with “Shining Star” while the ELFs flashed banners reading, “Thank you for being a shining star for us over the past 13 years. ELF promise to be the sky for SJ forever”.

Yesung told fans in Thai that he was so happy to meet them again and Siwon added “Thailand! You’re so special (in English). I will love you forever (In Thai)”. And taking their cue from the ear-splitting cheers that followed Siwon’s speech, Heechul and Eunhyuk jokingly began their messages with “You are so special”. The large screens again showed the invited lady, this time wondering had (should it be "who had?) who actually invited her to the party as she was just an ordinary girl with music as her only friend. The answer had the ELFs in tears. It turned out that the lady was special because she was an ELF and Super Junior had been with her since she was young.

Super Junior made their debut in 2005 so they really have been part of their fans’ lives for a long time. Like the teens who loved them back then, they have grown-up and are now in their 30s.

The eight members said a musical goodbye to their fans with “Devil” and “Miracle” before taking the centre of stage to bid a proper farewell.

Ryeowook lifted the mood by singing a few lines from the Thai song “Man Kong Pen Kwam Rak” (“It Must Have Been Love”) while Leeteuk made a moving speech about how his band’s love story with ELFs had lasted a long time.

“We may grow older but our love has never changed,” he told the fans.