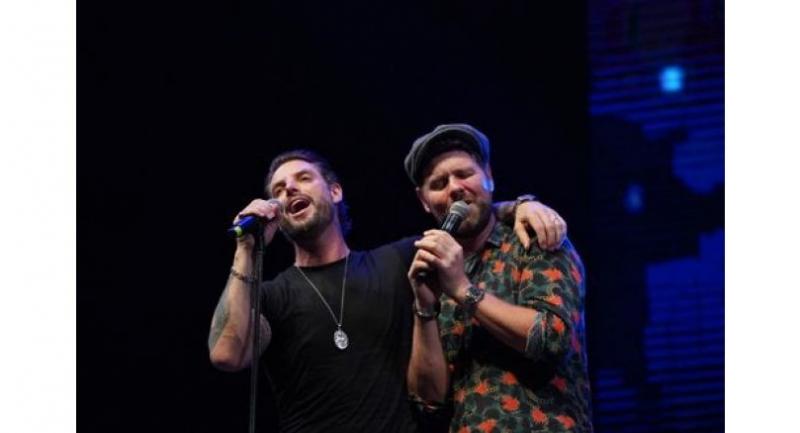 Brian McFadden of Westlife and Keith Duffy of Boyzone, now working as Boyzlife, made a success of their Thailand gig.

Brian McFadden of Westlife and Keith Duffy of Boyzone, now known collectively as Boyzlife, delight the adolescents of yesterday

Thai fans were out en masse last Saturday night eager to travel back to the heyday of two of the best-loved boy bands from the 1990s through Boyzlife’s debut concert in Bangkok at GMM Live House. The freshly minded duo each represent one of those bands of yesteryear – Brian McFadden the “songperson” of Westlife and Keith Duffy that for Boyzone, and together they capably guided the audience back through the years, pausing now and again to crack some jokes. I personally found it strange to listen to those oh-so-familiar songs while looking at only two men on stage and was a little disconcerted to find that the backing tracks had me thinking of music contests like “Britain’s Got Talent” or “The X Factor”.

The concert opened with sets by two Thai artists of the 2000s, Oh Seksan and Pramote Vilepana, both of whom delighted the audience with their old hits and their new numbers. Screams rang out from the fans – most of them adolescents during the Westlife and Boyzone era – as McFadden and Duffy came out on stage and swung into some throwback hits. The pair kicked off with “When You’re Looking Like That” from Westlife’s second album, 2001’s “Coast to Coast” then segued into “Picture of You” from Boyzone’s third album “Where We Belong” in 1997, which became known as the theme song of the film “Bean: The Ultimate Disaster Movie” and led Ronan Keating to win an Ivor Novello Award. “World of Our Own”, as the title track from Westlife’s third album, was next, followed by the cover of The Bee Gees’ “Words” which became Boyzone’s first number one hit in the UK.

After McFadden finished “Swear It Again”, the first single from Westlife’s self-titled debut album and also the best-selling debut single of all-time from an Irish citizen, Duffy made fun of his bandmate Ronan Keating’s Irish accent in “Baby Can I Hold You”. The audience laughed and sang along with him. The audience kept on laughing, as the pair amused the audience with “Mandy”, with Duffy pretending to be a dancing girl and embracing his bandmate. After Cat Stevens’ “Father and Son” covered by Boyzone, the audience let out a big roar and a round of applause as the first few notes of Westlife’s “My Love” were played.

Boyzlife then went romantic, singing Boyzone’s “You Needed Me”, “Love Me for a Reason” and “No Matter What” and Westlife’s “Flying without Wings” before leaving the stage.

Shouts for more echoed around the hall and they were soon back, ending their onehour concert with encores “If I Let You Go”, “When The Going Gets Tough” and “Uptown Girl”.