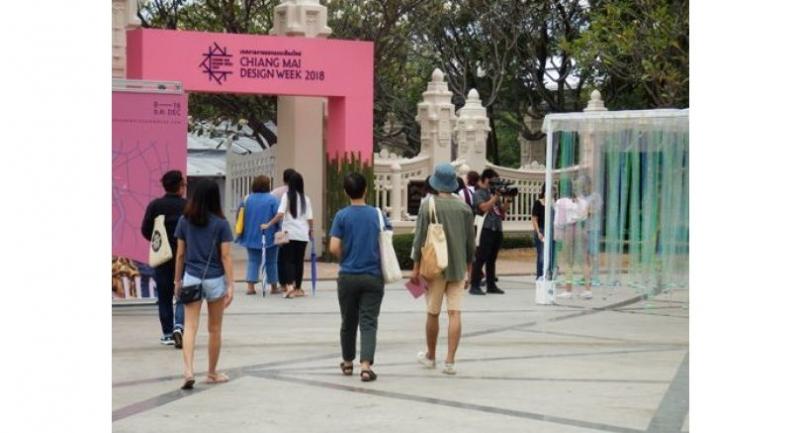 The fourth edition of Chiang Mai Design Week – an annual festival that invites creators from different industries as well as established and upcoming designers, craftsmen, artists and entrepreneurs to present innovations and new projects that respond to modern living – is underway in the Northern capital and this year is bigger and better, with designers from 19 Thai cities and 10 nations taking part. Chiang Mai, long known as a city of art, culture and nature and home to such hilltribes as the Hmong, Karen and Lahu, was one of the 64 cities in 44 countries named as a Unesco Creative City for Crafts and Folk Art back in 2017 and is living up to its designation with projects all over the town including at the Three Kings Monument, Chiang Mai Art and Culture Gallery, Chiang Mai House of  Photography, the Community of Chiang Mai Temple and Lam Chang Temple, and the Chiang Mai Design Centre. This year’s theme is “Keep Refining” and reflects the firm belief that apart from enhancing our quality of life and presenting innovations, continually refining and developing manufacturing processes and techniques in crucial to progress. Together, say the organisers, these elements contribute to taking design works to the next level: sharp, up-to-date and corresponding to needs in our daily lives, as well as paving the way for the future. Chiang Mai Design Week presents no less than 200 activities in seven categories, namely exhibitions, talks, workshops, tours, parties, events and markets. The exhibitions sector features the ideas of manufacturers, designers and creators, craftsmen and organisations and for the first time ever, has also recruited new craftsmen from eight universities around the country. One of the exhibitions, “Invisible Things”, at TCDC, is a co-creation by Germany and other nations and boasts 25 Thai and 25 German objects, all of them so ordinary that they seem insignificant yet reveal a great deal about traditions, history and mentality as well as lifestyles. Curator Piboon Amornjiraporn explains that the exhibition debuted in China before coming here. “The 25 German objects are the same as in China, but for the 25 Thai objects, I worked together with Philip CornwelSmith, author of ‘Very Thai: Everyday Popular Culture’, a Briton who is fascinated by Thai objects. The aim of the Germans is to collaborate with several countries and present objects from daily life that represent each of their cultures. We haven’t selected objects that are invisible per se, but those that reflect Thainess, such as traditional costumes and patterns that appear in our everyday lives. They are different from the German ones, which are mostly ready-made, and show how Thais improvise in using such objects in their lives.” Chiang Mai City Arts & Culture Centre is home to “Landscape of Things”, a design collection that explores new ways of rethinking common archetypes through Northern Thai ceramic objects. Also on show are “Darakorn” by Moonler, which offers an alternative view of furniture designs of timeless simplicity as well as the meticulous skills of local artisans, and Masaya, featuring collections by Zen Stone, Mutation, Lotus Leaf and FIG Chair, which have Mother Nature as their core and inspiration. I am particularly taken by Papitcha “Earth” Thanasomboon’s ceramic works standing on mirrors under the name “Everyday” which are installed in the building’s outdoor space. For her show, she has adopted “nerikomi”, a traditional Japanese ceramic technique that creates patterns in coloured clay. “My name is Earth meaning soil or, in other words, humble,” says Earth, a new graduate of the Faculty of Decorative Arts, Silpakorn University who received the “Outstanding Award” at the National Ceramics Exhibition. “My new collection is based on the same concept of the sky but is wider-reaching. I created my 30 bowls over a month and as I moulded the clay everyday throughout those 30 days, I looked carefully at the changes in the sky and how these affected my emotions. Sometimes, the sky was so beautiful and other times it was so smooth. I was impressed by those differences. I love nature and notice the things surrounding me. People see the sky everyday but don’t observe its beauty. I decided to put my ceramics on top of mirrors after I saw a photographer use this technique. It gives the work greater depth and allows the viewer to see the exterior and the interior simultaneously while underlining the relationship between sky and earth.” Walking towards Chiang Mai House of Photography where textile exhibition “Spirital Crafts” is on display I pass several other projects, among them designer Tawin Na Chiangmai’s “Nong Mommam” inspired by Momm, a mythological animal unique to northern Thailand; “Tone Collection”, which takes its cue from the craft skills found in the 80-year-old Akekarach Village International Drum Trade Zone in Angthong province; Vatsapol Nanta’s sofa “Rak Bua” (lotus root) made of cardboard, and “Yang Yoo Wai”, a bamboo shelter that is designed to cope with life during an emergency situation. “For this textile, I experimented with a new alternative filament –Persian cat hairs. The character of this cat’s fur is similar to sheep’s wool. I wanted to do something with these beautiful hairs, which the cats shed all the time. I offered to buy them from the cattery but the owners gave them to me for free. Wool is a western commodity and comes at high price. The Persian cat hairs aren’t as sticky as the wool. I didn’t think dog hairs would be suitable for the filament then discovered some French breeds that are just right for the job,” Noina explains. When darkness falls, the colour-changing lights of an interactive installation, “The Act of Thought” by Living Spirits come into their own. Located in front of Lanna Folklife Museum, it features a fantastic display of projection mapping on the wall of the Lanna Folklife Museum that tells the story of eight artists’ works focusing on daily life, arts and culture.