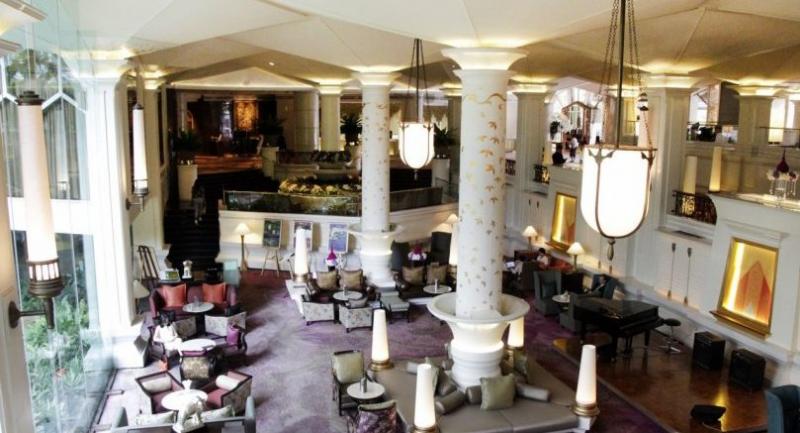 The two-level, spacious lobby is punctuated by large round columns supporting the high ceiling shaped like lotus leaves but does not meet today’s energy-saving requirements.

THE TALLEST building in the Thai capital when it was completed in 1970, Dusit Thani Bangkok will cease operations on January 5, bringing to an end 48 years of hospitality and its position as a landmark of pioneering design.

Although the iconic building will be demolished to make way for a Bt36.7 billion mixed-use project featuring residences, retail areas and office space, as well as Mark II of the hotel, the owner - Thailand-based Dusit International – will keep its legend alive by preserving the hotel’s cultural, artistic and architectural heritage in both concrete and archive forms. Once a Bangkok landmark, Dusit Thani Bangkok will cease operations early next month and the building will be dismantled to make the space for a new mixed-use project.

Dusit International recently signed a Memorandum of Understanding with Silpakorn University for the project “Dusit Thani’s Artistic Heritage”. This will see the preservation and documenting of elements of aesthetic value, ranging from the massive concrete columns adorned with paintings, the Thai-style facades and handcrafted teakwood carvings to the historical ornaments and big trees. These will be preserved for use at the new version of the hotel that is slated for completion in 2023 and located on adjacent land.

“While change is inevitable if the property is to respond to the lifestyles of today, I will try to maintain the hotel’s spirit and heritage as much as possible in both tangible and archive forms. I’m very bound to this hotel and want to maintain my mother’s [founder Thanpuying Chanut Piyaoui] vision of a Thai hotel with international standards that promotes the majesty of Thai culture in harmony with the modern world,” says Chanin Donavanik, vice chairman and chairman of Dusit International’s executive committee. The wood carvings and a collection of personal items belonging to King Rama VI in the Library 1918 Room will be preserved for use at the new hotel.

Experts from different faculties of Silpakorn University will work together on the project. The Faculty of Architecture is not only documenting the hotel’s significant architectural elements in both print and digital platforms, but also creating an intricate 2x1-metre model showcasing all the building’s key elements.

A study of the plant species grown in the hotel’s grounds will also be conducted. The big trees such as Bodhi, banyan and frangipani will be relocated to the new site while other plants will probably move to Lumpini Park on the other side of Rama IV Road.

“The hotel is very unique in that it blends Thai and modern elements, from the Thai-motif facade to the art deco-style elevator and teakwood carving. The high-ceilinged lobby is very spacious and infused with Thai motifs while the garden with its multitude of tropical plants and the waterfall is designed as an oasis in the big city. Napalai Ballroom, once a popular venue for fashion shows, concerts and weddings, was the pioneering concept for today’s Impact Arena and MCC Hall,” says Dr Chaiyasit Dankittikul, dean of the Faculty of Architecture. The beautiful water garden filled with tropical plants serves as an oasis of calm in a chaotic city.

Located at the corner of Silom and Rama IV roads, the 23-storey building with more 500 guestrooms on a triangular terrace tapering slightly towards the top takes inspiration from Wat Arun’s prang. The roof was finished with a spire resembling a chedi, making it an instantly recognisable landmark.

Japanese firm Kanko Kikaku Sekkeisha (KKS) led by architect Yozo Shibata, who designed the Okura Hotel in Tokyo, and Thai Obayashi were in charge of the design and construction of the hotel, which occupies the site of the former Saladaeng Residence of Chao Phraya Yomarat, the interior minister who served King Rama VI, and was later owned by the Crown Property Bureau.

“Instead of constructing the square-shaped building that was ubiquitous in those days, my mother preferred unconventional design infused with Thainess. The hotel’s name was also in Thai in contrast to the popular use of English names. As the location is opposite the statue of King Rama VI at the entrance of Lumpini Park, the name is borrowed from a miniature city built by King Rama VI in 1918 in Phaya Thai Palace to explore the concept of democracy,” says Chanin. The two-level, spacious lobby is punctuated by large round columns supporting the high ceiling shaped like lotus leaves but does not meet today’s energy-saving requirements.

“The two-level, spacious lobby is punctuated by large round columns supporting the ceiling shaped like lotus leaves. Today, we are concerned about energy saving but the building’s triangular-shaped structure and the high ceiling in the lobby are not easy to refurbish or twist to meet new hospitality trends. However, we will try best to bring the memory of the original Dusit Thani to the new hotel as much as we can,” he adds.

The hotel’s facades were done in Thai-style arches resembling lotus petals, rising from floor to the upper lobby. They also resemble the arches seen at Wat Benchamabophit (known as the Marble Temple) in a majestic amalgamation of styles. The arches were intricately decorated with pieces of mosaic in shimmering gold and deep green. Chanin hopes to bring part of them to the new hotel too. The facades were built as Thaistyle arches resembling lotus petals, rising from floor to the upper lobby.

One of the challenging tasks for Silpakorn’s experts is to preserve the entire two five-tonne concrete columns and a five-metre-long mural by the late celebrated artist Paiboon Suwannakudt, aka Tan Kudt, regarded as the neo-traditional pioneer in the modern reinvigoration of Thai mural painting. These two columns are used to support the structure of the Thai restaurant Benjarong while the mural graces the restaurant’s entrance. Benjarong’s intricately carved timber ceiling will also be carefully dismantled for further use.

“The Faculty of Engineering and Industrial Technology will be responsible for removing the two columns and the mural with a minimum effect on the original works while the Faculty of Painting, Sculpture and Graphic Arts is tracing the paintings as the references for restoration. As these columns and the mural have to be kept for at least three years before being reinstalled at the new hotel, the Faculty of Archaeology will maintain them in their original condition while also taking time to research Tan Kudt’s works, particularly those created during the same timeline,” says Asst Prof Chawalit Khaokhiew, dean of Faculty of Archaeology. Two concrete columns at the Benjarong restaurant were hand-painted by the celebrated late artist Paiboon Suwannakudt, aka Tan Kudt.

The columns and the mural of Tan Kudt were painted in tempera and incorporate the traditional technique but with a contemporary twist, says Amrit Chusuwan, art instructor of Silpakorn University.

“In the mural, Tan Kudt painted the sea in gold to illustrate Suvarnabhumi or the golden land and the patterns and motifs are in contemporary style. The graceful human figures and their postures were probably inspired by Thai performing dancers and the boats were painted in fantastically curved forms,” he adds. Tan Kudt’s daughter Phaptawan Suwannakudt says that the paintings at Dusit Thani were created between 1969 to 1970, about the same time of his works for the Pupingrajanives Palace in Chiang Mai and Wat Theppol in Bangkok’s Taling Chan district.

“The paintings at Dusit Thani are distinctive because no artists in that period had worked on such a large scale in Thai contemporary style. At Wat Theppol, my father volunteered to paint the mural in the Ubosot (ordination hall) and invited monks and novices to join his project using art supplies left over from the Dusit Thani project. Unfortunately, it isn’t yet completed but our family wants to fulfil his dream and carry on with the project,” says the Sydney-based Phaptawan.

The Faculty of Painting, Sculpture and Graphic Arts recently invited 20 leading and emerging artists to create works related to the hotel and their works will be displayed on December 20 as part of an event to be held in memory of the hotel before it closes its door.

The entire research and preservation process as well as the documenting of the dismantlement of the hotel in both photo and VDO formats will be later compiled in a digital book for free download. The Faculty of Music has also composed a special song for the hotel. “The landscape of the new version of Dusit Thani Bangkok will be easily accessible and friendly to the public no matter whether they travel by Skytrain, subway or road. The green space and the idea to connect the original hotel and the new one with valuable components and emotional attachments will preserve meaningful memories,” says Suphajee Suthumpun, Group CEO of Dusit International.