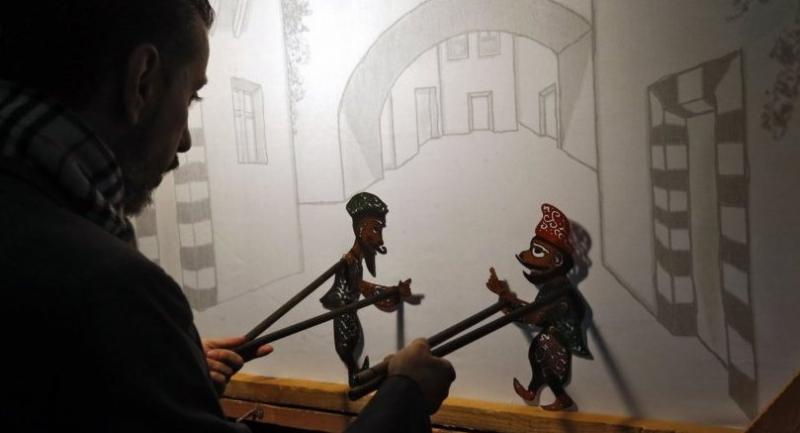 Syria’s last shadow puppeteer Shadi al-Hallaq is seen moving his puppets Karakoz, right, and Eiwaz, left, from inside his booth during a presentation in Damascus. /AFP

UN listing gives a lifeline to Syria’s last shadow puppeteer but will it be enough to save the tradition?

Hiding inside his booth and moving the silhouettes around on sticks, Shadi al-Hallaq gave a proud performance last week after his disappearing art finally received international recognition.

The war-battered country’s shadow theatre has secured a coveted place on the UN’s list of world treasures.

“When they rang to congratulate me, it was like a day dream,” says the puppeteer, a slim 43-year-old wearing a dark grey suit and warm beige scarf. His two star characters – the naive but charming Karakoz and clever friend Eiwaz – would finally receive the limelight they deserved, he adds.

“There’s no one in Syria who masters the art except me,” says Hallaq, who learned it from his late father, a famed storyteller who performed in one of the capital’s oldest coffee shops.

“There are no regular shows anymore, though I have given performances in a few places over the past years,” explains the puppeteer, who previously worked as a taxi driver.

The advent of digital entertainment as well as mass displacement due to conflict have contributed to the gradual decline of the art in Syria, the United Nations says.

Only a few such performers existed in the country before the war broke out in 2011, and a leading shadow puppeteer has since gone missing.

A bright light would project the silhouettes of the puppets onto a silk screen, usually accompanied by dialogue and music. Syria’s last shadow puppeteer Shadi al-Hallaq is seen moving his puppets Karakoz, right, and Eiwaz, left, from inside his booth during a presentation in Damascus./AFP

Often including humorous social commentary, they would star Karakoz and Eiwaz, as well as female characters and talking animals.

Hallaq’s characters are crafted from cow leather, their clothes cut out with decorative patterns and painted with watercolours “so the light can shine through”.

Karakoz is short and dons a large red hat, while Eiwaz sports an elegant moustache.

As they move around before an arched alleyway, their witty banter entertains all generations.

“My audience are old and young – from three years old to old men in coffee shops,” Hallaq says. The art form is said to be centuries old, long before the war that has killed 360,000 people and displaced millions from their homes.

Some say Karakoz and Eiwaz are typical Syrians from Damascus, while others say they are in fact originally Turkish.

Since the United Nations cultural agency Unesco classified his art as “in need of urgent safeguarding”, Hallaq says things have been looking up for his art and its two stars.

“I thought I would have to bury them” away, he says. But now “a bright future awaits them in Syria. I will tour with them all over the country.”